Wolves Cubs And Best Of Mates 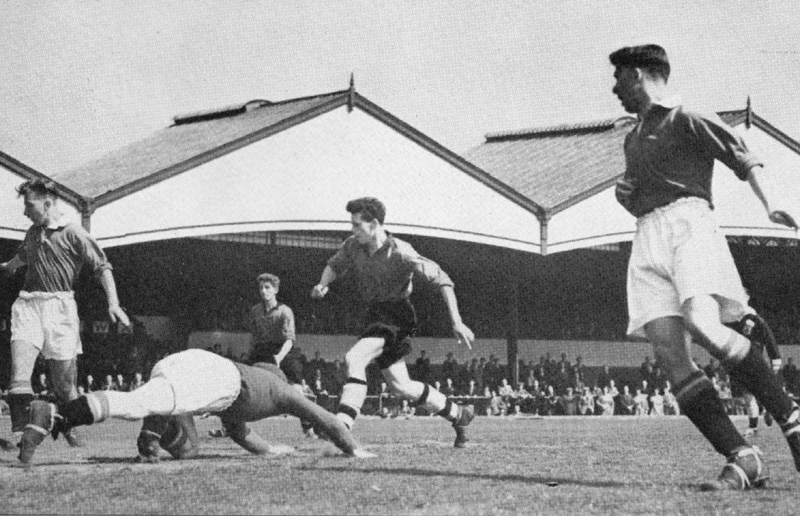 Harry Smith (centre) opens the scoring in the second leg of the 1953 FA Youth Cup final.

Nothing pleases us more on this site than to be able to fill in the gaps on Wolves careers for curious younger generations, so we are delighted to have been of assistance to the family of Harry Smith, the goal-scoring 1953 FA Youth Cup finalist whose death we mentioned in our monthly Dear Diary item on December 23.

Harry scored all of Wolves’ goals in their 9-3 aggregate defeat against Manchester United at the last hurdle in the inaugural year of the competition 61 years ago and passed away aged 78 on December 17.

One of the guests at the funeral at Bushbury Crematorium on Friday was Brian Punter, a close friend of his in childhood and well into adult years, and the man who took the trouble to inform both the Express & Star and ourselves of the sad passing.

Our earlier write-up was spotted by Harry’s Solihull-based granddaughter Eleanor on an Internet surf and she subsequently sent us a variety of photos and cuttings as well as a plea for any more information on him.

So, in addition to putting her in touch with Brian Punter to help her work on a family tree, we have learned much more ourselves about how the careers and lives of the two men were strangely entwined.

“Harry and I were great mates and lived a quarter of a mile or so apart as boys off Cannock Road, Wolverhampton,” Brian said today. “He grew up in Springfields, although he was born in Wales, and my parents were in Park Village. We were born within a few days of each other in August of 1935.

“We played in the same sides at Wolves and later for Kidderminster and Bromsgrove and knocked about together by going to the pictures and the Civic. We were even rivals at 440 yards as we were both pretty successful as athletes and he was an English schools champion at the distance. He was the obvious choice as my best man when I married in 1957.” 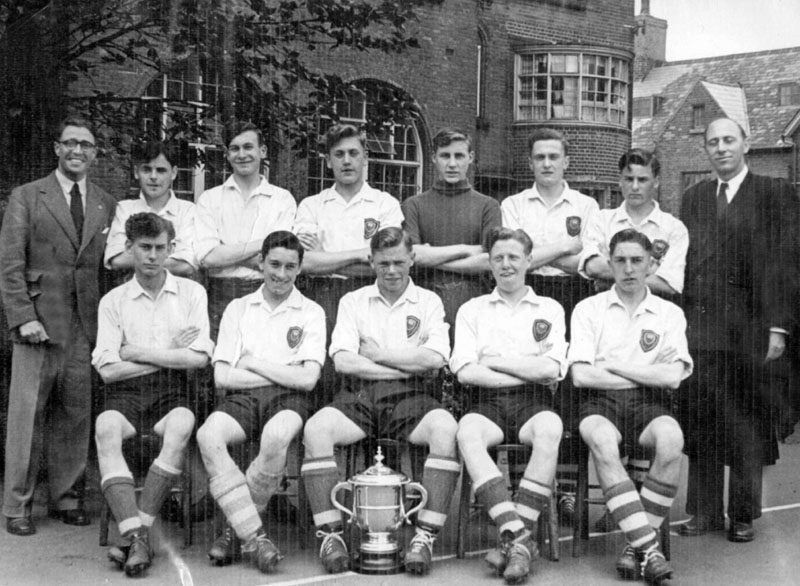 Harry pictured one in from the left on the front row of one of his successful school teams.

Sadly, neither progressed past the reserves at Molineux, although there was another good reason beyond the obvious fact that Stan Cullis had an abundance of talent at all levels of the club. Both also did well in business during and after their football careers and made the decision fairly early to prioritise office life and family needs ahead of clamouring for opportunities lower down the Football League.

Brian, a right-winger who was seen more as an inside-forward in his three games for the England youth team, also played in the 1953 Youth Cup final. But his involvement was limited to the first leg at Old Trafford, where he suffered a serious ankle injury on a heavy pitch and was sidelined for the return at a sunny Molineux five days later. The fact he was limping heavily for 70 minutes in those pre-substitute days partly explains why Wolves lost 7-1. The second leg was drawn 2-2.

There’s an unusual story behind the two men’s joint service at their later clubs as well and Brian added: “John Paxton had been on Wolves’ books and he came to my parents’ house in Prosser Street to ask if I would be interested in going to play in the Southern League for Kidderminster, where he had been playing for a few years.

“I signed for them and Harry went at the same time. We both had motorbikes, so we used to ride together to matches and to training twice a week. I had a 500 Matchless, which we used because it was bigger than the two-stroke machine he had!

“Gerry Hitchens was there as well and was competition for Harry for the centre-forward position before going on to Cardiff, various Italian clubs, Villa and the England team. Harry scored five in one match against Kettering and I scored twice in the first 90 seconds of another against Gloucester.

“We then went together to Bromsgrove and played with two other lads who had been at Wolves – a tall half-back called Arthur Wainwright and a brilliant left-sided midfield player, Frank Bolton, who had played in the England schoolboy team with Duncan Edwards and been a member of our Youth Cup final side in 1953. It was probably only the fact he was small that stopped him doing well for Stan Cullis.

“Bromsgrove were in the Birmingham League, so we were able to concentrate on our jobs as we didn’t have to face all those trips to the south coast that we had made with Kidderminster.”

Smith, who had attended Wolverhampton Grammar School, stayed in contact with Punter until around the age of 40, although news of him continued to reach the latter for many years after that through sister Denise, who lived near Brian in Wheaton Aston. 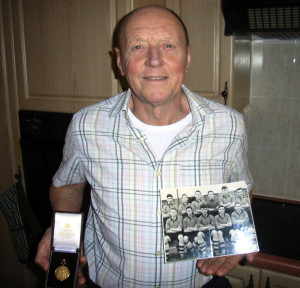 Harry’s last family home was in Tettenhall but he previously lived in Wolverhampton and Finchfield and had three children, the middle one of which is Simon, the father of 21-year-old Sheffield University economics student Eleanor.

While Brian worked in engineering as a design draughtsman and made an unlikely return to League football with Leicester and Lincoln, Harry became a successful architect, with the Croydon branch of Lloyds Bank and McDonalds outlets in Manchester and Neasden among his designs.

Among their other team-mates in the 1953 Wolves youth side were Eddie Clamp, Colin Booth and Ron Howells.