A Question Of In-House Pride

Memories Of A Famous Day In Molineux Calendar 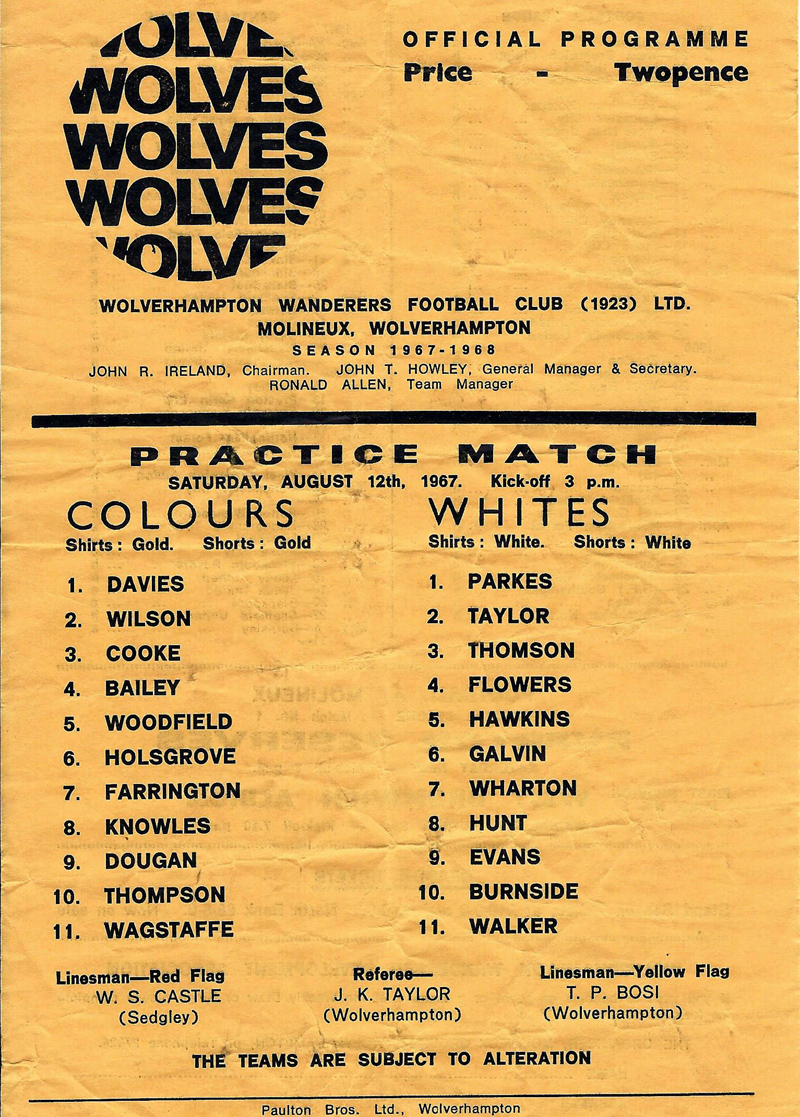 The line-ups as Wolves’ squad jostled for places for the top-flight kick-off.

It barely warrants a mention in the record books and never a point – nor, presumably, a win bonus – changed hands. You will even struggle to find confirmation of the results. But the annual Colours v Whites fixture at Molineux has its own place in history.

Made famous by the decision of Billy Wright to use the 1959 version as his emotional swansong as a player, the game was seen for years as the curtain-raiser to a season as well as the chance for hopeful reserves to bring established senior men down a peg or two.

It was essentially the Probables v the Possibles; those occupying places in the first team going up against those straining at the leash to displace them.

Attendances were far in excess of what many pre-season games now attract and there was the pleasant off-shoot of local charities benefiting from a sizeable donation out of what was taken at the turnstiles.

The fixture began in the club’s 1950s glory years and ran until the summer of 1967, when the programme (cost twopence – and that’s old pence by the way) reveals how Ronnie Allen planned a deviation from the recognised norm.

With the return to First Division combat exactly a week away, he presumably embarked on a degree of mixing and matching with his line-ups rather than go for a firsts against seconds approach.

Hence the naming of two players in the Colours side who never made it to the senior side in League or cup matches – left-back David Cooke and forward Brian Thompson.

Bobby Thomson was one of those to be named in the supposedly weaker Whites team, so was Phil Parkes, who was already well down the road towards displacing the considerably older Fred Davies as first-choice keeper. Thomson and Parkes totalled some 65 matches between them that season.

The game had a 3pm Saturday afternoon kick-off and brought a 4-2 victory for the Whites. Ernie Hunt and Terry Wharton’s penalty had them two up just after half-time and, although Peter Knowles soon pulled one back, Wharton struck twice more to complete his hat-trick soon after the hour before David Woodfield netted ten minutes from time.

Evan Williams and fellow keeper Phil Weir were sent on for Parkes and Davies respectively as part of a flood of six half-time substitutions, which was made up by Terry Kingon going on for Dave Galvin, Bertie Lutton being introduced for Paul Walker, Stewart Ross for Cooke and Glen Andrews for Thompson. The referee was Jack Taylor.

It’s worth noting that the side for the opening top-flight fixture at Fulham the following weekend contained only five of the players who made up the Colours side – but no fewer than six from the Whites. And an unchanged line-up then played in the opening home game against Albion four nights after the 2-1 win at Craven Cottage, namely: Parkes, Taylor, Thomson, Bailey, Woodfield, Holsgrove, Wharton, Hunt, Dougan, Burnside, Wagstaffe.

We are grateful to the relevant back copies of the Express & Star for revealing that the Colours v Whites fixture also appears to have played a part in shaping Allen’s thinking 12 months earlier at the start of the 1966-67 promotion-winning campaign.

This time, two of the victorious Whites team (yes, the reserves often beat the first-teamers in practice matches!) were promoted for the Second Division derby at home to Birmingham – Ken Knighton and John Farrington. 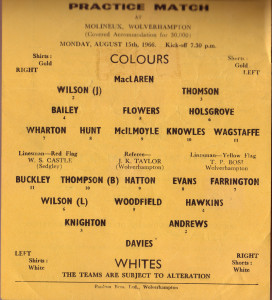 How they lined up at Molineux towards the end of World Cup summer.

In that curtain-raiser, which was played on a Monday night, Bob Hatton put the so-called underdogs in control with a brace before Wharton reduced the lead with a shot from Peter Knowles’ lob near the end. The attendance was 5,205.

The Colours v Whites game ceased after the 1967 staging and was replaced by the sort of home pre-season friendly we are more accustomed to watching today. St Mirren were August visitors to Molineux in 1968, followed over the next eight years by Kilmarnock, Hanover ’96, Groningen, Glasgow Rangers, Albion, Bristol City, Bolton and Coventry.

We wish to acknowledge the kindness of one of the participants in the fondly recalled curtain-raisers in providing these two team sheets. We will keep his identity under wraps for now but will be featuring him on the site in the coming weeks.