More On The Wonder Of Wath

As a follow-up to his article of December 8 – one we described as the finest piece ever written about Wath Wanderers – we were delighted to hear again from Charles Bamforth in California on the subject of Wolves’ famous nursery club….and some of the lesser-known individuals who played for them.

Few football journalists have enjoyed quite as powerful an insight into the game as Andrew Ward. He is the son of Tim Ward, a man who took the likes of Kevin Hector and Alan Durban to Derby before handing the reins to a bloke called Clough.

Andy has a very special outlook on what life is really like in the bowels of this business. Among his many offerings have been three books, Football Nation: Sixty Years of the Beautiful Game (with John Williams), Armed with a Football and Three Sides of the Mersey (with John Williams and Rogan Taylor). 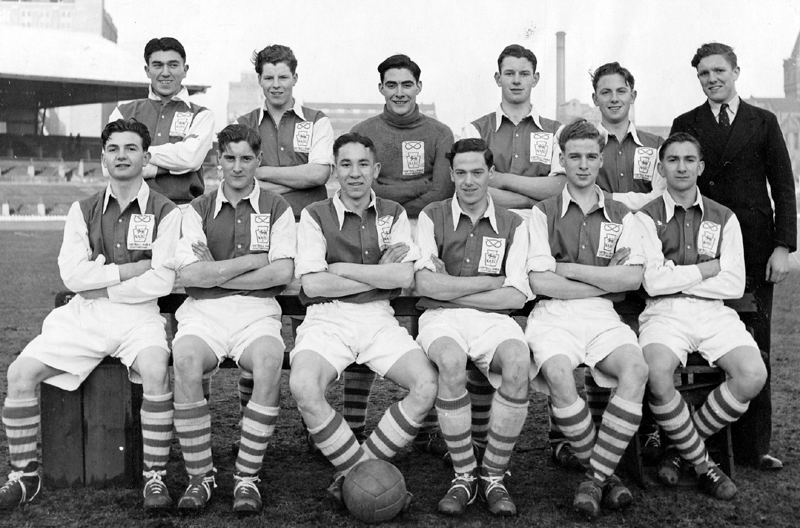 John Jarman, with the ball at his feet, pictured as skipper of Staffordshire’s National Association of Boys Clubs team in 1948-49. Immediately to his right, as the reader looks, is Phil Shaw – later to serve Wolves in a variety of roles, including that of club secretary.

And so, having turned in one article on Wath for this website, it occurred to me to re-visit Andy’s first book, co-written with Ian Alister (who nowadays is a psychologist in Cambridge), which detailed his father’s first managerial position, at Barnsley. I recalled that Wath had received more than a passing mention in the book, so I contacted him, wondering whether he had more up his sleeve. He had plenty, with several Wolves links beyond Wath Wanderers.

Andy and Ian kindly furnished some material about Barnsley players with a Wolves connection that was unpublished in Barnsley: A Study in Football, 1953 to 1959.

For starters, Ian had interviewed John Jarman, later to become a coach at Wolves, and wrote: “John Jarman was born in 1931 in the Rhondda Valley and moved to the Midlands in 1939. He was encouraged at school in Wolverhampton by a schoolmistress called Miss Padfield, who kept soccer at the school going during the war years and went on to be prominent in the town as vice-chairman of the local education committee. Between 1946 and 1948, Jarman played for England Youth and Great Britain Youth. When he left school, he was apprenticed as an engineer, which he kept up until he qualified at the age of 21. Wolves had taken him from the local boys club. They ran seven teams then. He went through to the Central League and was paid £3 a week as a part-timer. He had a few friendly games in the first team. On Boxing Day, 1949, he got a nasty knee injury against Baldwin of Blackburn in the Central League after taking a throw-in and getting a ‘hospital return’. They couldn’t decide for a long time whether it was a cartilage and he was out for nine months. When he was fit, he was farmed out to nursery club Wellington. He had only been there a month or so when Bolton showed interest and then Barnsley chairman Joe Richards came in person. John had never heard of Barnsley but Tom Stone, chairman of Wellington, was on the FA Council and a mate of Richards. The £5,500 fee was the highest Wellington had ever received.”

Alister also interviewed someone whose Wolves connection was not direct but who was as genetically linked as you could possibly be. It’s perhaps not widely known but Joe Bonson, Wolves’ strapping young centre forward from the 1950s, actually had a brother who was all of one hour older! His twin was Reg, who played as a part-timer for Barnsley and who went on to play rugby for Doncaster in the 1960s. 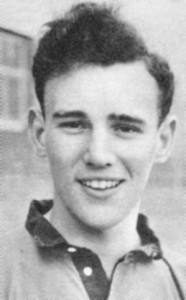 Andy Ward himself tackled (as it were) Henry Walters and wrote: “Born in 1925, he developed his game at Brampton Ellis School, between Rotherham and Barnsley. Seven of his school team, including George Robledo, played for Dearne Valley Boys. When Walters was 14, he came home from school for lunch one day and Mark Crook, who was a friend of Henry’s father, called to his home.

“According to Henry Walters, Mark Crook was ruthless. The main thing Crook looked for was guts. He reckoned that you could put skill and other things into a player but you couldn’t put in guts. On a Thursday night, he would pick a squad of about 15 for the Saturday match, talking in a broad Yorkshire accent. He’d start off with: ‘Thee, thee,’ then he’d miss a couple and say: ‘Thee,’ and miss another one, ‘Thee . . .’ He would choose 15 from a big crowd of players. Then, on the Saturday, he would say: ‘That knee’s not right’ and stand him down, even though the lad hadn’t had any knee trouble. On one occasion, when Henry was living in Brampton and Wath were playing at Wombwell, Henry, shy 16, was getting stripped and Mark Crook came up and said: ‘Stand down tonight, Henry, I want Dizzy Burton to play.’ Henry was already getting changed, so Henry’s Dad came up and said: ‘If he doesn’t play this time, he won’t play for you again.’” Henry played.

“Mark Crook had a beer-off (off licence) in West Melton. He was taking four players in his car one day and Henry was one of them. Henry was belly-aching because another lad had borrowed his boots and hadn’t returned them. Crook stopped the car after about 50 yards of the journey and said: ‘Look, forget about them, or get out of the car.’ Crook was blunt and ruthless but those were the only two barneys Henry had with him.

“Walters signed forms and graduated from Wath Wanderers to Wolves. He played his first game for Wolves in the War League, the first match of the 1942-43 season at Villa Park. Players were in the forces and gaps were left for the likes of 17-year-old Henry Walters. Until then, he had only played local football. The Villa names were ones he’d worshipped, and Stan Cullis was at centre-half for Wolves. At half-time, Henry couldn’t speak. He was breathless and thought he’d never stick it. After the game, he had to change and run to the station for the train.”

Walters played four games that season and ten the next. Andy picks up the story……

“Henry was a joiner at Cortonwood Colliery and, in 1943, was sent down to London on bomb damage duty, his first experience of staying away from home. He played as a guest for Clapton Orient and when Ted Vizard took over at Wolves from Major Buckley in 1944, Henry wrote to the new manager for permission to continue playing as a guest for Clapton. He spent most of his Wolves career as a guest player elsewhere. 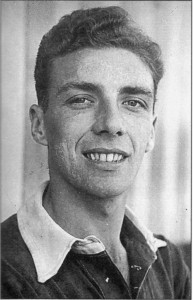 Henry Walters….in the Wolves system via Wath – and later played around 250 games for Walsall.

“He was transferred to Walsall in May, 1946, and on to Barnsley, his local club, in the summer of 1953. Despite missing a few seasons of competitive football during the war, he played over 400 League matches in his career and was still playing in 1960. A lovely man, a loyal football servant, he had a fine sense of humour. When colleagues teased him about the bald patch on the back of his head towards the end of his career, he told them it was because the manager kept patting him on the head and saying: ‘Good game, Henry, good game.’ His son John played cricket for Derbyshire in the 1970s.”

Ian Alister interviewed a second former Wath Wanderer……..“Born in 1932, John Thomas was the son of a coalminer. His father moved to Kent during the strikes of the 1920s and found work at the Betteshanger pit near Deal. When the family moved north to Askern, Yorkshire, his father became a committee member of the Askern Welfare football team. The war started just after they arrived back in Yorkshire but the only direct contact with action was a bomber that came down in a nearby park. He began to play football at Askern senior school but not seriously because there were only lady teachers. In the last year of the war, a few male teachers returned because officers tended to get demobbed earlier. He played for Doncaster Boys and Yorkshire Boys. He had the opportunity to go to Charlton or Wolves and he chose the latter because his father was ill and Wolverhampton was closer to home. He played for half a season at Wath with Ron Flowers and Dick Neal. Four of them were invited to Molineux for a Tuesday night trial but the weather was so bad that they couldn’t play.

“Wolverhampton Wanderers was the club. They ran seven or eight teams and sported beautiful swing doors and corridors. John Thomas signed as a part-time pro in 1949 and he trained two nights a week at Doncaster with Charlie Williams, who played for Doncaster Rovers before a career as a comedian and television presenter of The Golden Shot. Thomas played in the Wolves ‘A’ team for a season and a half. He was an electrician at the pit on a system of three weeks of days, one week of afternoons and one week of nights. The other lads didn’t mind him missing afternoons and nights because they could make it up and earn overtime. Football was looked on favourably. He never worked Fridays either, instead going on the train and staying overnight at the Queen’s Hotel, picking up his wages in the morning. He was selected for the reserves at Burnley in 1950 and they won 2-0. He stayed in a good second team for most of that season. In due course, he was asked by Stan Cullis if he would like to go to Barnsley for £2,000 with a guarantee of a first-team position. When he signed for Barnsley, in June 1952, he became known as ‘Joe’ Thomas because one of the trainers misheard his first name on the first day. After nearly six years at Barnsley, he went on to play for Mansfield Town and Chesterfield.”