In Memory Of Bert

Reunited – The Great And Good Of Molineux Life 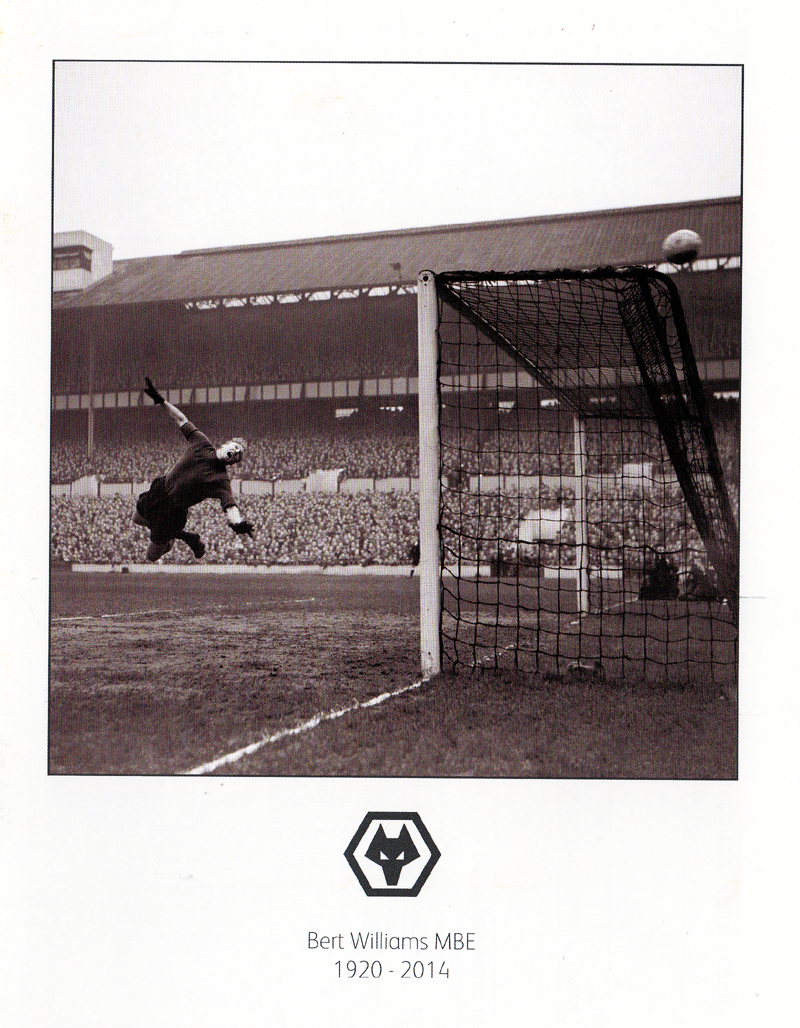 Football has known it for 20 years or more as Fergie time. Today, we were introduced to ‘Bert time.’

“If I can put it in terms many of you will be familiar with, he lived for the full 90 – and then for almost four more at the end,” the Reverend David Wright told a packed congregation.

Well, Bert Williams MBE did play 420 League and cup games for Wolves, a few high-profile prestige friendlies and 24 England internationals. Then he went on to be a huge success outside the game as well. It was a packed, utterly fulfilling life; one to which the Wolverhampton Wanderers family paid homage at St Peter’s Collegiate Church today, a few months on from showing their last respects to Dave Wagstaffe, Barry Stobart and Peter Broadbent.

“It’s almost too much for a city to cope with,” the Reverend added on this windswept, rain-lashed lunchtime of the proximity of the four farewells over which he has so sensitively presided. “Yet each one of these men leaves us with so much.”

We were reminded that Bert had, at a private ceremony last week, been laid to rest with his wife Evelyn. This was the ‘public’ part – more celebratory than mournful and as beautiful as such occasions can be.

One of the sadnesses of footballers living to the grand age of 93 is that there aren’t likely to be many team-mates around or able to turn out in final tribute.

Alf Crook and Ron Flowers were there from the late 1940s and early 1950s respectively, though, and Malcolm Finlayson, Bobby Mason, Les Cocker and European Cup goalscorer Alan Jackson were others in attendance from what we fondly term the glory years.

The later generations were represented by fellow keepers Fred Davies, Phil Parkes, Mick Kearns and Wayne Hennessey, Gerry Taylor, Derek Parkin, John McAlle, Peter Knowles, Steve Daley, Ted Farmer, Mel Eves and Steve Bull. Other notable figures in a turn-out which required standing room for a couple of dozen at the back were England great Gordon Banks, Stan Cullis’s son Andrew and his wife Liz, Stobart’s widow Maureen, Des Horne’s daughter Nicky, former Aston Villa and Manchester United defender Colin Gibson and long-time Albion director Joe Brandrick. Over the last two decades, there have been some momentous gatherings in this building for those with Molineux matters close to their heart – and this was another. 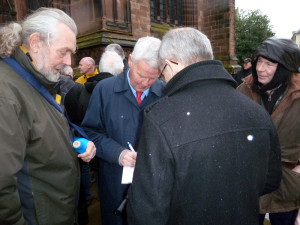 No doubt even more would have turned out had it not been for the appalling weather but no-one present would have missed it. And some fitted their attendance into hectic schedules that required them to be elsewhere soon after.

The Baroness Heyhoe-Flint, a club vice-president, had no sooner left a service at which she gave the first of the readings than she was on a train to London to sit in the House of Lords. Ian Winter followed up his brilliant tribute by voicing a piece to camera for BBC Midlands. And Wolves fanatic Glynne Wetton, who did so much to help the production of Bert’s 2007 book Cat In Wolf’s Clothing and then threw himself behind the keeper’s colossal efforts to raise £150,000 for the Alzheimer’s Society, missed the socialising at Molineux afterwards to act as chauffeur to the other great some called ‘Banks of England’.

The second tribute was delivered with characteristic aplomb by Bob Hall, a man not only well used to interviewing Bert but also to revering him, thick woollen yellow England jersey and all, as a young boy.

“Bert Williams; England and Wolves,” he said, referring to how the Charles Buchan publications of the time used to caption the photos of this strikingly good looking individual. “Players then used to mingle, travel on public transport and even have an occasional cigarette without getting into trouble. They played mostly in the community in which they were born and bred.

“Bert was a giant of a man but he had time for people and listened to them. People would go away and say: ‘I have just met Bert Williams.'”

Even the playing icons had their place in the hierarchy, though. Realising he was going to be playing in the 1950 World Cup finals in Brazil in the sort of steamy conditions England’s players will confront this summer, Wolves’ finest and most famous keeper wrote to the FA suggesting he be allowed to wear a cooler nylon jersey rather than the heavy-duty one he was used to pulling on in English winters. The reply was prompt: “Dear Williams. Thank-you for your letter. We will not be pursuing your idea.”

On my way out this morning, I looked out my copy of Charles Bamforth’s book In Keeping with Wolves, thinking it would be appropriate to re-read what he had written after his long interview with Bert in 1992. The flick-through the index to see which chapter had been devoted to the boy from Bradley was hardly necessary. It couldn’t have been anything other than no 1, could it?

Hall pointed out that Williams had died almost 20 years after another of Wolves’ ultimate golden boys, Billy Wright. And he added poignantly: “There are two statues outside Molineux. I reckon they should be making room for a third.”

The man who played in the club’s goal for 12 seasons has had a corporate area named after him in the main stand for two decades and was one of the first inductees to the Molineux Hall of Fame. In death, as in life, he has had some of his great kindness returned.

Matt Murray, who is said to have spoken outstandingly at the private family funeral, donated a five-figure sum out of his testimonial proceeds to Alzheimer’s and the Society, in turn, delivered flowers to today’s service. There was also a collection in church for a dementia ward at the city’s New Cross Hospital.

The order of service card carried a photo of which Bert would have fully approved. Sepia-tinged, it showed him hurtling across his goal as a Tottenham effort narrowly clears the bar, with or without his intervention, at a packed White Hart Lane – the ground where he earned his Il Gattone nickname on the day of his fourth England cap.

He didn’t just hurl himself across the turf. The Reverend Wright recounted how, workaholic that he was, Bert had once disappeared along with a cement mixer into a swimming pool he was constructing at home. Just as well that a Cat has nine lives……..

It was fitting that this frequent Wembley winner had Abide With Me as the first of his hymns. Jerusalem followed and Land of Hope and Glory was the exit music. The Cannock Chase Orpheus Male Choir, all kitted out in Wolves, England or Walsall scarves, gave a quality performance of their own – ‘a high-class South Bank’ as they were described – and, from Bert’s daughter-in-law Tanya Williams. came the recital of ‘I Have Seen’, one of the many poems he himself wrote. 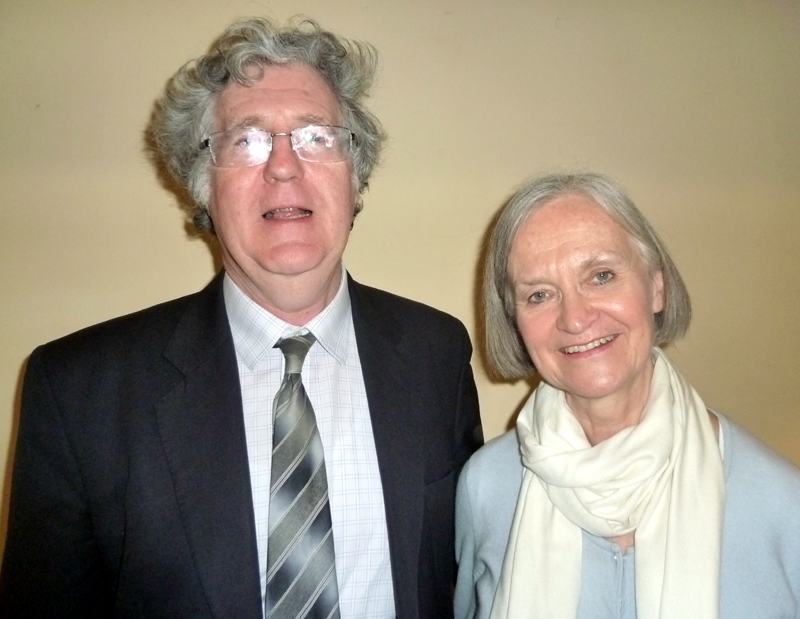 Ian Winter had had the pleasure of Bert’s company more than once in recent years, notably when reuniting him with one of his greatest fans, Gordon Banks. He lifted the lid on a little-known craving – for egg custards – and spoke also of the lucky black cat card he received from a fan before the 1949 FA Cup final and which he kept, immaculate, for 60 years.

“The family tell me they have been overwhelmed by the tributes and the good wishes they have had from so many people,” Winter added. “Until recently, he still received requests from all over the world, many of them just addressed ‘Bert Williams, Wolverhampton, England.’ They all made it safely to his home in Shifnal.

“I once asked him if he had any regrets and he said he would have loved to have played until he was a hundred. In conclusion today, I will use a phrase Bert always kept for visitors: ‘Thanks ever so much for coming.'”