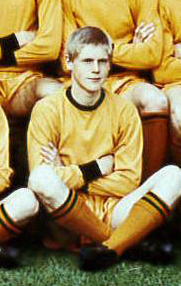 We are grateful yet again to Charles Bamforth for using his detective skills to track down and catch up with another Molineux youngster of his youth – one who didn’t make the grade at first-team level. Here’s his latest offering……

It must be a nervous period for senior professionals at a club whenever there is a new man at the helm. Do their faces and, more importantly, their skills fit the ideals of the fresh regime?

Well if it’s worrying for the established pros, imagine how it must be for the kids. To illustrate, we have been chatting with Ken Wade, who seemed to have every chance in the world when Wolves recruited him but who was one of a raft of youngsters that Bill McGarry decided he could live without.

Born in 1951 in Peterborough, Ken was at primary school at nearby Old Fletton, then at secondary modern in Orton. “I was captain of Peterborough and Northamptonshire schoolboys,” he said. “We had a great run in the England Schools Trophy but got beaten 2-0 at London Road in the quarter-final by Kirkby Boys, for whom Terry McDermott ran the show. Gerry Farrell was in their team.

“I always was and always will be a Peterborough supporter and they wanted to sign me. But they had a poor youth policy at the time. Norwich, Ipswich and Nottingham Forest were all keen but I had set my heart on going to Wolves.

“I played for an England Boys XI at Forest in September, 1966 and Wolves signed me after that. I had already spent a week at the club, training with the youth team and having a day with the first-team squad.

“I joined the groundstaff in 1967. We would sweep the North Bank on a Monday and I reckon I collected more cash that way than came in my pay packet! I cleaned the boots of Mick Bailey and Derek Dougan. I was in digs with Ian McDonald but I was closest to another lad called Tom McAteer.

“The coach Ron Bradley was a tremendous bloke – so good to the young players. The senior coach Gerry Summers was very strict. But I liked it at the time. You think you’re the dog’s-you-know-what and he brought me down to earth.” 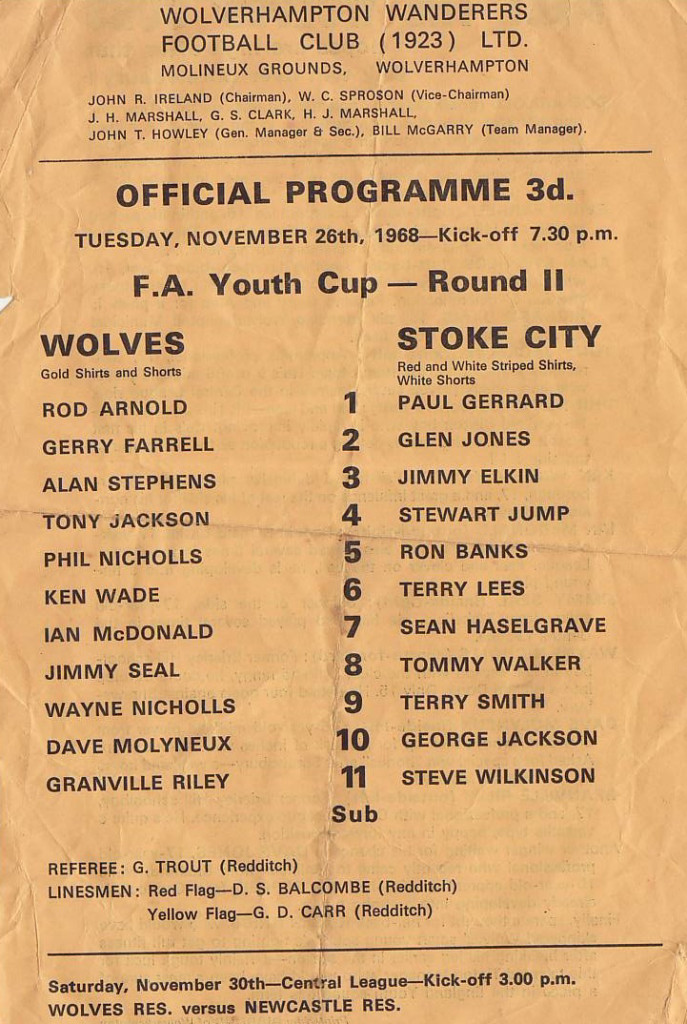 On the team sheet…..

With more teams to be filled in those days and much larger playing staffs as a result, the drop-out rate was understandably high.

Many a talented youngster failed to break through the log-jam of quality performers above him and it must have been a daunting proposition for a teenager away from home for the first time.

“There were lots of promising young players, many from up north and with quite tough backgrounds,” Wade added. “To be honest, I felt a bit of an outsider at first but soon found my feet and realised that, to make the grade, you had to be really strong both on and off the field.

“My preferred position was right-half. I fancied myself as another Mike Bailey. What a tough nut he was! But I never quite made the second team, although I was a regular in the West Midlands League side. I tore my cartilage, which saw me spend six weeks in Patshull. Derek Dougan, who I was a big fan of at Posh, was so good to me, my girlfriend and my parents at the time. He visited me a lot.

“Ronnie Allen called me into his office and the word was that I was going to be signed as a professional. That same week, he got the sack. McGarry came in and got rid of all the youngsters in 1969.

“I came home and had discussions with Peterborough. But their manager Jim Iley wouldn’t look me in the eye when I went into the office to sign. There was a bit of a confrontation over £10.

“He wanted me to go off and play with the reserves at Southampton but I went home and told my dad that it just did not feel right. Next day, Alec Stock called and I signed pro for Luton. I was on the fringe of the first team several times. Then there was a youth game at Charlton in 1970 and I had a big fall-out with the coach. Least said about that the better. That was it……….I guess when you’re young, you do some silly things.

“So I went part-time and played for March Town, Stamford and St Neot’s. But I got a bad ankle injury and was working by now with my dad in his shop and soon I went in as a partner. I finished football, got married to my childhood sweetheart Jackie, who supported me throughout my career, and I have been a shopkeeper ever since, selling first hardware, then bikes and most of all fishing tackle. I love it. 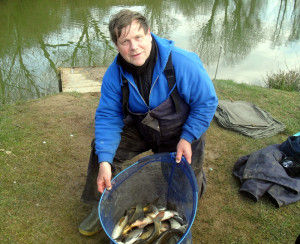 You should have seen the one that got away…..Ken in recent times.

“To be honest, though, it was heart-breaking to leave Wolves. I really thought they were my future. I just folded up my scrapbook and put it away and hadn’t looked at it since until you got in touch. My daughter is 38 and had never seen it.

“But my grandkids picked me out on the squad photo – and now I can’t stop looking at this website! They were great times, with some sad times, but it was something I would do again, that’s for sure.”