A Plethora Of Molineux Old Boys

Former Wolves players from various generations – in particular those from the last 20 years or so – are covered in this, our monthly diary item.

Saturday, February 1: Watched the extended highlights on The Football League Show of the QPR v Burnley game and couldn’t help noticing how many former Wolves players were involved.  Six of them – all brought to Molineux by Mick McCarthy – were on show in the exciting 3-3 draw; Karl Henry and goal-scoring debutant Kevin Doyle for Rangers, and Sam Vokes, Michael Kightly, Jason Shackell and David Jones for their promotion-chasing rivals. 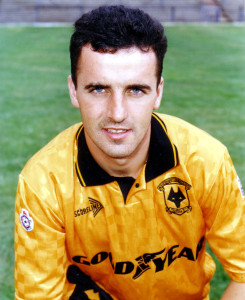 Paul Cook….as we in these parts remember him.

Tuesday, February 4: Made my first visit to Fleetwood to watch the first leg of the Johnstone’s Paint Trophy northern area final against Chesterfield and was delighted to meet up with the Spireites’ manager Paul Cook and their chief executive Chris Turner. Both are well known to us from their Wolves time, so I was delighted to see their side record the victory that leaves them well placed to book a place in the final at Wembley. Also managed to introduce myself to Eric ‘Elvis’ Nixon, Chesterfield’s goalkeeper coach, after Chris had told me three more bookings had come his way following his performance as The King at the Proact Stadium a week and a half ago.

Wednesday, February 5: Had a feeling of deja vu when asked by BBC WM to do an interview on the way out of Bert Williams’ memorial service. I’m always happy to oblige the good people there – they have always been kind and supportive to me – but fear I am becoming too regular a voice on the subject of bereavement, so requested that they might instead target those who actually saw Bert play. Completely by coincidence, saw Fred Kemp just before the service while sheltering from the rain in Costa Coffee. I assumed he was going, too, but he explained that he barely knew him and was instead on his way to a business meeting.

Saturday, February 8: This one will never find a place in the annals of Wolverhampton Wanderers history but the postponement of the League One game at Stevenage is not without a curious significance. It is 56 years ago today since the most famous postponement Wolves have ever experienced – the one of the table-topping clash with Manchester United at Old Trafford two days after the Munich air crash.

Monday, February 10: Mick Gooding turn away now!! Emailed some photographs to the daughter-in-law of the hard-working late-1980s Molineux midfielder for a surprise album she is putting together as a present for him. We’re always happy to help with such requests and have had an amazing few weeks for being contacted by relatives of former Wolves players, many in the much more distant past. A lot more will be written about those matters on here in the coming weeks. In the meantime, hope Mick doesn’t read this post and have his surprise spoiled! 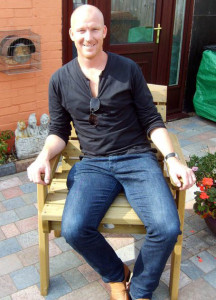 Thursday, February 13: Received an email from Neil Emblen telling us he had picked, in his role as caretaker manager of the New Zealand national team, his squad for a friendly against Japan in Tokyo. He has stepped up from his role as assistant while the search goes on for a permanent successor to another former Wolves man Ricky Herbert, who resigned in November. Can’t be beyond the realms of possibility that Neil could one day land the top Kiwi job or manage over here, although he would presumably have to sacrifice his enviable lifestyle there and properly famliarise himself again with the English game.

Thursday, February 20: Well, well…..another chat with Paul Cook is planned for much sooner than I expected. Have been asked to do the question-and-answer interview with him for the Wembley programme after Chesterfield edged past Fleetwood by the odd goal. There! It was worth braving a bitterly cold night at Fleetwood after all. Interesting that Cookie will be up against another left-footed former Wolves midfielder in Peterboorugh boss Darren Ferguson – a team-mate of his at Molineux for seven or eight months in 1994.

Monday, February 24: Had a coffee in Wolverhampton with Isle of Man-based Wolves fan Richard Allen, a former Express & Star colleague who is back on the patch for a family visit. After a call at the Molineux club shop, Richard also set off to one of the Birmingham hospitals to see another of his friends, fellow islander Tony Cowley, who had the misfortune to be badly hurt in a collision with a car a few hundred yards from Molineux just before the home game against Bristol City in January. We add our own very best wishes to Tony – a truly incredible supporter of all things gold and black – for a speedy return home and full recovery.