Blurring The Lines Between Home And Away 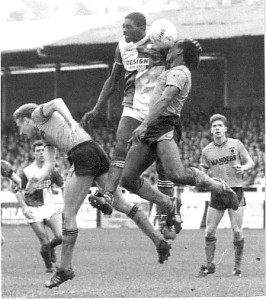 Wolves, in particular Mark Venus and Floyd Streete, under aerial threat in a 0-0 draw at Twerton Park in 1988-89.

Football is traditionally split into two; two teams, two halves to a pitch, two halves of a match. Fixture lists, likewise, are divided into two equal portions comprising games played on your ground and those staged on your opponents’ patch. But not always.

We decided to delve into the archives to share some memories of when Wolves have played League fixtures at the home of a third party.

We will rule for now that Bristol Rovers were playing at a permanent home when they used Twerton Park, given that they never went back to Eastville, and are overlooking the visits to Brighton in fairly recent years as we are much more retro than that as a website.

So we came up with these four clashes from the last late 1960s onwards and wondered what recollections our readers had from these trips, or from others in the same sort of era that we may have overlooked.

This clash of East Midlands v West Midlands was played at Notts County after a fire at the neighbouring City Ground during a First Division game against Leeds several weeks earlier and hardly provided riveting entertainment for the 19,490 crowd.

In what proved to be Ronnie Allen’s penultimate away game as manager, Wolves had mixed fortunes from their first trip to Meadow Lane since losing 3-1 there in April, 1932 – the month they secured promotion back to the top flight.

Forest had climbed off the foot of the table only the week before while Wolves were below half-way after winning only two of their previous ten League matches and gone out of the League Cup at Blackpool along the way.

A draw was therefore satisfactory for both, probably more so for a Forest side whose next home game – against Arsenal – was exactly that. After the Wolves clash, they moved back across the river, having been ‘lodgers’ for six matches.

Misbehaving fans the previous spring cost Leeds the use of Elland Road at the start of what was to prove a tumultuous and controversial season for them – and Wolves were one of the visiting teams who had to alter their travel plans as a result.

Leeds Road rather than Leeds itself was the destination for Bill McGarry’s side at the start of the second week of the 1971-72 First Division campaign and the teams fought out a goalless draw that was nothing like as dramatic or decisive as the 2-1 win Wolves managed in the return almost nine months later.

The trip to Huddersfield, where Wolves had prevailed 2-1 against the Terriers the previous April on their way to a final placing of fourth, saw a promotion for John Richards after his substitute duty in the 3-2 defeat at Liverpool four nights earlier. 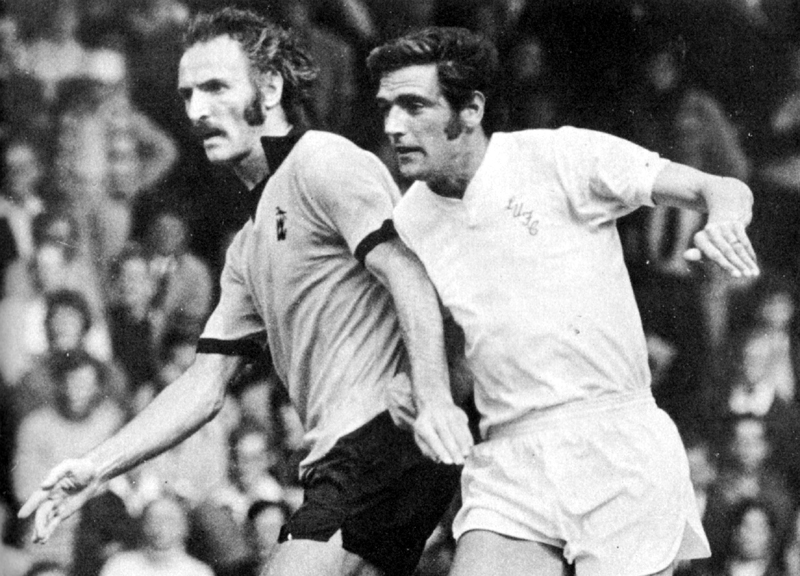 It was only his ninth League appearance in the starting line-up – and four of those had been against Don Revie’s side. The young striker didn’t find a way through on this occasion but the deadlock was still a satisfactory outcome.

Wolves had lost all four of their previous trips to Leeds since promotion but were maybe helped by the lower-key setting this time. The crowd was a less-partisan-than-usual 20,686.

Graham Turner’s Wolves were in their momentum-loss phase when they headed for this Tuesday night assignment with long-time nomads Charlton.

Not just in the longer term – this was the second of the 14 consecutive seasons they would spend at the second tier of English football – but also in the short run. Having climbed into a promising promotion-challenging position, they had lost alarmingly three days earlier, 5-0 at home to Barnsley, and needed a quick response at ‘neutral’ Selhurst Park.

But, with Steve Bull the chief culprit, they missed a host of chances to turn a decent performance into maximum points and then suffered the additional blow of seeing Kim Grant convert Robert Lee’s cross at the other end 15 minutes from time.

With a meagre 6,853 spectators rattling round Crystal Palace’s spacious stands and terraces, the Ghanaian international’s first League goal meant Wolves’ run of five away draws in a row ended in the way they definitely didn’t want. They hadn’t won on their travels since beating Hull on October 20.

And they had become pretty toothless on the road, their only away goal since the turn of the year coming via Bristol Rovers’ Geoff Twentyman in a draw at Twerton Park.

Wolves’ last visit to Upton Park before this had brought a 4-0 defeat on the final day of 1989-90 and they hadn’t won there since 1977-78 but they found the venue much more to their liking amid a time of renewed hope 22 seasons ago.

None more so than Tom Bennett, who scored the first goal of what was then a Wanderers senior career spanning three and a half years by rifling in the late clincher from a seemingly impossible angle.

Steve Bull, whose name had been sung to the rafters by the travelling fans when a visit to West Ham constituted his last domestic game before Italia 90, had opened the scoring just before half-time against a side containing Alan Pardew. 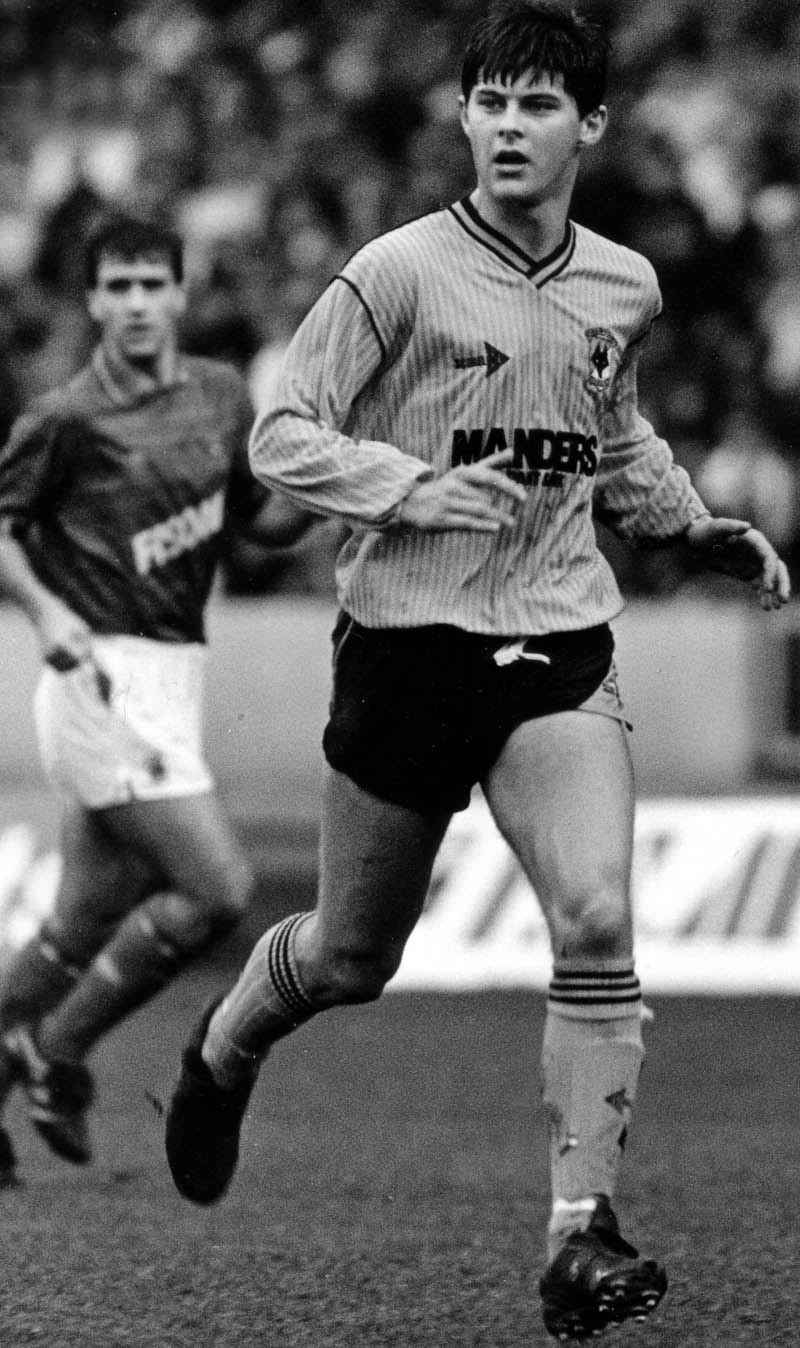 Wolves’ Wednesday night victory was their third in what would become a sequence of five successive League wins in a mid-season revival that followed the gloom of a nightmare autumn. They had lurched into the nether regions of the Second Division table, then briefly flirted with a sustained push for the play-offs and finally had to settle for a place among the also-rans.

The night in East London had other curiosities. With Charlton having failed to win any of their previous seven ‘home’ games and attracted only 4,101 for the draw against Oxford in mid-January, away fans were allocated the entire East Stand and Graham Turner had his own take on the eerie setting. “We’re well used to seeing empty stands at Molineux,” he said, with a reference to the fact the North Bank and Waterloo Road Stands were at that time shut and about to be rebuilt.

Sizeable a draw that they were, Wolves attracted an improved crowd of 5,703 for the Charlton game – but would go nearly another 20 years without winning again at Upton Park.