A Possible Case Of Extra Keen!

Rangers Legend Was In Molineux Sights 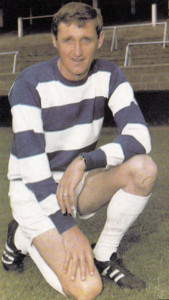 It is well known that Kevin Keen’s impact on Molineux life stretched to more than just the 54 first-team games he played for them in a 16-month stay from the summer of 1993.

Much more under the radar than the scoring of some significant goals AGAINST them, though, is the fact that he may conceivably have become the second player from his close family to sign for the club.

One of our recent visits to Wolverhampton’s excellent archive library, namely the former Molineux Hotel, revealed that the 47-year-old’s late father Mike was lined up as a possible mid-1960s target when emerging as a legend at QPR.

Keen Snr played no fewer than 439 senior games while at Loftus Road (with 44 goals) to stand seventh in the club’s list of all-time record appearance makers. But reports from half a century ago suggest that Wolves’ eyes were very much on both him and another son of High Wycombe, his Rangers team-mate Tony Hazell.

In November, 1964, with the departure of Stan Cullis still a fairly recent memory, the manager’s successor Andy Beattie went to scout Keen, a tall and powerful wing-half, in a home Third Division fixture against Luton. He could hardly fail to have been impressed.

Keen hit a second-half hat-trick in his side’s 7-1 victory after the scoring had been opened at the other end by none other than David Pleat.

Rangers boss Alec Stock described Keen around that time as the best half-back in the division, which may have been another way of saying that relegation-bound Wolves would have to pay big money to land him.

Clearly, nothing positive transpired and Keen went on to captain the club to the unique double of Third Division champions and League Cup winners in 1966-67 – the same season in which top-flight football was being restored at Molineux.

“I didn’t know about that Wolves connection but QPR went on to win promotion again the following season and then come straight down,” Kevin told us. “I was actually born two weeks before the League Cup final, which explains that I was too young to ever see him play for Rangers.

“I’m told I was taken to see him play for Watford and possibly Luton later in his career and remember being at those grounds with my grandfather. The only definite memories I have of watching him play, though, were in Sunday football after he retired in 1975.”

Keen was Watford manager – player-boss for a time – immediately before Graham Taylor was appointed and, after a spell on the QPR coaching staff, was in charge at Northampton, Wycombe and Marlow.

Rangers’ cup! And all this after Albion had led 2-0 at half-time at Wembley.

He then linked up with two other ex-footballers, Martyn and Viv Busby, to run a sports shop in their home town of High Wycombe.

Kevin also made an imprint on Wycombe before entering the higher echelons of the game, becoming their youngest first-team player when appearing in an Isthmian League for them at 15 years, 209 days in September, 1982.

Already an English Schools Trophy winner with High Wycombe under-15s, he became a West Ham apprentice at 16 and followed the winning of several England Schoolboy caps by playing 15 times for England Youths.

In around 250 Hammers appearances, he played in FA Cup and League Cup semi-finals and was an ever-present in the 1992-93 campaign which immediately preceded his £600,000 move to Wolves. Strangely, his last match for them was the home victory over Cambridge that secured their rise to the Premier League.

“I remember scoring with a diving header at home to Wolves in 1989-90,” he added. “It was the last game of the season and I came off, so Liam Brady could go on for the last match before his retirement and score a stunning goal.

“We won 4-0 – Keith Downing, who I worked with at West Brom until a few months ago, reckons it was because Wolves had played a hard game at Oldham a couple of days earlier and were tired!

“I played once or twice for West Ham at Molineux as well, in addition to winning a penalty at Upton Park against them (off Lawrie Madden) at the first home game after Bobby Moore had died. But I suppose the other thing Wolves fans wouldn’t thank me for was scoring against them on my home debut for Stoke in 1995. I stuck one past Mike Stowell at the Boothen End but Bully equalised, as he often did!”

Following his Hawthorns stint alongside Steve Clarke, with whom he also worked at West Ham and Liverpool, Keen is now back living in Amersham, Buckinghamshire, ‘about two miles from where I was born.’

Lichfield was his chosen Midlands base, as it was when he moved to Molineux for £600,000 in the big summer of spending that also brought Geoff Thomas, David Kelly, Peter Shirtliff and Cyrille Regis to the patch.

“Some of our friends are in that area from when I was at Wolves and Stoke, so it seemed sensible to get myself a flat there this time,” he added. “David Kelly lives that way. Most football people are acquaintances but he’s a good friend.

“I’ve also seen Mike Stowell around and he’s obviously doing a good job at Leicester. Paul Cook and Mark Venus, as well as Keith, are others from my Wolves time who have had various jobs in the game.

“A lot of us seem to have gone into management and coaching, certainly more than I remember from West Ham, where a lot of my ex-colleagues now have media jobs.” 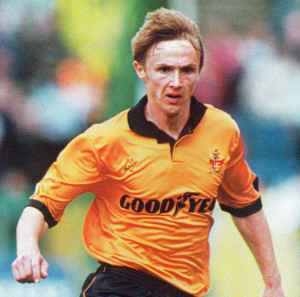 Understandably, he regards himself as having plenty of his career still ahead of him and is currently going to a couple of matches a week, with Colchester and Oxford on his recent schedule, plus venues in the Premier League and non-League.

Possibly the best week of his Wolves career was when he scored at home to Birmingham and Albion a day or two either side of his 27th birthday.