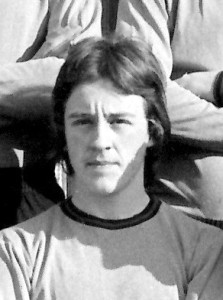 The young Mark Duncombe in his Wolves-mad teenage years.

One of the individuals Charles Bamforth interviewed at length for his recent in-depth look at Wolves’ 1975-76 FA Youth Cup run was Mark Duncombe. Here, he tells more about a youngster who was Wolves-crazy long before and after he tried to make it with them.

Some players find it nigh on impossible to hang up their boots. Exhibit one: Mark Duncombe. It is 40 years since he played in the first XI at The Royal School, Wolverhampton, yet he still turns out for Mel Eves’ Wolves All Stars team.

“I was a big Wolves fan as a kid, born near Chapel Ash and raised in Stowheath Lane (near the speedway stadium),” he said. “It was a dream come true when I signed for them.

“That was thanks to my father. He worked for Carols, the Mercedes dealer in Wolverhampton.  He was on the train going down to London for the Motor Show and made his way to the buffet car. There was only one available seat and he asked the bloke behind the newspaper if he minded if he joined him. It was Bill McGarry. He spent the journey bending the manager’s ear about me.

“McGarry said that I should go down to the ground and ask for Joe Gardiner. I was a centre-forward before I joined Wolves, scoring a lot of goals. But they must have seen something and gave me my first game in the Midland Combination at right-back.

“I loved it and took to it like a duck to water. I played as an amateur and later as a part-time professional.  While I was there, I was doing a business studies course at Wulfrun College.  I took my first job at a local steel stockholders in Wolverhampton as a trainee in sales.

“We trained on Tuesday and Thursday evenings with Brian Owen and Brian Garvey. Joe Gardiner would dish out the expenses!

“I went on to play about a dozen games in the Central League, otherwise I played in the Midland Intermediate League and the Midland Combination sides. The latter was tough – there were hard guys in the other clubs who wanted to take a piece out of the Wolves youngsters.”

“The second leg of the final was 24 hours before the game that saw Wolves relegated and Liverpool crowned as champions. After that, McGarry was sacked and I was told I wasn’t being retained. But I did stay on for almost a full season.

“Then I went to Walsall for six months and had a trial for Shrewsbury in a game at Kidderminster but I decided to go non-League, hoping that I’d get back into the League.  I even wrote to McGarry when he took over at Newcastle but nothing came of it. In truth, I became a bit disillusioned.

“I played for Stourbridge in the Southern League Premier Division and for Bilston, Bridgnorth and Willenhall. That was in the season they got to the FA Vase final but I had left after a disagreement with Barry Stobart. 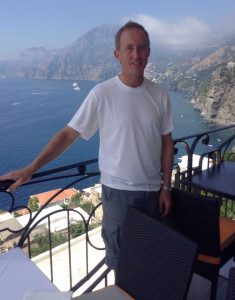 Mark in recent times. Editor’s note: This photo was not taken in Wolverhampton!

“Later, I played Sunday football as captain of Olympic Star, who used Stourbridge’s ground. I lived in Stourbridge. We had that amazing run in the FA Sunday Cup in 1997-1998– all our games were away, just like they had been with the Wolves youth team.

“We played all over the country and the final was at Peterborough against St Joseph’s of Luton, who had Kerry Dixon in their team. We drew 1–1 but won 5–3 on penalties. Graham Kelly presented the trophy and in October, 1998, we were invited to Old Trafford to make the draw for the early rounds of the FA Trophy, FA Vase and FA Sunday Cup and were presented with a memento by Sir Alex Ferguson.”

Mark is an account manager these days at Bullivant Media, publishers of a number of newspapers in the Midlands.