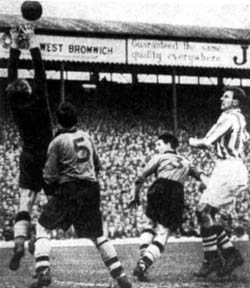 Bert Williams gathers safely in the title showdown at The Hawthorns in 1954, watched by Bill Shorthouse, no 3 Roy Pritchard and makeshift Albion forward Ray Barlow.

Even those of us whose eyes are elsewhere during this exciting run-in are interested in, gripped maybe, by Liverpool’s forthcoming home games against Manchester City and Chelsea.

But imagine how robbed we would feel, even as a TV audience, if we learned that the first of those Anfield blockbusters a week on Sunday was to be stripped of Steve Gerrard and Daniel Sturridge on one side and Joe Hart and Vincent Kompany on the other because of international calls.

It has been said before but it’s worth saying again that arguably the biggest match the Black Country has ever staged was contested 60 years ago today in just such circumstances.

The two arch rivals filled the top two places at the very summit of the English game as they squared up to each other at The Hawthorns on Saturday, April 3, 1954.

Yet the sky-high stakes, with only six League matches left to play, were no insurance against the English selectors sending for Billy Wright, Jimmy Mullen, Ronnie Allen and Johnny Nicholls to play instead that day in a Home Championship game against Scotland at Hampden Park.

That Albion and Wolves each lost two players at least saw to it that neither was obviously weakened more than the other but how unsatisfactory it now seems that a game for which almost 50,000 were shoehorned into The Hawthorns was deprived of so many of its star turns.

With the shift of power ensuring that club fixtures are seen as more important than virtually all international games in the money-driven 21st century, today’s younger fans just wouldn’t believe it could have happened as it did.

Wolves, of course, were well used to having to cope without their blond skipper and Bill Shorthouse moved across from left-back to the no 5 role on this occasion, with Roy Pritchard recalled at left-back.

To cover the loss of Mullen, Leslie Smith was drafted in on the right wing for his fourth and final outing of the season, the upheaval being underlined by the fact that Johnny Hancocks had to switch to his unfavoured left – a role in which sightings of him were extremely rare.

Albion, who led the table by two points at that stage despite a damaging defeat at Sunderland three days earlier, were not as used to international calls and responded to the absence of their talisman and centre-forward Allen by pushing Ray Barlow up front from his normal wing-half role.

In place of the Wolverhampton-born Nicholls at inside-left was the little seen Wilf Carter, the Baggies also suffering an injury pile-up that meant Paddy Ryan was the only one of their regular forwards on view.

The changes were significant, one of them more so when Smith took the 58th minute corner from which the outstanding Peter Broadbent to head on for Roy Swinbourne to turn and half-volley the game’s only goal past Jim Sanders – lining up in the home goal because Norman Heath had broken his neck at Roker Park in midweek and wouldn’t play again.

Despite having Barlow added to their list of limping stars following a collison with Shorthouse, Albion still had the scent of the first breakthrough when Bert Williams easily collected a shot by Ryan.

But Wolves were the stronger side and might well have added to their lead had it not been for misses by Swinbourne, Hancocks and Dennis Wilshaw twice.

The win completed a crucial double of home-and-away 1-0 victories for Stan Cullis’s side over their nearest neighbours and meant the title race was neck and neck with five games left for each club.

“Wolves did their homework and, over the 90 minutes, were the better organised side,” Barlow admitted. “But injuries did not help us one little bit.” 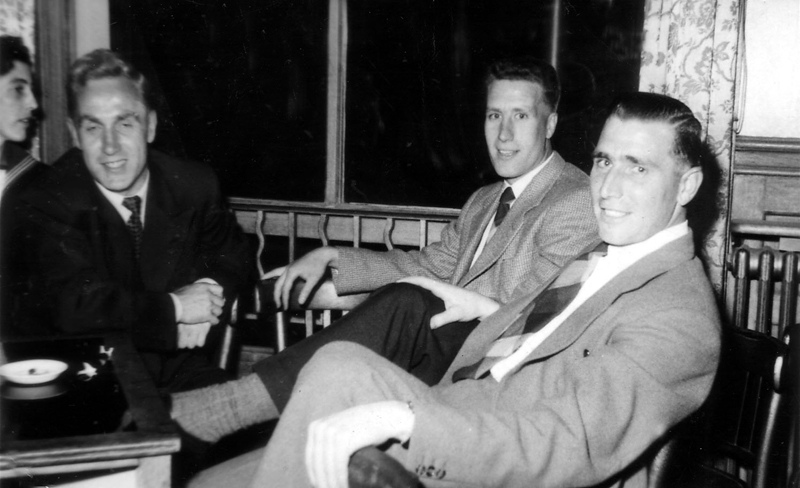 Commentator (Phil Morgan) referred in his Express & Star match report to the excellence of Broadbent – himself an England player later in the decade – and that of wing-halves Bill Slater and Ron Flowers for Wolves and Jimmy Dudley and Joe Kennedy for Albion.

The result was certainly a turning point in the campaign. Wolves, having lost 4-2 at home to Middlesbrough the previous Saturday, confirmed their return to form by thrashing Charlton 5-0 the following weekend.

Albion lost at Cardiff at the same time and were unable to regain their impetus as they won only one of the four games that remained after that. Wolves could even afford a slip at Huddersfield in their final away match as they were crowned champions by four points – the equivalent in those days of two wins.