Youth Having Its Fling – Then And Now

We are never short of material for this feature……and it isn’t only visits to Wolves matches that provide us with our titbits. As well as going to Crawley on the League One promotion trail, our recent travels have taken us to Bolton and Leeds. 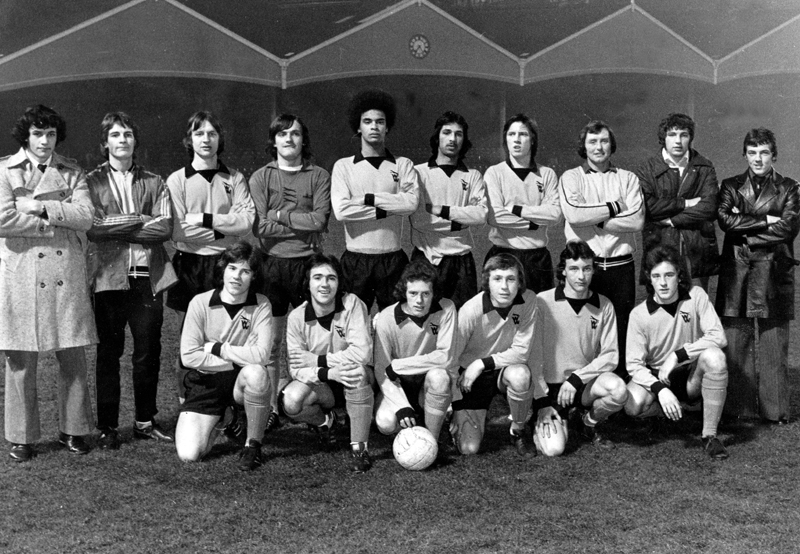 Friday, February 28: Came by a little-seen photograph while planning our use of an in-depth article by Charles Bamforth on the Wolves team who surpassed expectations by reaching the final of the 1975-76 FA Youth Cup. Unfortunately, it did not show Bob Hazell, who was a regular in the side on the run, including the two-legged final against Albion, but there are plenty of names to conjure with…..

Monday, March 3: Heard an interesting follow-up to the story we posted about Steve Mardenborough’s son Jann at the start of November. We wrote of the family’s increasing involvement in the motor racing world and are now told that the 22-year-old has been signed by Red Bull to an ‘intensive driver development programme.’ His links with the team are mainly involving simulator work as his background is in the virtual world, rather than the traditional karting route. Jann is a top performer in PlayStation racing games.

Saturday, March 8: Read of a surprising stat put out by Watford fans on a website. They claimed that of all the past and present managers at Vicarage Road, only two men had lost fewer than a quarter of the League matches played during their periods in charge there. You would think Graham Taylor would have to be one – but apparently not. Instead, the honour rests with two other men with strong Wolves connections, Bill McGarry and Kenny Jackett, no less!

Tuesday, March 18: Bumped into Guy Whittingham – twice a Molineux loanee in the 1990s – after Wolves’ game at Crawley tonight. He is now part of John Gregory’s backroom team there after his many years’ service to Portsmouth and eloquently carried out the after-match media commitments on the manager’s behalf. It is 20 years this month since Whittingham made his first Wanderers debut in a stay that included a 3-0 defeat at Pompey in Graham Turner’s final match in charge. Continuing the Fratton Park theme, Paul Walsh was in the press room on Sky Sports duty and spoke fondly of his former strike partner.

Tuesday, March 25: Had a bizarre and chance late-night meeting on an M6 service station with Steve Claridge. I was en route home from interviewing former Wolves midfielder Paul Walker and the Bolton legend Syd Farrimond – the latter at the Championship game against Blackpool at the Reebok Stadium – when our eyes met just outside Costa Coffee at Sandbach. Claridge had been as a fan to watch Portsmouth’s resounding defeat at Rochdale and was not overly optimistic about their chances of surviving in League Two.

Saturday, March 29: Very rarely does a football-orientated trip out come and go with NO Wolves links at all. Just as I was wondering where the connection might come from at today’s Premier League survival scrap between Albion and Cardiff, on ran Sean Connelly – the full-back who arrived in these parts during the Dave Jones era more than a decade ago. Spotting a link at a journalists’ charity lunch I attended at Villa Park yesterday was even more difficult, then I remembered Sir Doug Ellis, who said a few words before the food was served, had briefly been in the corridors of power at Molineux in the early 1980s.

Thursday, April 3: How’s this for quirkiness? Wolves fanatic Robbie Kennedy Bennett is attending East Fife’s home game against Brechin on April 26 after agreeing to sponsor the match ball as part of his 60th birthday celebrations at the end of the month. Although born in Wolverhampton and resident in Codsall, he has family links to Fife through his late father and is himself becoming known there via his work as a poet. He penned a tribute last year to Cameron Buchanan, who remains by far the youngest player ever to represent Wolves in a first-team fixture and who was in a nursing home in Fife in his twilight years. The touching words appeared in ‘A Scots Laddie Called Cameron Buchanan’, which was made Poem of the Week by Football Poets. Happily, it was also spotted by the player’s son Duncan, who took the trouble to subsequently contact and thank Robbie. The tribute is at http://www.rkbpoetry.co.uk/page39.htm (click on footie poems down the left side) and we can neatly round off this story by revealing that Robbie agreed to help out East Fife after dropping in there on a coastal walk in 2007 and 2008 and being bowled over by the friendliness of the welcome. 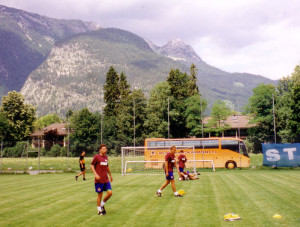 The young Fergie on tour with Wolves.

Saturday, April 5: Hoped to clear up an 18-year mystery today……..did Felix Magath take a Wolves training session on the club’s pre-season tour of Austria and Germany in 1996? I have clear memories of one of Mark McGhee’s German friends stepping in for one baking hot afternoon and hoped Andy Thompson – on radio summarising duty at the home win over Peterborough today – would be able to confirm it was the man currently trying to save Fulham’s Premier League lives. Alas, not. Darren Ferguson might have known as he was also on the trip but no more than a quick hello was possible or appropriate after he had done his down-beat post-match media interviews near the Molineux tunnel.