Up Again – With Loads In Hand

Happy To Leave ‘Squeaky Bum Time’ To Others 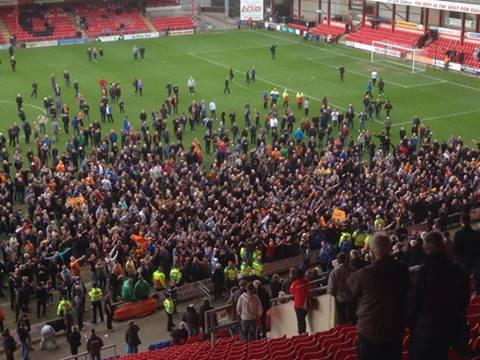 A pitch invasion of the acceptable, friendly kind as Wolves fans celebrate the final whistle at the Alexandra Stadium this afternoon.

Wolves don’t bother with heart-stopping last-day promotion triumphs, do they?

The famous ‘squeaky bum’ turn of phrase coined by Sir Alex Ferguson would never have entered the British football vocabulary had it been dependent on final-day dramas involving the men from Molineux.

The club’s eighth post-war promotion equals their most emphatic yet, at least in terms of getting the job done with so much of the regular season – all of four games – still to be played.

Three matches remained, one of them the costly defeat at Coventry, when Ronnie Allen’s side made sure of returning to the top flight 47 years ago this month by beating Bury at home. And the margin for error was the same in 1977 after a point from a goalless draw at Plymouth helped Sammy Chung’s team over the line and to the same prize.

It felt a shade tighter in 1982-83 as Graham Hawkins’ fading squad popped the champagne corks after drawing 3-3 at Charlton while having fixtures against QPR and Newcastle still to come but the successive accents from the Fourth and Third Divisions at the end of that decade were largely anxiety-free, sealed as they were with three and four games respectively still to go.

Fast-forwarding two decades, it took Sylvan Ebanks-Blake’s second-half goal to see off QPR at the height of the Mick McCarthy era but even then there was the safety net of a subsequent trip to Barnsley and a home meeting with Doncaster.

On five of those six occasions, the winning of the title followed hard on the heels of the joy of promotion, with only the 1982-83 Second Division campaign ending in the relative anti-climax of runners-up spot behind QPR.

It will be a massive surprise after Brentford’s defeat at Swindon today if Wolves don’t finish top of the pile this time as well, although the Good Friday home clash with Rotherham and the Easter Monday trip to third-placed Leyton Orient underline their run-in as far from straightforward.

What is very much ‘on’, though, is the prospect of Kenny Jackett’s 2013-14 vintage ending with 100 points or more. Seven from the final 12 on offer – well within the sort of ratio they have managed over the last eight months – would see the club to that momentous landmark for the first time in their history.

By winning at Crewe this afternoon, they have already surpassed their previous highest points tally – the 92 they amassed in their 1988-89 Third Division season – and will make it as far as 104 if they should produce a 100 per cent record over the final stretch.

Despite the long wait to go up in the Sir Jack Hayward era, Wolves have now won promotion at the first attempt four times in the last eight – and at the second attempt twice.

But a word of warning might be opportune. Across the Midlands, Leicester followed up the clinching of their own very early promotion by crashing 4-1 at home to Brighton in their next game last week and Wolves’ own results at the end of promotion-winning campaigns in the past suggest it isn’t easy to keep the foot hard to the floor when the main goal has been achieved.

But this is no time for over-doing the sobering messages and Wolves Heroes add their own congratulations to all those already aimed at Jackett and his deserving players – as well as a board who came in for much criticism amid the consecutive relegations.

We have been enjoying reading and hearing the comments of delighted supporters this afternoon and evening and particularly relished the one posted by Roger Pitt on Facebook. 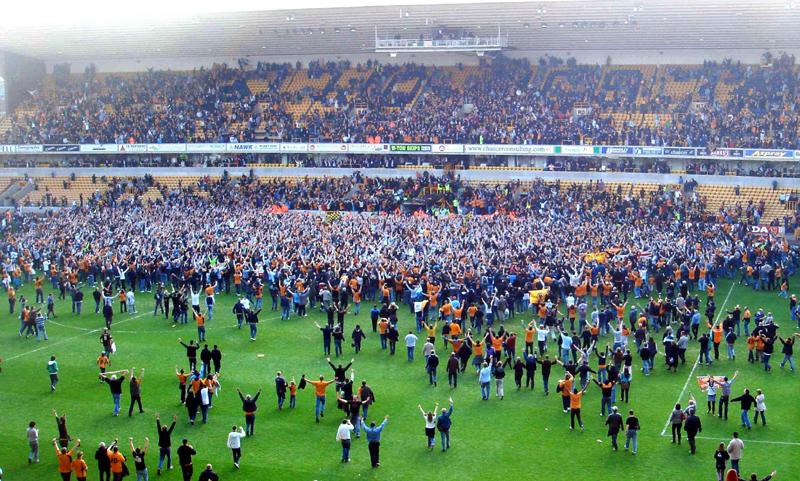 A flashback to how reaching the Premier League five years ago was savoured at Molineux.

“Since my Dad took me to watch the Wolves in the mid-1950s, they have remained my constant companion,” he wrote. “We have been through so much together and the love affair is as strong today as it was then. There have been tears of despair and tears of joy. I have survived nine relegations and today I will enjoy our eighth promotion. Thank you…..I wouldn’t change a minute of this gold and black life.”

Not that tension ‘to the wire’ is completely unheard of in promotion-winning campaigns at Molineux. The 2002-03 season went to a Championship play-off at the Millennium Stadium before Wolves made sure they would be climbing a division.