Back At The Field Of Dreams

Bobby Gets A Job Where It All Began 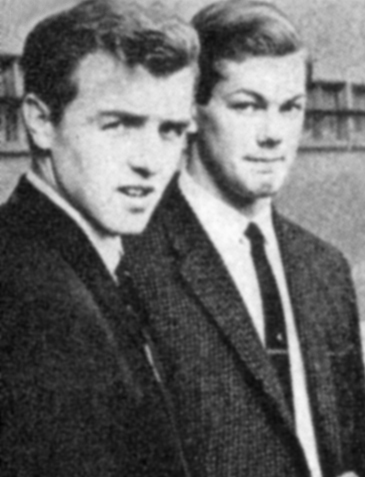 A young Bobby Saxton (left), with Peter Daniel (not the Wolves version!), in their Derby days.

Bobby Saxton was content enough with the less-than-taxing role in the dug-out he was handed at the game that brought the curtain down on this triumphant Molineux season.

He would have been happier still had he been thrown the task of showing what he could do on the other side of that white line five and a half decades ago.

The 70-year-old is – or rather, was – one of those have-boots-will-travel dependables who occupied upwards of a dozen full-time posts as a player, coach or manager.

But what isn’t as well known as the ports of call on his long CV is the fact that he was courted over some length of time as a teenager by Wolves at the tail end of their glory years.

Saxton, who managed the Sunderland side beaten in highly entertaining circumstances in Jody Craddock’s testimonial game a week ago, is from Ron Flowers/Roy Swinbourne country in South Yorkshire, which partly explains why he was in with a chance of becoming part of the Cullis system.

“I grew up in the middle of the Barnsley-Rotherham-Doncaster area and played for Tomhill Youth Club, near Conisbrough,” he said.

“I was obviously spotted playing for Tomhill and was called into the famous Wolves nursery up there. I know it’s best known as Wath but I look on it as Wolverhampton Wanderers Juniors because that’s the name of the side I represented for a long while.

“A letter used to come asking me to report for a Northern Intermediate League game the following Saturday against one of the teams we played in the north – Sunderland, one of the Sheffield clubs, Newcastle or whoever. And the games always kicked off at 11am, so you had a chance to go on to watch if there was a first-team game at the main stadium in the afternoon.

“I was thrilled when I was actually invited down to Wolves for a trial. I can’t remember whether it was Mark Crook who asked me to go but, as a lad from a mining village, I was totally star-struck when I went to Molineux and thought of players like Ron Flowers, Bert Williams and Billy Wright.

“I wish I could remember when exactly it was but it would be in the first couple of years after I left school in 1958, probably nearer to 1960. I know it’s progress when clubs move grounds or redevelop them but what a special place that was for a young lad!

“I recall going to watch a first-team night game there with the floodlights on and it left a big impression on me. And I still remember that magnificent bank with all those thousands of fans on it.

“Wolves were a huge club at that time. They were right up there in the leading group of clubs in the country.”

Saxton, whose youthful yearnings tended to be in the direction of Doncaster as that’s where it was easiest to catch a bus to from home, was desperate to make a big impact in the West Midlands on top of the two-nights-a-week sessions he had had under the gold and black umbrella in Yorkshire.

Events were set to take a wrong turn, though, in the shape of a development from which he couldn’t straighten his career out; at least not the Wolves segment of it.

“I played in a couple of trial games there and, in one of them, became a bit too protective of one of my team-mates. I wish I could remember the names of the people but this one lad didn’t have much about him physique-wise and I felt our opponents were singling him out and intimidating him.

“Of course I weighed in by taking some revenge and was sent off. It was a bit silly, one of those daft things you do as a lad, and Mark Crook said I hadn’t done myself any favours. 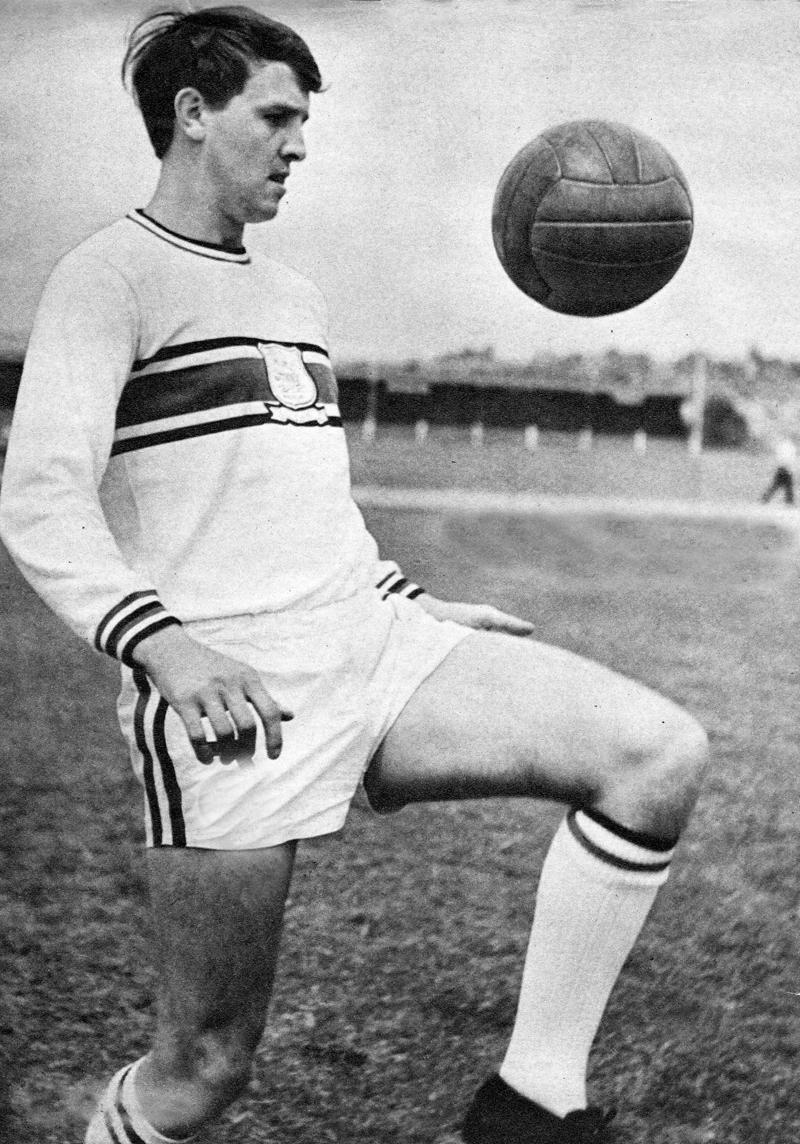 Bobby as a Plymouth player.

“I don’t know whether it’s why I wasn’t taken on but I’m sure it didn’t help me. Fortunately, after I had returned to Yorkshire and was wondering whether I would hear again from the people actually at Wolves, I had a knock on our door.

“It was a chap from Derby, saying they wanted a look at me there. I obviously did all right because they signed me and I spent more than six years there, some of them under Brian Clough.

“I played as a left-half in the old WM formation, a no 6, and, when back fours came into fashion, played alongside the centre-half. Roy McFarland and Dave Mackay were among those I played with later on.

“Cloughie nailed it in one when assessing me. He came marching on to the training pitch once and I was so in awe of him that I avoided making eye contact. He said: ‘Robert, do you know what you are?’

“We have craftsmen in this team who are very good with the ball. You happen to be a labourer – you are very good at winning it. So I want you to win it and then give it to one of the guys who is better equipped at passing it than you are. I don’t want you trying to do what you can’t do.

“It was like Upstairs Downstairs, with the different groups in the team, but I had a good time at Derby. I was there until 1968 and played over 100 matches for them. I’m proud to have had a part to play in getting them heading towards the First Division.

“I remember playing at Molineux before Cloughie arrived from Hartlepool. It was a Christmas fixture and I was having a hard time against one of their midfielders. I do wish I could remember the names but I recall being winded for the only time in my life.

“Another clear memory of the day is the brilliance of Dave Wagstaffe. A lot of wingers looped their centres in but he drove them across and meant the forwards often just needed to get a touch to produce a really dangerous attempt at your goal.

“Hugh McIlmoyle troubled us that day and I recall misjudging one cross and him powering in behind me. There was that horrible rustling sound, as far as defenders are concerned, as his header hit the net. We were well beaten if I remember right.”

Having had Alan Hinton as a team-mate at the Baseball Ground, Saxton would befriend another man with Wolves connections, Dave Burnside, at his next club. But while the former Molineux and Albion inside-forward regretted the time he spent at faraway Plymouth, the feelings were different for his colleague.

Apart from when he failed to hit it off with Billy Bingham, life in the south west suited him nicely, so much so that his stay of 231 League outings while at Home Park was followed by the short move to Exeter, where the extension of his playing career was followed by the step up into management.

Saxton was actually in charge of the Grecians when they faced Wolves – and almost beat them – in a 1977-78 FA Cup tie. Only Steve Daley’s late goal salvaged a third-round replay at the other St James’s Park and Sammy Chung’s men despatched the underdogs comfortably enough in the replay.

In the same season that Wolves had won the Second Division, 1976-77, Exeter were promoted from the basement division, runners-up spot behind Ron Atkinson’s Cambridge enhancing Saxton’s reputation. And he moved onwards and upwards to Plymouth (1979-1981) and Blackburn (1981-1986) before his final stint in the top job at York (1987-1988).

And behind the manager’s desk……

A multitude of stints in the backroom have materialised as well – and with some big hitters. He worked with Jim Smith at Newcastle, Sam Allardyce at Blackpool, Bolton and Newcastle, and Peter Reid at Manchester City and Sunderland. The latter reunion on Wearside coincided with two seventh-place finishes in the Premier League.

Retirement effectively came for Saxton in 2002 when he left the Stadium of Light, subsequent assignments having been scouting ones – an area of the game in which he is still happy to help friends out as a one-off from home near Chester-le-Street.

And, as a result of a visit made by Jody Craddock to the north east, he was happy to step in at Molineux last Monday, with Reid absent because of media duties. After all, he still has a root or two in the West Midlands.

“Wolves are still a bit special to me,” he added. “When, as a lad, you get a letter asking you to go for a trial, how good is that?”