Time For An End-Of-Season Renewal Of Acquaintances 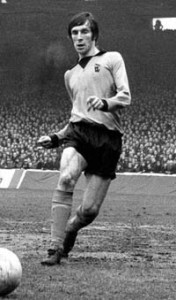 Gerry Taylor and a packed audience.

Wednesday, May 7: Paid a first ever visit to the home of Gerry Taylor at Perton. Had a chat with him about the various forthcoming golf days and also got him to add his signature to a couple of books. There was one other matter on my mind – could he remember or not whether he had played in Wolves’ UEFA Cup tie in Portugal against Academica Coimbra in 1971? He couldn’t and there’s some dispute as to whether Frank Munro, as the record books suggest, or Gerry played in the game……we’ll get it sorted out before publication of Dave Wagstaffe’s excellent biography of his old mate later this summer.

Sunday, May 11: For many years, we became used to the depressing sight of Wolves’ former players winning promotion with clubs elsewhere after failing to do so at Molineux. Maybe the tide has now turned. Eight days on from the presentation of the League One trophy to Sam Ricketts, I saw Stephen Ward and Keith Andrews left disappointed as their Brighton side were well beaten in the Championship play-off semi-final at Derby this afternoon.

Thursday, May 15: Had a second meeting in four or five days with Don Goodman, who was co-commentating at the Rotherham v Preston play-off cracker tonight. He is particularly busy at this time of year and will no doubt be on Wembley duty the weekend after next as well. The former Molineux and Albion forward, who was also at Derby on Sunday, was eulogising about Rotherham’s performance, which increases the chances of Wolves making another visit to the New York Stadium in 2014-15.

Tuesday, May 20: Spring in England isn’t quite the same this year – Alun Evans isn’t over from Australia. Not to worry, though, a phone call to the former Wolves forward’s mother in Kidderminster revealed that he is still heading for these shores with daughter Abbey. He’s just coming a bit later, some time in July. My enquiry was as a helping hand for the author of a newly-published book charting Aston Villa’s Third Division days of the early 1970s, which had the Kidderminster-born teenage sensation as a central figure.

Thursday, May 22: Was delighted to arrange a face-to-face catch-up in Lancashire with Robert Kelly, one of those footballers I feel I can justifiably call a friend. Rob, a one-time Wolves player as well as coach, directed me to a coffee shop in a village near his home and had great pleasure in telling me we were seated at the very table he was at when told he was losing his job at Preston as a result of Darren Ferguson’s arrival as manager. Blackburn legend David Dunn and his son followed us in. Within a few hours, I decided we had been in the wrong place. Only a few miles away in Clitheroe, David Moyes was reported to have got into bother with a fan.

Thursday, May 29: It’s always good to be a fly on the wall when footballers congregate en masse – and today’s charity golf day at Shifnal was no exception. Ten former Wolves players were in the field, as outlined in our post of six days ago, and it’s also an opportunity to catch up on news of others as well. Disappointing that one or two more couldn’t have made it but still a great afternoon out. 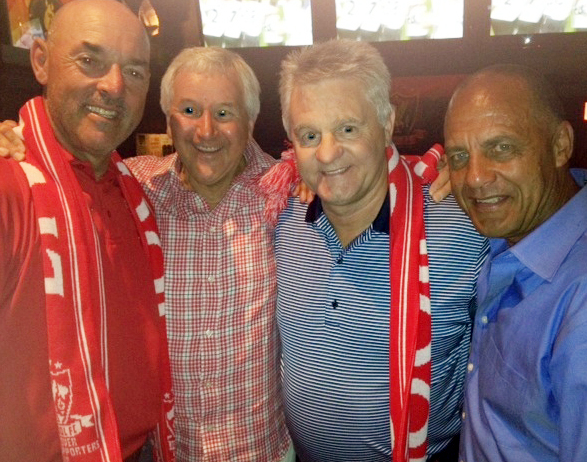 Les Wilson (one in from the left) with former Whitecaps charges Bruce Grobbelaar, Alan Errington and Carl Valentine.

Monday, June 2: Heard via email from Les Wilson that he had had a predictably highly entertaining meet-up in Vancouver with his old friend Bruce Grobbelaar. The mad-cap keeper was deputy to Phil Parkes under Wilson at the Whitecaps in 1979 before starting to make the jersey his own the following year and returned to the city to address more than 300 Liverpool supporters at a packed down-town venue. He invited Wilson to his hotel room and then on to the top table at the event, which was followed by another speaking engagement in New York a couple of days later.

Wednesday, June 4: Bumped into Rachael Heyhoe Flint in Sainsbury’s on the day I learned that the World Cup countdown is to continue on Monday, as far as viewers fom this area are concerned, with an interview with Steve Bull on BBC Midlands Today. No doubt Italia 90 and all that will have been well to the fore in Ian Winter’s line of questioning. Must remember to catch it one way or another……