Backpass And Its Brilliant Brazilian Blend!

A Scene Setter Par Excellence From The Masters Of Retro 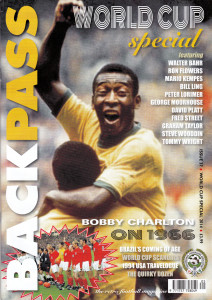 The one to look out for at WH Smith’s and other similar retail outlets.

What better way to properly kick off our World Cup-themed few weeks here on Wolves Heroes than by giving another plug to a publication that has previewed the tournament with all its customary expertise?

For a brilliant job in placing Brazil 2014 in the context of past stagings of football’s greatest event, we have no hesitation in directing you to the latest issue of Backpass retro magazine.

Their iconic front-page picture of Pele celebrating a goal, with a smaller one underneath of England’s red-shirted players lining up before the 1966 final against West Germany, sets the tone for 64 pages of nostalgia and appetite-whetting.

Most of the magazine is dedicated to World Cup matters; mainly what happened in tournaments past but, in keeping with a change of direction in recent months, there’s also a look at some of the fancied teams for the coming weeks.

Wolves fans’ eyes may well be drawn to David Instone’s two-page feature on Ron Flowers that focuses on his role in the 1962 tournament in Chile at what was arguably the peak of his international career.

The blond wing-half was his country’s top scorer in this, the last hosting of the finals in South America, and there’s a reminder within the 1,800-plus words of his mastery of an important art in which England have crucially failed in recent decades.

Flowers also shoots down the argument that England travelled across the world 52 years ago in hope rather than in expectation – perhaps a hint of the confidence that was to bring glorious results four summers later on home soil.

Alongside the main piece about Flowers and the 1962 finals is a curious article that reveals the offer of an unusual gift offered to all of England’s players by their hosts. It is a matter we put to Ron, who was Wolves’ only representative in the party, and which rang no more than a distant bell with him. But it’s a tale that emanated from the keepsakes of another former Midlands star and it’s well worth the read.

Graham Taylor gives his highs and lows from past World Cups, including the one he failed to take England to in 1994, and concludes with a brief mention of who he thinks might prevail. David Pleat, another regular Backpass columnist, gives his own low-down elsewhere.

David Platt, who was brought to the West Midlands by Taylor while the latter was Aston Villa boss, is the interviewee in a two-page article written by former Express & Star Wolves correspondent David Harrison about Italia 90 while another Midlands-based journalist, Phil Shaw,  offers his personal memories of his time at the 1994 event in the United States, where Switzerland’s manager was none other than Roy Hodgson.

Of course, no look back at the last time the finals were in Brazil would be complete without mention of the embarrassment caused to Bert Williams, Billy Wright and others. And, from the unforgettable year of 1966, when Flowers was again in the squad, there’s the bonus of a personal insight from Wolves fan Ros Pedley, who attended some of the group games at Villa Park and a certain low-cost home victory over West Germany. 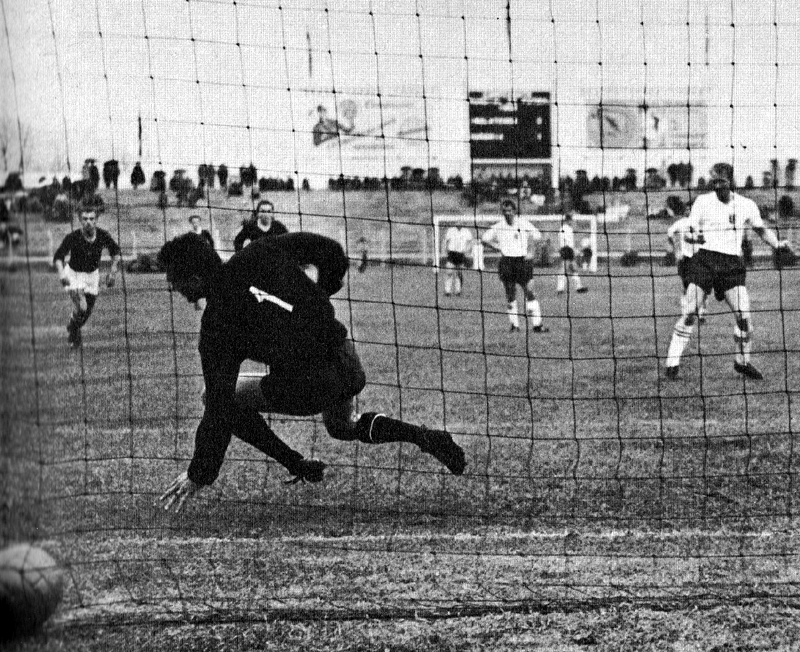 Ron Flowers safely converts from the spot during the 1962 World Cup finals in Chile.

Away from the World Cup theme, there is an obituary on Harry Bell, the uncle of former Wolves striker Norman Bell and a long-time Middlesbrough wing-half.

As we did not specifically spotlight the still-available issue 36, we can point out that it contained a two-page feature on Wolves fitness coach Tony Daley, a fascinating glimpse into some of Bert Williams’s personal documents and an obituary of Wolverhampton-born former Walsall, Brighton and Barrow man Eddie Holding.

Details of how to order Backpass, current issues or old ones, are available by clicking on the icon on the right-hand side of this page.