A Steamy Night Ahead – Trust Me!

A Taste Of The Tropics To Take The Breath Away

David Instone follows in the footsteps of England’s World Cup men by finding a bit of Manaus much closer to home than he expected…. 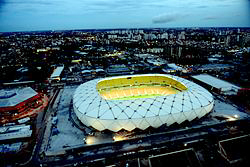 It looks some stadium – but Manaus is still sub-tropical and very steamy.

Improbable as it is that this vow will last beyond Wayne Rooney’s first misplaced pass or the next time Glen Johnson is caught out of position, I have nevertheless decided to go a little easier in my rants at the TV screen tonight.

It’s not that I am any less passionate about wanting to see England do well, nor that any Italian/Costa Rican/Uruguayan ancestry has just been discovered among the roots of the family tree.

But a brief taste of jungle law – or jungle humidity, to be more precise – has persuaded me I should be a bit more forgiving during our opening World Cup game.

Manaus came to a quiet corner of the Midlands this week with the opportunity to step into the same humidity chamber that Steve Gerrard and friends used for acclimatisation purposes before their departure to Miami a fortnight ago.

We have all read a thousand reasons why the 2022 World Cup should not be going to Qatar. The more relevant challenge confronting our players, though, is dealing with the climatic conditions being thrown at them in a few hours’ time by an Amazonian rainforest.

Humidity approaching 80 per cent is not something our lads generally encounter at St Mary’s or St James’. By way of preparation, therefore, they were pushed hard in the state-of-the-art Perform gym at the National Football Centre and so, to my surprise and considerable discomfort, were we.

In groups of five, media personel left behind when the planes took off for Brazil were ushered into the chamber and seated on the bikes Roy Hodgson’s men had probably pedalled a lot more furiously.

Mind you, I could well have done without being seated near Lee Carsley, who was doing a sweat-stained piece to the Sky Sports cameras, and BBC Midlands Today’s Daniel Pallett, a keen amateur cyclist and one currently in training for the sort of endurance event I have long since finished thinking about.

“Twenty minutes, lads – give it plenty,” urged Ian Aylward, the strength and conditioning coach for Perform as we set off at a foolishly hot pace. “You’re the lucky ones because you’re in here first. It gets hotter.”

Choosing to settle on a steady tempo that would earn no yellow jerseys, I kept the water bottle and towel close at hand as the urging/mocking faces of those waiting their turn to step into the saddle started to disappear behind the steam on the window.

It was tough. The blood thickens, sweating becomes more difficult and the body is working overtime to cope. And this is all without having to try to pick out a match-winning pass, prise the ball from opponents who generally keep it better than we do or, before we forget, keep going for another 70 minutes.

Time was up, not a moment too soon, and the conversation was about needing three showers to lower the body temperature to anything like normal levels.

The torture chamber – sorry, humidity chamber – vacated, we receive our congratulations and reassurance that our heart rate was pretty good. No wonder Aylward thinks drink pauses will be more prevalent at this World Cup, if not the precisely designated ones I was surprised to witness in the middle of both halves when I took in two matches at the start of the 2013-14 Dutch Eredivisie season.

There’s little doubt England have prepared well for these championships. An electrical storm in Miami last weekend was evidence of their location in the sub-tropics and, before leaving home, they popped over to Portugal for some conditioning and further advice on the perils of dehydration and fatigue. 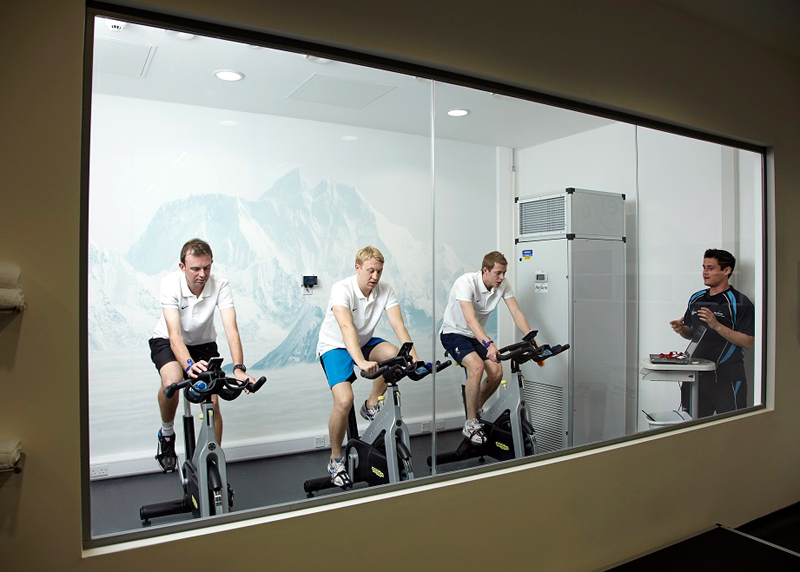 Life in the humidity chamber……as demonstrated by souls even fitter than us.

We felt pretty pleased with ourselves as well, to be honest. It was an unusual opportunity to gain an insider’s view and come out with a right sweat on.

Now…..if ‘The Ox’ doesn’t make it and Roy needs a (very) over-age replacement, who can’t pass, doesn’t shoot, heads poorly and bottles it at penalties, I might just be able to help. I’ll get on my bike just in case.

* Perform, based at the FA National Football Centre at St. George’s Park, is Spire Healthcare’s flagship human performance and sports medicine centre in the UK. They treat hundreds of professional footballers every year, largely through the PFA residential scheme, as well as welcoming members of the local public looking for recovery and rehabilitation.