How Winger Was Confronted By The Din Of Rio 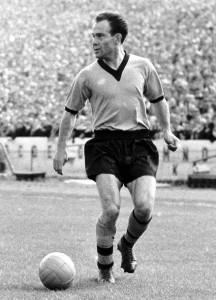 Norman Deeley in his Wolves hey-day.

If Steve Bull thought he had it hot in going on for his England debut against the Auld Enemy in the cauldron of Hampden Park, how must Norman Deeley, another famous football son of the Black Country, have felt almost exactly 30 years before?

The tiny right-winger, having made a fine job of taking over from Harry Hooper in Wolves’ all-conquering 1950s side, saw an even bigger opportunity present itself after contributing 19 goals at club level in the season the League Championship crown was successfully defended at Molineux.

At the start of a 20,000-mile end-of-season trip around the Americas, he became the latest player to be given the chance of showing he could succeed in the no 7 role occupied for many years by Stanley Matthews.

And the opposition just happened to be World Cup holders Brazil in their giant Maracana Stadium!

Deeley ‘roomed’ with Albion centre-forward Derek Kevan and still had clear memories of his blooding in Rio on May 13, 1959, when he and I met over morning coffee in the less rarefied atmosphere of Morrison’s supermarket on the site of Walsall’s old Fellows Park home around ten years ago.

“Warren Bradley of Manchester United and Bryan Douglas of Blackburn were among the other players to have been tried on the right wing and it was quite a tall order playing away to Brazil in my first England game,” he recalled.

“At least I had three of my team-mates from Wolves in the squad – Billy Wright, Ron Flowers and Peter Broadbent – as well as Derek from down the road at the Albion.

“But the experience was quite frightening. The crowd was huge and I remember the guards carrying guns to keep the fans in control.

“Brazil, with Pele, Didi and the Santoses, were the best side I ever saw and, when we met them, it was red-hot on a hard pitch and we had played something like 50 games before we arrived out there.

“But they were such a good side. Any team would have struggled to live with them and it was no disgrace for us to lose 2-0.”

Wright, who was to announce his retirement as a player a few weeks after returning home, described the Brazilians as the only side with whom he would compare the 1953 Hungarians. The Daily Sketch went even further by recording that they were ‘from another galaxy.’

In the Talking With Wolves book compiled by Steve Gordos on behalf of the Express & Star in 1998, Deeley recalled how his marker Nilton Santos, obviously knowing the 25-year-old was a nervous international rookie, had sportingly allowed him to reach the byeline and cross the first time he touched the ball – and then said: “Now you’re on your own!”

First-hand accounts confirm that England faced a task of Sugar Loaf Mountain proportions when taking on the team who had won the World Cup in Sweden the previous summer.  A recent World Cup special edition of Backpass referred to the crowd being 150,000. Norman Giller’s official 2002 biography of the Wolves and England skipper had the turn-out at a mind-blowing 185,000. The FA Yearbook pitched somewhere in between at 160,000. Anyway, what’s 10,000 or so here and there between friends? I think we can take it that the atmosphere was something else.

Right-half Ronnie Clayton, in his autobiography, spoke of a crowd ‘whistling derisively’ and throwing fireworks on the field from behind barbed-wire fences.

Not that such precautions prevented invasions. Wright was quoted as saying that keeper Eddie Hopkinson had the indignity of being confronted by radio commentators rushing on to the field for a reaction from him as he lay prostrate after being beaten for one of the goals by a stunning shot from winger Julinho, who was described by England manager Walter Winterbottom as the best winger he had ever seen.

In a side for whom makeshift left-back Jimmy Armfield was another debutant, Bobby Charlton and Johnny Haynes rattled shots against the post at the other end but the damage was done by two early goals, the other from Henrique. 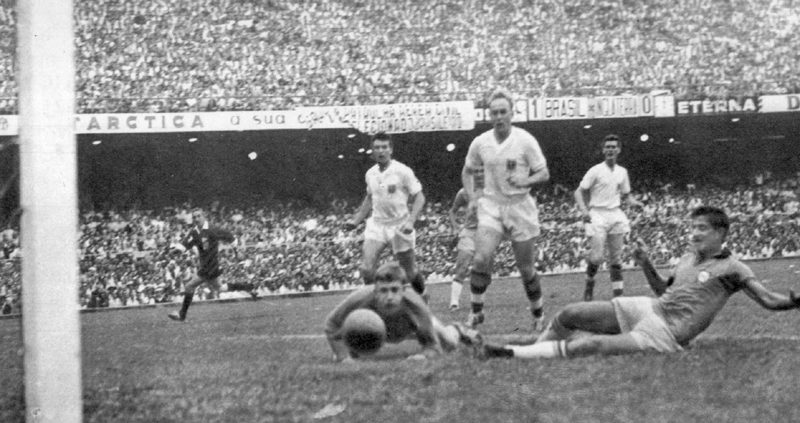 Against an unbelievable backdrop, Billy Wright watches Henrique score Brazil’s second goal at the Maracana in 1959.

Deeley went on to win a second and final cap in Lima four days later, when England – this time on Jimmy Greaves’s debut. But again it was a sobering experience as England crashed to a 4-1 defeat, followed by a 2-1 loss in Mexico and an 8-1 win over the USA at Wrigley Field, Los Angeles.

The winger, who died in 2007, may have had a short international career but it was not without its piece of history. The naming of he alongside, Wright, Flowers and Broadbent in Rio (Broadbent was omitted in Peru) was only the second time Wolves had provided four players for a senior England XI, the other occasion being against France in 1955, when Dennis Wilshaw and Bert Williams accompanied Wright and the debutant Flowers.