Qualifying For Mexico ’86 Was A First For Proud Canada 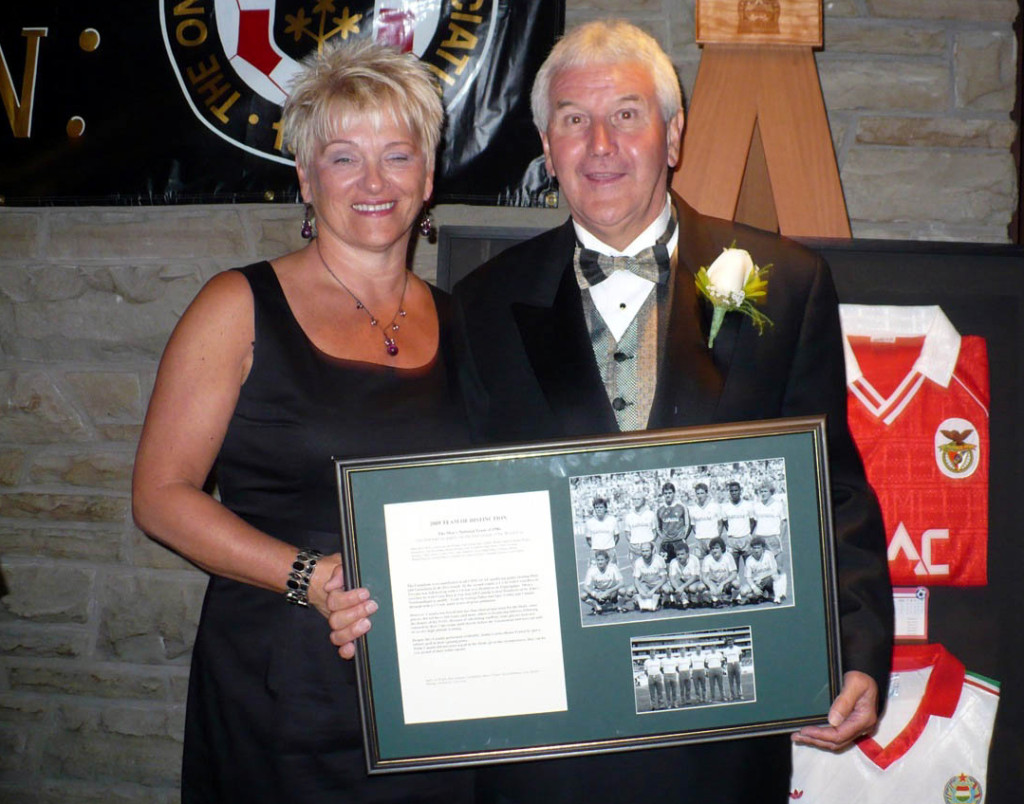 Les Wilson and his wife Lois at a Hall of Fame celebration occasion.

Les Wilson has offered us a detailed insight into some of the background work he put in during his two decades as a ground-breaking international boss.

The popular former Wolves utility man has a niche in history as the only man ever to manage Canada at a World Cup finals and is proud to have been inducted into his adopted country’s football hall of fame.

The Maple Leaf predictably came down again pretty quickly during the tournament in Mexico in 1986, with the minnows beaten by a 79th-minute Jean-Pierre Papin goal for European champions France in their opening group game in Leon, then defeated 2-0 by Hungary in Irapuato and by the same score and at the same venue by the USSR.

They weren’t helped when their coach Tony Waiters, the former Blackpool goalkeeper, had his files on their three opponents stolen on the way to Central America.

The disappearance occurred in Florida, where England prepared recently, but Wilson believes the odds were still stacked against Roy Hodgson’s players in Brazil as they are used to performing in more comfortable temperatures.

“I have some sympathy for England – and Spain and Italy for that matter – in not making it out of their groups in this World Cup,” he said. “It isn’t easy in that climate.

“We hear that it is the winter out there but it’s still hot and, in some places, humid. It’s just that they are in the rainy season, so it isn’t described as summer.

“We used to work very hard on acclimatisation to prepare for big matches or tournaments because going, say, to Central America to play, was very different to playing in Vancouver or Toronto.

“The people there didn’t enjoy the same standard of living that we had and you had to be careful about drinking the water in some places. I’m guessing we played Costa Rica ten times during my time in charge and you were never surprised if you heard that an away game against one of the teams from that part of the world was to kick off at about 1pm, right at the hottest time of the day.

“That is very much part of the challenge. Getting good results in Central American and Caribbean countries is no easy task. When I was appointed in early 1983 as manager, Tony Waiters and I realised that we had to play a lot in both Central America and the Caribbean to acclimatise to the hot sticky conditions that sap one’s strength.

“These countries nearly always played games during the day to maximise their advantage over us. One of my first tours with Canada’s Olympic and World Cup team was into Central America and it was no cakewalk. 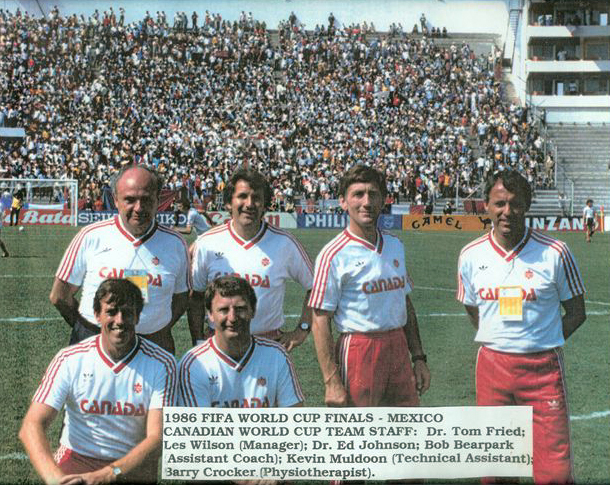 “We played friendlies against Mexico in Irapuato (lost 5-0), Honduras in San Pedro Sula (lost 3-1) and Honduras in Tegucigalpa (lost 1-0). This was December and, believe me, it was very, very hot and humid. But I’m sure it helped us qualify for Mexico.

“Tony and I realised very early on in our management that we desperately needed to experience the good, the bad and the ugly of playing in Central America and the Caribbean on a regular basis.

“In March of 1984, we travelled to Port of Prince and beat Haiti 1-0 before over 20,000. We then convinced the Canadian Government we needed to expand our experiences into the world of FIFA, this time in North Africa.

“We went to Algeria, Tunisia, Morocco, Cyprus and Egypt. It was all about playing in different conditions – ones we weren’t used to. In early March of 1985, we virtually decided to camp out and play as many friendly and ‘exhibition’ games as possible in Central America and the Caribbean. From March 8-25, we played six international games on the road, including Costa Rica twice.”

By then, Canada had made a major impact in the qualifying programme for the 1984 Olympics. They thrashed Clyde Best’s Bermuda 6-0 at home and drew 1-1 away, then took revenge over perennial CONCACAF champions Mexico by defeating them 1-0 in front of a capacity crowd in the British Columbia capital, Victoria.

“In the return fixture in the November in Toluca, which has one of the highest altitudes in North and Central America, we lost 2-1 and forced a play-off match to be played in Fort Lauderdale, Florida, on December 20. What a great Christmas present…..we defeated the powerhouse Mexico team 1-0!

“That put us through to the final stage of CONCACAF qualification for the Games. Against a very talented Costa Rican team, we produced a brilliant performance to draw 0-0 before a rabid crowd over there, where it was very oppressive. Next up, we defeated Cuba 3-0 at Royal Athletic Park in Victoria (the same stadium at which Wolves played the Victoria All Stars way back in 1963), then hosted Costa Rica in Victoria and did what we had to do by drawing 0-0.

“We thus became CONCACAF Olympic champions and qualified for the Games in the United States – the first time in the history of Canadian Soccer that had been achieved.”

Wilson and Waiters, already a big success at Vancouver Whitecaps with former Wolves left-back Bob McNab at their side, led Canada to fifth place in what were known as the Los Angeles Olympics and further acclaim came to the country – these days languishing in the international shadows – when they won the inaugural Francophone Games in 1989 and the CONCACAF Gold Cup and Federation double in 2000.

The 66-year-old one-time Wolves man was the only Canadian in Zurich at the draw for the 1986 World Cup finals and underlined his firm friendship with Bobby Robson by agreeing a friendly date with England in the build-up to the tournament in Mexico.

Wilson, a keen TV viewer of the current global spectacle, has revealed some of the lengths national organisations will go to, legal and otherwise, in search of that vital advantage. 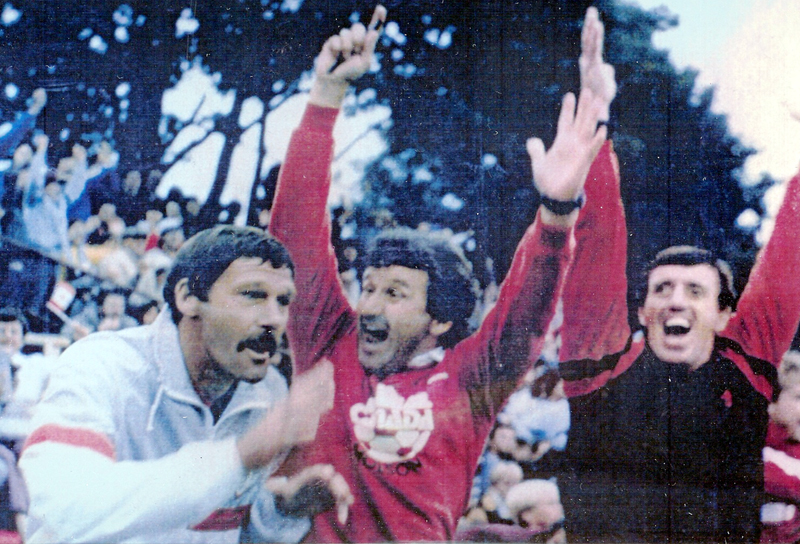 World Cup-bound for the first time…..the Canadians, with Wilson in the centre, celebrate success in Newfoundland.

“We got used to difficult kick-off times on our travels but we once countered this by playing a game against Honduras in Newfoundland, where we knew they wouldn’t be as happy. We won and became CONCACAF champions again.

“More seriously, there was an occasion abroad where we were told we couldn’t train the day before a game at the stadium where our match was being played. I argued that this was against FIFA rules.

“There was a group of armed 16-year-olds blocking our path but I told my staff and players that I was walking through them and on to the pitch. Fortunately, they all followed my lead and the incident passed without any serious problems!”