Life After Wolves Proves A Shoe-In

Charles Bamforth’s unstinting support of this website took an extra twist at the weekend when he used the start of his journey back to California to squeeze in a visit to see us a few hours before kick-off at Wolves’ feisty friendly against Celta Vigo. And we are delighted to post another of his off-beat pieces here….. 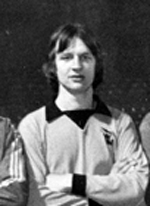 Steve Crompton pictured before one of the games in Wolves’ memorable 1975-76 FA Youth Cup run.

“If you cut me, I bleed football. I eat and breathe it.” Small wonder, then, that Steve Crompton is still actively involved in the game almost 40 years after he functioned as top gun with six goals in Wolves’ run to the 1975-76 FA Youth Cup final.

The bustling Crompton was good enough to front the line for the Wales Under-15 Schoolboy side, a team who also included Eddie Niedzwiecki, Terry Boyle and Ian Walsh.

“I started in the games against West Germany and England, who included Mark Higgins, Peter Coyne and Martin Patching,” he adds. “Burnley and Wrexham wanted me and the Wrexham manager John Neal came in person to our home. That was daunting. One of the other players at Ruthin Town had had a trial at Wolves, so they wrote to the club about me and I went to Molineux.

“Joe Gardiner, who was in charge of the youngsters, was a lovely, lovely man. He was big friends with Joe Screen’s family and I was in digs with them alongside Kevin Jones, who was from Wrexham. Kevin was released at the end of the first season.

“As an apprentice, I cleaned the boots of Phil Parkes, Maurice Daly and I think Geoff Palmer. Jack Dowen, who looked after us, was firm and strict but I got on well with him. Apart from Kevin, my pal was Garry Tysall. I had a number 46 on my training kit, so I knew how far down the pecking order I was! It was a huge squad, with the likes of Norman Bell and Mel Eves ahead of me.

“I owe so much to the coaches Brian Garvey and Brian Owen. Looking back, they were very patient men and taught me a lot. They were a big factor in us doing so well.

“In the replay against Birmingham at the start of our run to the Youth Cup final, Bill McGarry came to watch. I chased a full-back and tackled him. He must have liked that because I started the next Central League game, against Stoke.

“I think they wanted to see if I could hack it. I did all right and scored but I could have done better. I scored again against Preston and then we drew with Derby, who had Francis Lee up front. And that was it.

“With that Youth Cup side and the slightly older one that won those tournaments in Calais and Switzerland, there was talk that this was the basis of the new Wolves team. But they do say, of course, that you win nothing with youngsters.

“They would let you know two months ahead of your 18th birthday if they were going to sign you full-time or not. My birthday was in the December of my second season, so I knew early on that I wasn’t going to be taken on. To be honest, it’s likely it was the right decision. I was probably not good enough at the time.

“But adversity makes you a better person and you can either give up or try, try, try again. Kevin Jones just stopped playing and gave it up for good. But I was determined to make it.

“Derek Jefferson had gone to Hereford, who were then in the Second Division, and he recommended me to them and they took me on a two-month trial. John Sillett was the manager – and I had thought McGarry was a frightening man! He played me the once.

“Then Tony Ford came in and he played youngsters. So I got a lot of games at centre-forward. Terry Paine was there – what a player! Mike Bailey followed, with Bobby Gould as player-coach. I moved in due course to right midfield. I got injured pre-season and missed half a year. I was not fully fit when Bailey and Gould were there. I went on loan to Bath City for two months and I was about to sign when their manager resigned. 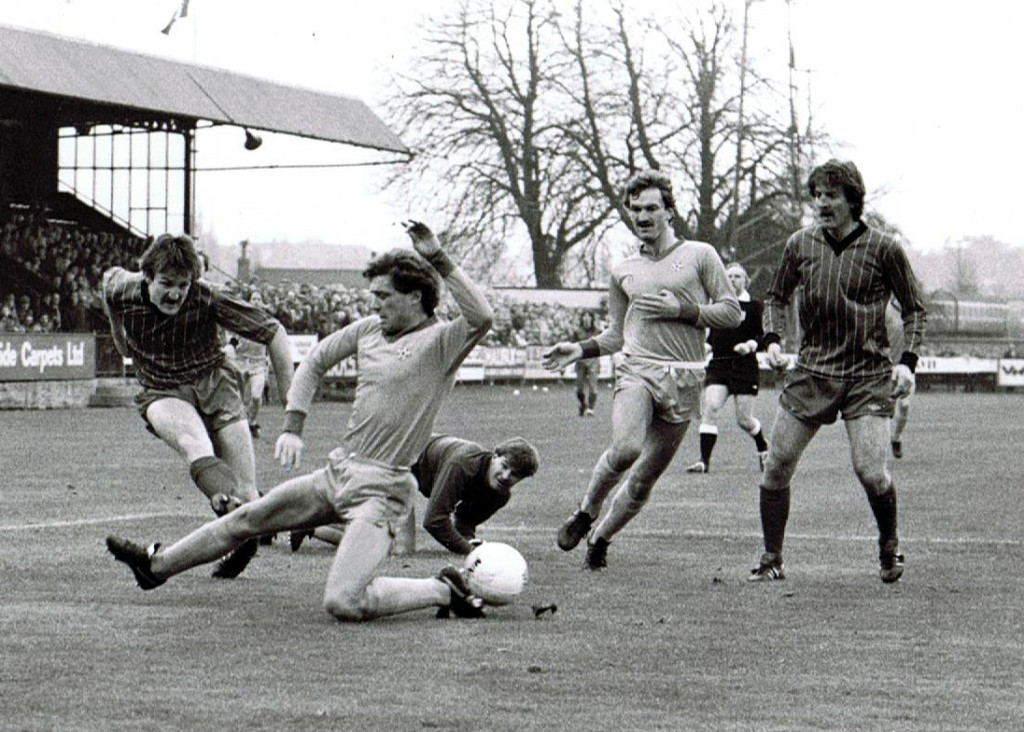 Crompton in the thick of it in an Aldershot v Worcester clash.

“I was still on a three-year contract at Hereford. Worcester City came in for me and the transfer fee was £4,500, a record for them. They had just won the Southern League. I enjoyed my time there and moved to the right wing.

“I was there for five seasons. We lived there – my wife and I married when we were 19 and are still together. It was a great family club. The players and the wives did lots together and we all got on. That was the start of the Conference.

“There were 2,500 people every week. Phil Parkes, Willie Carr, Gerry O’Hara and Paul and Craig Moss all joined. I was semi-professional and worked in the civil service, in a job centre. My mother had ensured I stayed at school long enough to get my O Levels. It was an ideal job with flexible hours plus the fact I would turn up to training and games not as tired as the lads who had manual jobs.”

“Next stop was Runcorn,” he added. “I had played well against them and John Williams wanted to sign me. It suited me. My father, a farrier, had been urging me to come back home to do an apprenticeship and I was unhappy by now in the Civil Service.

“Runcorn was convenient and of course the money at the football club supplemented the poor pay in the four-year apprenticeship. I was there for two seasons. We got to the FA Trophy final at Wembley but lost 1-0 to Altrincham, who had Jeff Wealands in goal.  Then the Alty manager John King basically swapped jobs with Williams. I didn’t really get on with King, so I got in touch with John Mahoney at Bangor and went there.”

I pointed out to Steve that he was a big favourite at Worcester and Bangor. “It was my style of play; no messing. I had no silky skills but I would run through a brick wall. I would put my head in where I never should have.”

Martin Loftus, a colleague from his days in the Wolves youth side, said the thing he remembered best about Crompton was that, as well as being a good player, he had the knack of scoring with looping headers. Such exploits were about to end, though, more than 20 years after he was blazing the trail in the number 9 shirt with Wolves. 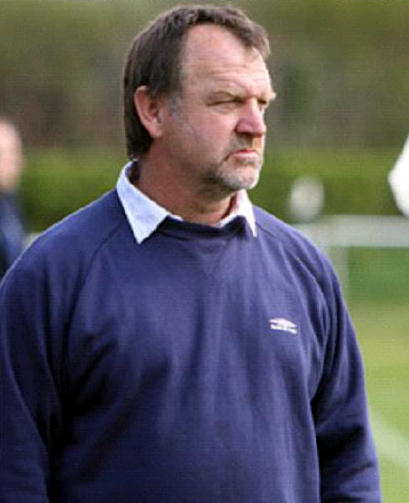 And how the main man is now…..

“By now, I had a bad knee, so I decided to leave,” he said. “I was shoeing horses for a living. When you have wrestled big animals all day, you’re pretty tired when you get to the club for training. I went back to playing for the town team before going to coach with a friend at Bala Town.

“There was a chap that wanted to make them a force and we went through the Pyramid to the Welsh Premier and eventually the club went into Europe. I was there for six years and got my UEFA B badge.

“I decided that I fancied being a manager myself and went to Ruthin Town. I probably shouldn’t have done it and, although we got to one final, it wasn’t a great year. Now I manage Corwen and the pressure is off.”