Up One! JR Climbs The Top Ten 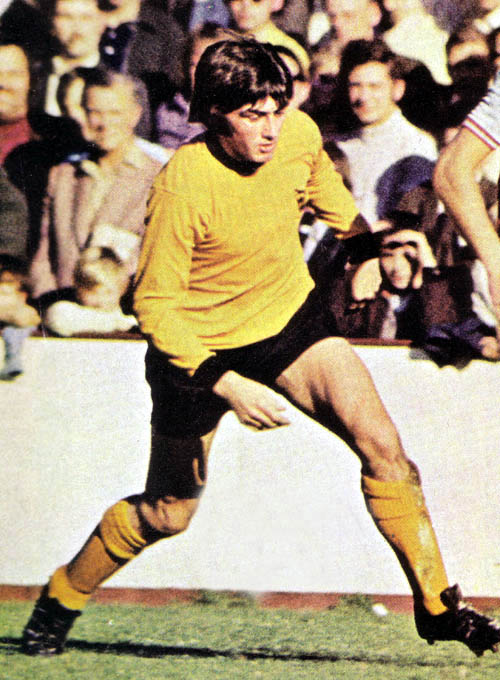 John Richards – his Wolves career was even further reaching than we thought.

More than 30 years on from the end of his phenomenal Molineux playing career, John Richards has had an extra game added to his statistics.

The figure most ingrained in the mind from the striker’s legendary service to the club is 194 – the number of first-team goals he scored.

For decades, it had been thought that the tally, which stood as a Wolves record until Steve Bull broke it in 1992, came from 486 matches.

But the eagle eye of keen statistician Steve Gordos, also the author of several quality publications on a gold and black theme, has seen to it that an extra outing can now be added to the Richards entry in the record books.

The former Express & Star sports editor was busily researching for the Frank’s For The Memory book he has edited as a tribute to Frank Munro and author Dave Wagstaffe when making the discovery – in the Molineux Hotel, appropriately enough!

“I called in at the Archive Library to check out a few anomalies in the record books and accidentally stumbled on an extra appearance for JR,” Gordos said.

“It had been stated that he went on as a substitute in just the home game against Dundee in the Texaco Cup in  1970-71 but he was used from the bench in the away game as well when he replaced Paul Walker.

“That means he played 487 games for Wolves, the significance of which is that he is ninth in the all-time appearances list, with one more match to his credit than Jimmy Mullen.”

We at Wolves Heroes, including co-owner Richards, are grateful to be informed of the discovery and are amending our records accordingly in the Legends area of this site.

Gordos has also been responsible for a tweaking of the career stats of the man whose life and times are about to be celebrated in the hard-back Thomas Publications production that comes out the week after next.

Munro had been widely said to have made 371 senior appearances for the club – then it was discovered in the spring that he and not Brian Owen had played in the Texaco Cup draw at Kilmarnock in 1972-73.

An evening-up process has recently been found to be necessary, though, because the Scot is also incorrectly stated by some to have been in the Wolves side for the away leg of the UEFA Cup tie against Academica Coimbra in the autumn of 1971. He was out injured that night and Gerry Taylor played instead.

Frank Munro – adjustments made just in time for the biography of him.

The long-acknowledged ‘Bibles’ used by Wolves fans as statistical reference therefore have Frank’s match totals for the club correct, although by default and with this double change needed in the breakdown of his games.

Our version concurs with the findings of Wolves fan Ian Shelton, who said: “Good work on finding the information on his appearance at Kilmarnock. I was researching the Texaco Cup matches recently and a Killie fan who was at that game also said Frank  played.”