Wolves And The Charity Shield

To coincide with today’s Community Shield clash at Wembley, we look back to Wolves’ five appearances in the fixture – all of them played when it was known as the Charity Shield.

The sides were strengthened by the return of Johnny Hancocks and Jimmy Dickinson respectively after they played in England’s win over Wales at Cardiff four days earlier, Pompey also finding a place for Bert Barlow, the forward transferred to them from Molineux in the months before he hurt his former team-mates by scoring against them in the 1939 FA Cup final. 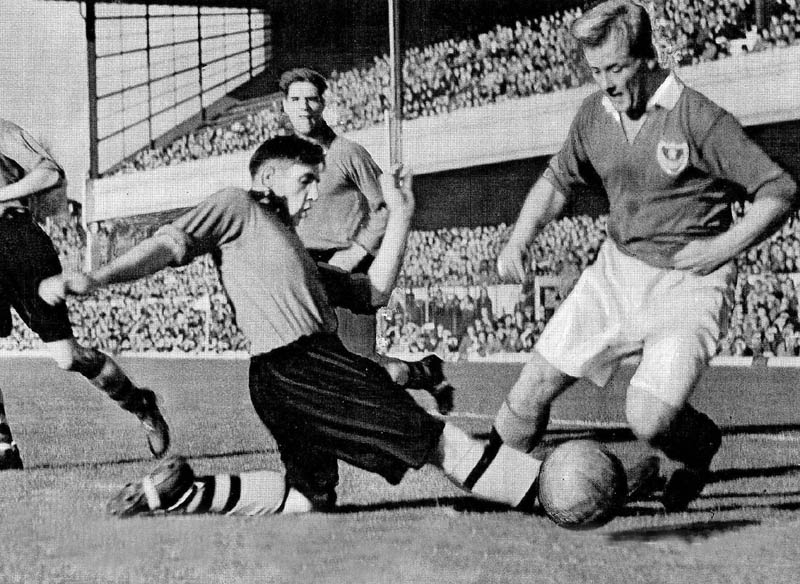 Bill Shorthouse slides in on Jack Froggatt in the 1949 Charity Shield at Highbury.

A modest crowd were present but they witnessed a good game that deserved better goals than it had.

Duggie Reid looked offside when firing Pompey into a 31st minute lead but any sense of injustice was tempered when a harsh penalty awarded for hand-ball gave Hancocks the chance to equalise with his customary power from the spot. The Shield was shared by the clubs, with space being found in the Fratton Park trophy cabinet first.

Wolves had also drawn 1-1 at Pompey at the start of October and honours were shared by the same score when they returned to Highbury to face Arsenal in the League in December.

Molineux was alive with a 45,035 attendance for its first floodlit game of the season despite the absence of Billy Wright, Bill Slater and Albion’s Ray Barlow because of England’s forthcoming game in Belfast and the loss of Eddie Stuart, Roy Pritchard, Jimmy Mullen and the Baggies’ Johnny Nicholls through injury.

Nineteen-year-old Peter Russell was given his first-team debut at centre-half and it looked like being a winning start when Roy Swinbourne fired Wolves into a 12th minute lead that Norman Deeley doubled at the start of the second half by heading in Johnny Hancocks’ free-kick.

Ronnie Allen squared matters with a quick-fire one-two, though, only for Swinbourne to restore Wolves’ lead and then set up Hancocks for the fourth. But Allen again revived Albion, who snatched a thrilling share of the spoils through he and Paddy Ryan late on.

This tremendous spectacle was the first time substitutes had been used at Molineux, with the FA Cup holders sending on Ken Hodgkisson and Jimmy Dugdale for George Lee and Jimmy Dudley in an effort to contain the League champions, who ran out 4-0 winners in the Division One clash of the clubs at the same venue three weeks later.

Even half a century and more ago, Burnden Park held some unhappy memories for Wolves, who fell short two days after swamping Manchester United 4-0 in Molineux’s first Saturday night fixture.

They were short of firepower in attack, where wingers Norman Deeley and Jimmy Mullen were ruled out by injury and Peter Broadbent by a call to international arms in Belfast. In addition, Wolves were reluctant to seek Bill Slater’s release from his teaching duties at Birmingham University.

Gerry Mannion was given his first-team debut and all the club’s South Africans – Cliff Durandt, Des Horne and Eddie Stuart – were in the line-up for the second successive Monday night, the previous one having brought a victory over the South African national team.

The game was notable for the fact Nat Lofthouse played part of it in goal for a remarkable third time against Wolves. He spent ten minutes between the posts in place of the injured Joe Dean before Eddie Hopkinson, who was sitting in the stand supposedly resting prior to an outing for the Football League representative side, was given permission to take over.

Wolves couldn’t take advantage, falling two behind to Freddie Hill and Neville Bannister just before the break and seeing Lofthouse add two more in the second half. In front of a 15,596 crowd, Durandt netted Wolves’ consolation near the end from an Eddie Clamp free-kick.

This was the first time Wolves had won the Shield outright and came on an afternoon when the fixture was played for the first time as a curtain-raiser to a season.

The FA hoped its rescheduling would increase interest, so they would have been pleased with the 32,329 crowd the back-to-back League champions attracted to Molineux – and with the subsequent windfall for charities – on the day Eddie Stuart led the team out for the first time after Billy Wright’s retirement.

Wolves had beaten Forest in their previous four games following the East Midlanders’ promotion but, with Gwyn Jones deputising for the injured Gerry Harris, Stan Cullis’s men had to do things the hard way on this occasion after Tommy Wilson had opened the scoring in the 37th minute for a side who had their £10,000 signing from Tottenham, Jim Iley, making his debut.

Jimmy Murray equalised within a minute and Peter Broadbent and Micky Lill scored in the second half, with Ron Flowers as the undisputed man of the match.

It remains the only time Wolves have had sole ownership of the Shield.

Only 19,873 turned up at the home of the club who had pipped Wolves to the League title and they saw Brian Miller fire their side into a lead that was matched by Deeley’s clever second-half finish. 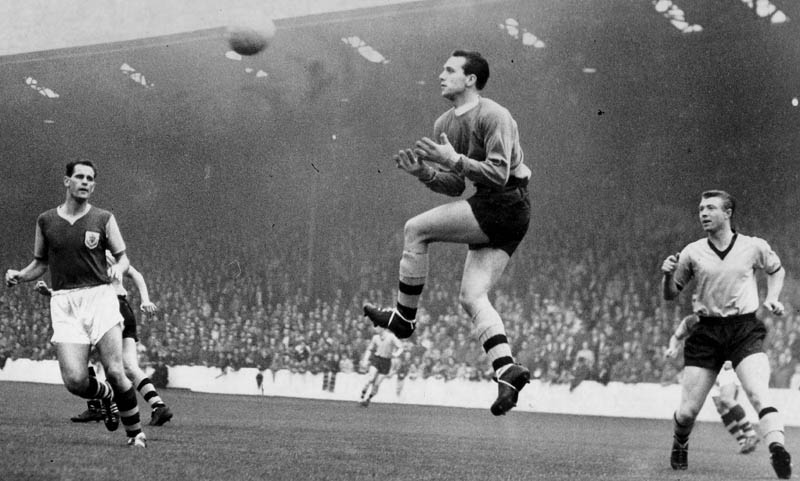 Safe catch coming up as Geoff Sidebottom leaves his line to gather at Turf Moor in 1960. George Showell looks on.

John Connelly looked to have won it when he struck four minutes from the end but there was still time for Jimmy Murray to level with a brilliant header from Gerry Mannion’s corner.

And some Charity Shield oddities…….

The match may be a sort of Super Cup now but was first played in 1908-09 as a replacement for the Sheriff of London Charity Shield and was contested on an invitation basis.

The first staging was between Manchester United and Southern League winners QPR and is the only one for which a replay has ever been played.

Not until 1921 was the Shield contested between the League champions and the FA Cup winners – Burnley and Tottenham. Wolves would have been involved had they not lost 1-0 to Spurs in the Cup Final at Stamford Bridge.

Even then, the format remained inconsistent for around another decade and there have been instances since of variations, with the World Cup-bound England team facing an FA touring party in the 1950 staging – when Pompey had again won the League.

So did Arsenal play Arsenal Reserves after the Gunners did the double in 1970-71? Definitely not. The club were away on tour, so the FA invited Second Division champions Leicester, who have never won the League or FA Cup, to play beaten Cup finalists Liverpool. Leicester won 1-0.

In 1972, League champions Derby and Cup winners Leeds declined to take part (they didn’t like each other much in those days, did they?). Instead, Third Division winners Aston Villa faced a Manchester City side who had finished fourth in the top flight.

The Charity Shield was moved to Wembley in 1974 – just in time for the Kevin Keegan/Billy Bremner shirt-removing spectacle – and was renamed the Community Shield in 2002.