In Memory Of Waggy

Family Bowled Over By Turn-Out

The main man would love to have been there, too.

Dave Wagstaffe’s passing has been marked a year on by friends of his in the corner of England that he came to regard as his second home.

The first staging of a memorial bowls competition bearing the winger’s name has been held on the green at the Old Glasson Caravan Park near Lancaster, where he liked to escape at every opportunity.

Thirty-six competitors, most of them local to the venue, took part on a sunny, blustery day on which many members of his family were also present.

“It was a lovely occasion,” said Dave’s partner Val. “I was delighted to be asked to present the trophy and we are all thrilled that the people up there want it to be an annual tournament in his honour.

“He was a very keen player himself for many years and ran the bowls section and their competitions for a while. The guy who won this week, a retired solicitor called Peter, is from a nearby village and was one of those he enjoyed playing against. He was partnered by Yvonne.

“They thought it was fitting to remember him in this way and to have this get-together to mark the month he passed away in.”

Now, try and keep up with this run-through of family members who were in attendance because it may be confusing! As well as Val and her brother Dave, the audience included Waggy’s sister Val and brother-in-law John, niece Zoe and granddaughter Chloe.

The two Vals plus Zoe and her family have caravans on the site, which has a lofty outlook over Morecambe Bay.

Wolves Heroes’ sister company Thomas Publications are delighted to have seen to it that Waggy’s name is now to be seen on the book shelves for the second time. 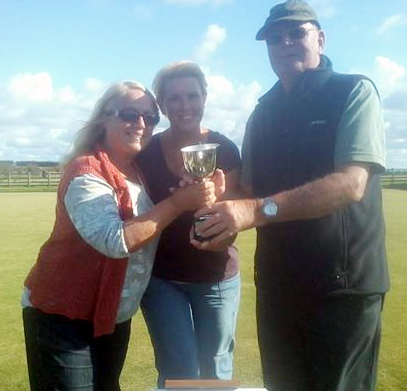 Following the success of his autobiography several years ago, he agreed to write a biography of his long-time pal and Wolves colleague Frank Munro – a unique case, as far as we know, of one footballer honouring a team-mate in this way.

Frank’s For The Memory, the title the two of them came up with together, is now on sale at £14.99, with a four-figure sum guaranteed out of the proceeds to each of the two charities most closely connected with them, The Stroke Association and Cancer Research.

The publishers hope to make a further donation to the two causes if the book sells well.