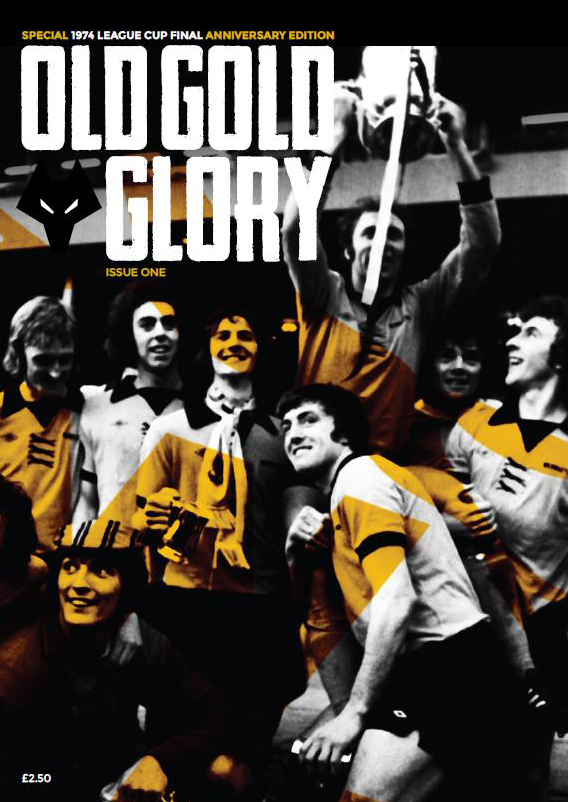 A new Wolves magazine has pulled off an opening-issue scoop by tracking down Gary Pierce after the keeper’s latest few years off the radar.

We at Wolves Heroes were delighted to track the surprise 1974 League Cup final hero when we knocked on his door in Bury in April, 2009, but he subsequently disappeared out of reach again until social media came to the rescue.

Graham Large, editor-in-chief of the Old Gold Glory nostalgia publication that went on sale for the first time yesterday, managed to contact him successfully and interviewed him and the other nine surviving members of the 12 who famously beat Manchester City 40 years ago.

“I found his son David on Facebook and asked him if he would see whether his dad would agree to be interviewed,” Graham said today. “I wasn’t expecting too much as I knew Gary had kept himself to himself for a good while, so I was delighted when he said yes.

“I had a good chat by phone with him and was surprised to find him quite reluctant to accept praise for his Wembley performance. He doesn’t seem to accept credit easily.

“He was incredibly enthusiastic about talking over the day as a whole, though, even if he did stress that he values his privacy up where he lives in Lancashire.”

Graham, an on-line marketing strategist in his day job, was a devoted A Load Of Bull reader and felt inspired to come up with an alternative with a difference after seeing similar publications aimed at Sunderland, Rangers and England fans.

The first issue of the 48-page retro magazine is all about the 1974 League Cup winners and, as part of his research, the Molineux season ticket holder went to meet three members of Bill McGarry’s heroic back four in Geoff Palmer, Derek Palmer and John McAlle. The other interviews were conducted by phone.

Mel Eves, Gerry O’Hara and journalists David Harrison and Alex Richards have also written columns and the lay-out is stylish.

“I got quite busy on Twitter soon after Dean Saunders was appointed here and when we were all feeling a bit down with how things were going,” he added.

“My Sunderland friends had reminded me that fans tended to look to the past for something good to cling to when a club were struggling and I had further encouragement for my idea after starting a Facebook page.

“Old Gold Glory, which was also the title of Steve Gordos’s excellent book about Wolves’ 1953-54 League title winners, was going to be purely digital but I decided to have a print version as well.

“We probably didn’t choose the best day to launch it as Wolves came up with a special programme yesterday to commemorate their 125 years at Molineux but we were pretty pleased with our own sales and have had good support from the guys at Wolverhampton Collectibles in Victoria Street and Shaun Moran at the Collectors Centre near the Indoor Market.”

Issue two is due out at the end of November and will bear a ‘We Are The Champions’ theme with its focus on the club’s various title successes, notably the aforementioned breakthrough campaign 60 years ago.

Graham, who also has a Wolves book project simmering, will look in depth at the lower-division conquests as well from the late 1980s, the 1976-77 Second Division championship-winning side and, thanks partly to positive comments on Twitter from Chris Iwelumo, those successes of a much more recent vintage.

Please click on http://www.oldgoldglory.co.uk/ for more information, especially on how the price per copy (£2.50 for the print version, £2 for the digital alternative) can come down with subscriptions.

The editor-in-chief can be contacted at graham@oldgoldglory.co.uk and has Jon Babb as his right-hand man. Follow their work also at https://www.facebook.com/OldGoldGlory and at @OldGoldGlory on Twitter.