Molineux An Ever Increasing Magnet 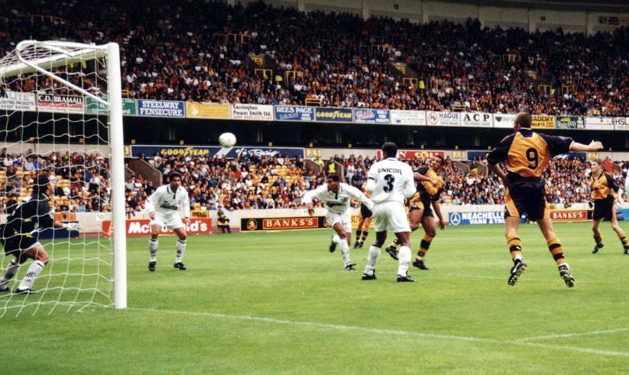 Don Goodman gets in an effort at goal in the Steve Bull testimonial game against Santos in the summer of 1997.

Monday, August 18: Spoke to Don Goodman by phone and was surprised to learn of the range of his co-commentating assignments. His expertise on the Championship is well acknowledged but he pointed out that, in a month that for him included the Blackburn v Cardiff season opener and the Ipswich v Norwich derby, he also has the QPR v Hull and Tottenham v QPR Premier League games to cover.

Saturday, August 23: Who said press boxes were strictly impartial? Mel Eves, standing in for the holidaying Andy Thompson on radio duties, was a picture of joy as he marked Wolves’ last-gasp winner at home to Cardiff this afternoon with a clenched-fist celebration to his colleague. No-one could ever accuse Mel of not being a Wolves lover.

Tuesday, August 26: Had the frustration of seeing Peter Knowles in Wolverhampton city centre – but only, on this occasion, through a window from a queue inside the bank. Sightings of him are fewer now he is a year or so into his retirement from his long-term employment at Marks and Spencer.

Saturday, August 30: This is proving to be a prolific time for spotting former Wolves players in and around Molineux. The rush of early-season home matches, including today’s victory over Blackburn, have also brought visits from, among others, Mark Burke, Cyrille Regis, Jim Barron, Steve Daley and Simon Osborn, the latter of whom served Margate as manager last season as the latest leg in his career. It must have something to do with the higher level Wolves are once more playing at – and the fact they are adapting very well to it.

Wednesday, September 3: Was asked to act as the go-between in asking Andy Thompson whether he would be interested in partaking in what sounds like a fascinating project. Best not say too much, for now, perhaps, except ‘Watch this space.’ One clue: It does concern a facet of the game that he was highly familiar with and expert at.

Tuesday, September 9: Have faithfully bought two copies of the new Wolves nostalgia magazine, Old Gold Glory – and was very impressed with the results. The editor, Graham Large, has not only been a keen purchaser of Molineux literature, for which we remain very grateful, but also set for a year or two on having his name on something out there on the shelves. Wolves Heroes’ co-owner John Richards, who, as the scorer of the winning goal is obviously featured strongly in this 1974-themed opening issue, is one of the interviewees. The Holsgroves at a London Wolves dinner. Photo by Rob Clayton.

Friday, September 12: Conversations with John Holsgrove are always bright, breezy and worthwhile, although I fear they might be fewer and further in between in future. He told me in our latest chat that he is spending much more time in Spain these days with work finally having taken a back seat.