Book Claims That Manager ‘Begged’ To Return To Ipswich

Charles Bamforth, having just made another working trip to the UK from his home in California, uses a revealing book as his inspiration for writing of the entertaining connections between Wolves and a club who, among others, extracted much out of Crawford, Hegan, Jefferson, Chung……and a certain hard-line manager. 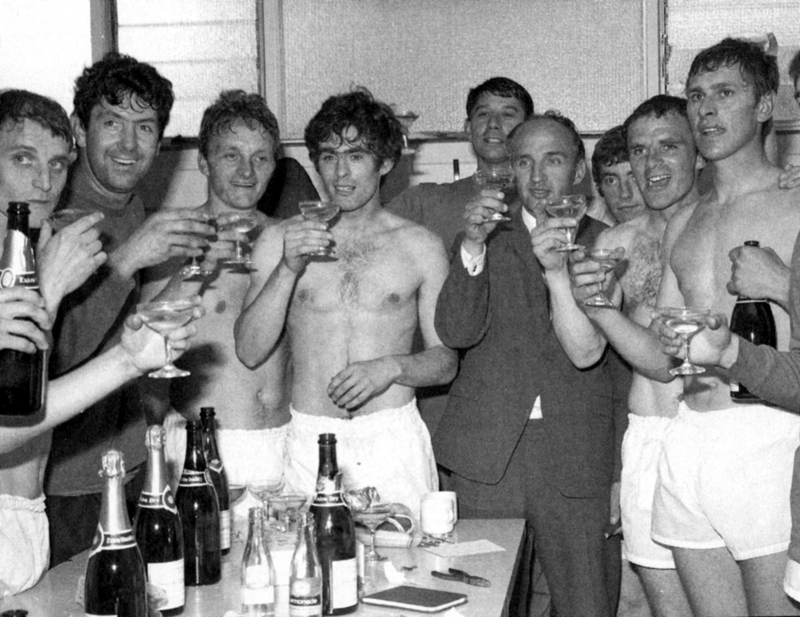 Bill McGarry, Sammy Chung, Ray Crawford and Danny Hegan celebrate among friends as the promotion champers is poured at Ipswich in 1968.

I reckon there was a higher power at play when Mick McCarthy became manager of Ipswich in November, 2012.

The late and much-missed Portman Road chairman John Cobbold would surely have loved to have been in the boardroom when the blunt-spoken, bent-nosed Yorkshireman was installed in the hot seat.

Totally different backgrounds of course: Eton and Welsh Guards meets back-street Barnsley and footballing coal-face. But Cobbold was an earthy soul in every way – and he loved and supported his managers, especially those with character and determination.

I am minded to write of ‘Mr. John’ (as he was affectionately known in both football and the brewing businesses), having just devoured the short but captivating book by Mel Henderson, Mr. John. John Cobbold: The Most Eccentric Man in Football Ever (Know the Score Books, 2009).

I rejoiced in it with both of my own hats in place: beer and football. The sorely missed Tolly Cobbold Brewery produced fine ales. John Cobbold (grandson of the Duke of Devonshire, of Chatsworth fame, and nephew of Harold Macmillan) developed a club who truly deserved admiration for heading to the top of the English game with their Championship triumph of 1961-62.

Cobbold was a serious drinker – and the stories in the book maybe only partially touch on the remarkable excesses associated with a chap who lived life to the fullest. And, truth be told, he was not really a football authority or even aficionado. But he believed in causes and he believed in Ipswich Town.

It was Cobbold who gave the lead to two legends, Sir Alf Ramsey and Sir Bobby Robson, but he was also the chairman to a man closer to Wolves hearts, namely William Harry McGarry. Naturally, it was this connection that especially fascinated me as it offered a further glimpse of the man who took over from Jackie Millburn at Portman Road and from Ronnie Allen at Molineux.

It seems that Mr. John seriously tried to tempt Ramsey back to his old stamping ground before settling on McGarry. However, quoting Cobbold: “Bill did a bloody good job for the club and the one thing we had in common was that I had just as extensive a knowledge of Anglo-Saxon words and phrases as he had. When he used to let rip, I could give as good as I took and we got on extremely well together.”

Cobbold admits that it was a shock when McGarry left for Wolves. “By his reasoning, they were a bigger club and he was far more likely to achieve what he wanted to achieve as manager with them,” he said.

But here is the rub – and I had not heard this before: “Within a short time of him leaving, he was begging to come back again. ‘Please, Mr. John, can I come back?'”

Of course there were more Ipswich links to Wolves than Bill McGarry. Ramsey’s functional but triumphant 1962 title winners had Ray Crawford leading the charge. Later, of course, McGarry brought two of his old squad from Portman Road to Molineux in the shape of the immensely talented but wayward Danny Hegan and robust defender Derek Jefferson. 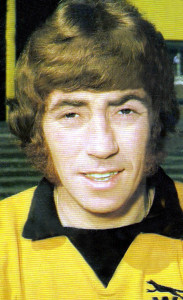 The stories told about Danny’s exploits in and around Wolves are well versed. Testimony to his ability to match John Cobbold in the realm of imbibing alcohol are perhaps best related in the book in a tale by Ipswich’s former centre-half Jack Bolton.

“I remember the night Mr. John, me, Danny Hegan and Joe Davin rowed out to the lighthouse off Felixstowe. We must have had three cases of whisky on board. The keepers were pleased to see us and we were in no hurry to leave!”

I wonder what John Ireland would have thought………