A Good Turn From Steve 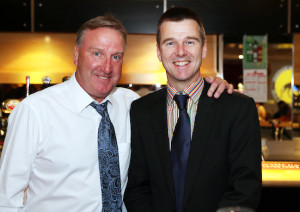 Steve Daley with Rob Clayton, a man to whom we are grateful for the use of several photos on this website.

Steve Daley has made an unpaid appearance at a sad reunion of Derby greats to honour the memory of one of his former Seattle Sounders team-mates.

Jeff Bourne, a somewhat junior partner in the Rams squad who twice won the League Championship in the first half of the 1970s, passed away from motor neurone disease in the summer at the age of 66.

And a large turn-out of former Baseball Ground colleagues was supplemented by a turn at the microphone from Daley, who travelled to the fund-raising event this week with Phil Parkes.

“I got on well with Jeff when we played together in the States and was very sad to hear he had died,” said Daley, who agreed to appear without a fee.

“He enjoyed the banter and the company of the other lads, as well as being a more than decent player. I remember him as an opponent over here well before Alan Hinton played a part in getting quite a few former Derby players over to Seattle.

“It’s a sign of his popularity that quite a few lads were there the other night, such as Roy McFarland, Rod Thomas, Archie Gemmill, Henry Newton, Roger Davies, Colin Boulton, John O’Hare and the present keeper Lee Grant.

“They did a question-and-answer session after I had done my bit and a good few bob was raised apparently, which is great news.”

The £10-per-head evening was held at Swadlincote Constitutional Club, where Bourne was a steward for ten years, and was held to raise money for his widow and offspring. 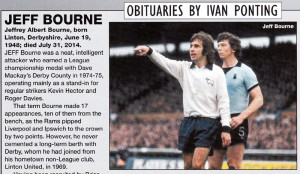 The opening paragraphs of Backpass’s lengthy tribute to Jeff Bourne.

Bourne played 73 League games for Derby after being signed from non-League Linton United by Brian Clough. He also served Crystal Palace and Sheffield United in addition to several clubs on the other side of the Atlantic.

He didn’t make any senior appearances when Derby won the League title in 1971-72 but played 17 times when they regained the crown under Dave Mackay in 1974-75.

Daley was back at the mic last night at a function in Doncaster.