In Further Memory Of Bert 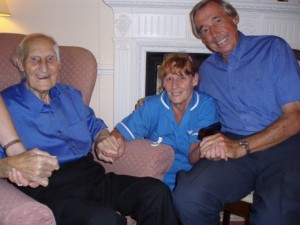 One of the last meetings of two of England’s finest keepers.

Gordon Banks is to further honour his long-time friend Bert Williams by appearing for free at a fund-raising night in the West Midlands a week tomorrow (Wednesday, October 8).

The close relationship between the two was cemented in recent years by a BBC Midlands Today feature showing them together at the Shifnal home of Wolves’ most famous ever goalkeeper.

Banks revealed on camera how, as a boy growing up in Chesterfield, he had marvelled at Williams’ daring and agility on the occasions he was taken by his father to see Wolves play at nearby Hillsborough and Bramall Lane.

Bert died in January a couple of weeks short of his 94th birthday but not before writing another sizeable cheque to the Alzheimer’s Society – a cause he had supported tirelessly since the loss of his wife Evelyn to the illness in 2002.

“He has so far raised more than £162,000, including the sale of the lead crystal and glassware items which you at Wolves Heroes kindly publicised and supported,” said the duo’s good mutual friend Glyne Wetton.

“We’re hoping this event brings in another good sum and it’s so kind of Gordon to offer his services for free. I’m going up to his place at Crewe to fetch him next Wednesday and he will be doing a question-and-answer session which should be fascinating listening.”

The evening is not at Molineux but at the home of Walsall, the other West Midlands club Bert played for and, where, like at Wolves, he was president of the former players’ association.

“He loved Walsall as well,” Glyne added. “It was they who gave him his big chance after all at a time when he was only about 5ft 9in and clubs elsewhere were having doubts.

“He played more than 25 games for the Saddlers before the war and many, many times more than that during it, so he had some deep roots there. I also took him to matches at Bescot in recent years.

“I think he would be pleased that we are having this do in the Saddlers Club.” 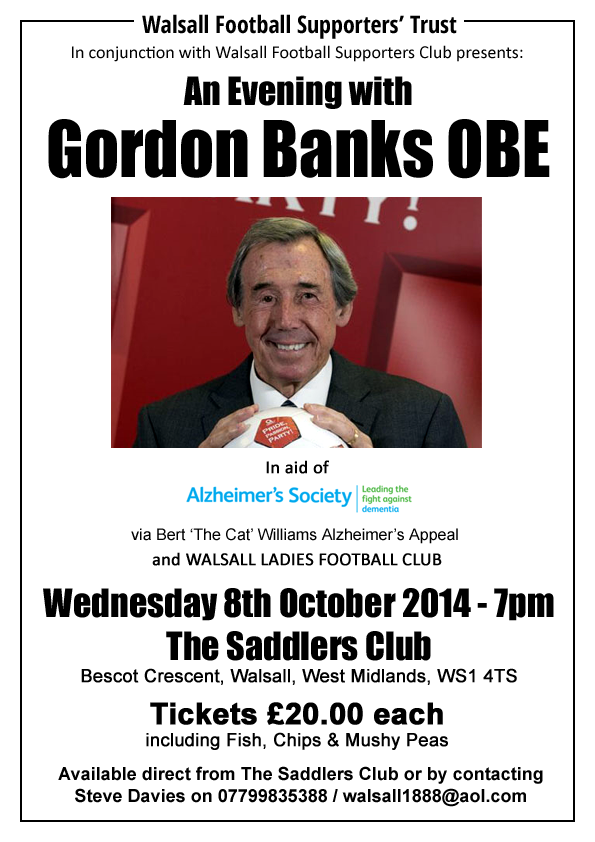 A great night out…..

Tickets for the fish and chip supper and q and a, which is being run in conjunction with Walsall Ladies Football Club, cost £20 and are available from Steve Davies at the Saddlers Club by email at walsall1888@aol.com or on 07799-835388. Guests should report on October 8 at 7 for 7.30pm.

Among the auction items are a signed print of Bert and an autographed print of Banks’s breathtaking save from Pele in the 1970 World Cup finals in Mexico.

The evening is being hosted by BBC Midlands’ Ian Winter, who is also giving his time free of charge to support the Alzheimer’s charity.