Reminiscing Over The Blues 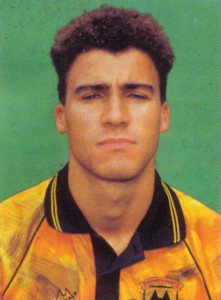 Mark Burke – in one of the less popular Wolves kits.

Tuesday, September 16: Sky Sports’ Matt Murray was by no means the only Wolves link present when I took in the Birmingham v Sheffield Wednesday game tonight. On the pitch, former Molineux youngster Stephen Gleeson, having moved to St Andrew’s in the summer following 206 games for MK Dons, went on as substitute for David Davis while, in the stand, there was a meeting between Mark Burke and Paul Jones – briefly midfield partners at Wolves in the early 1990s.

Wednesday, September 17: Was delighted to bump into Phil Parkes while taking a walk through Wolverhampton this morning. Lofty was taking advantage of the warm autumn sunshine by sitting outside his favourite caffeine venue, Greggs, opposite the Wolves club shop in Dudley Street. Having spent a pleasant ten minutes with him, I wondered how many of today’s players might be doing the same in 20 or 30 years’ time. He seemed to genuinely enjoy engaging with anyone who stopped by for a chat.

Saturday, September 20: Saw Wolves avoid any more pain at the hands of Mark Davies as they held on to beat Bolton by the only goal at Molineux. The midfielder went on as a sub mid-way through the second half and picked up no more than a booking this time. It’s time to worry for Bolton boss Dougie Freedman, the one-time Wolves forward who appears to be lurching towards the sack….

Monday, September 22: Where else would you expect to be directed to in order to meet Graham Hawkins other than to the touchline at a local match? A visit to the Potteries coincided with his scouting mission to a game at a college in Newcastle-under-Lyme, so we spent half an hour in conversation while the play continued.

Wednesday, September 24: Saw a different side to George Berry, commercial head of the PFA, as he kindly gave me a guided tour of the players’ union headquarters. I was in Manchester and took advantage by dropping in to deliver his ordered copy of the Dave Wagstaffe/Frank Munro book. It seemed strange to step into a quiet square behind Costa Coffee and to think these were the buildings outside which Gordon Taylor had given some difficult interviews. And that memorabilia hanging on the walls of his empire is something else!

Wednesday, October 1: Had been hoping to meet the daughter of late former Wolves keeper John Oldfield at Huddersfield’s visit to Molineux tonight but had the pleasure of the next best thing……a quick meet by the Billy Wright statue with her boyfriend Alan Hurst. He had travelled down on a supporters’ coach after getting in touch with this website several weeks ago, when he and his partner Karen, who was five when the family left Wolverhampton, expressed gratitude for filling in some of the holes in her dad’s football career through our work. 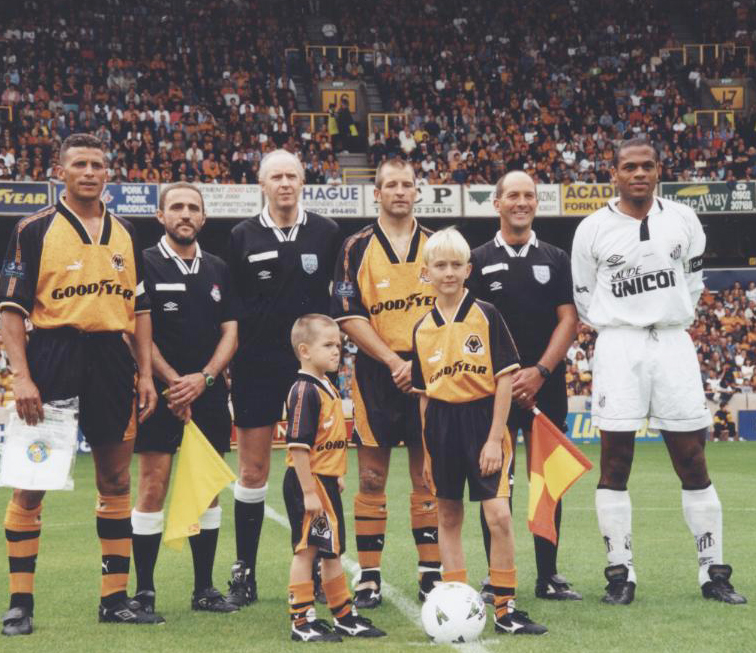 Keith Curle as Wolves skipper at Steve Bull’s testimonial game against Santos in 1997. Photo by ‘Mutchy’.

Saturday, October 11:  Good news that Keith Curle has been given another chance in management – and is making a great start in it. He will be tested to the full in trying to turn round the fortunes of struggling Carlisle, who were relegated by Wolves on the final day of last season, but has now had three wins in his first five games. The late 1990s Molineux skipper wasn’t everyone’s cup of tea but I got on well with him here and thought he was a good player.

Thursday, October 16: Was pleased to hear Derek Parkin, on a visit to his home near Telford, talking enthusiastically about the new blood on the committee of the Wolves Former Players Association. Derek has been ‘in office’ for many years and is delighted to have three long-time former team-mates at his side now in Mike Bailey, Phil Parkes and John McAlle.