The Fondest Of Send-Offs

Funeral Of Well-Decorated Defender Who Lived The Dream 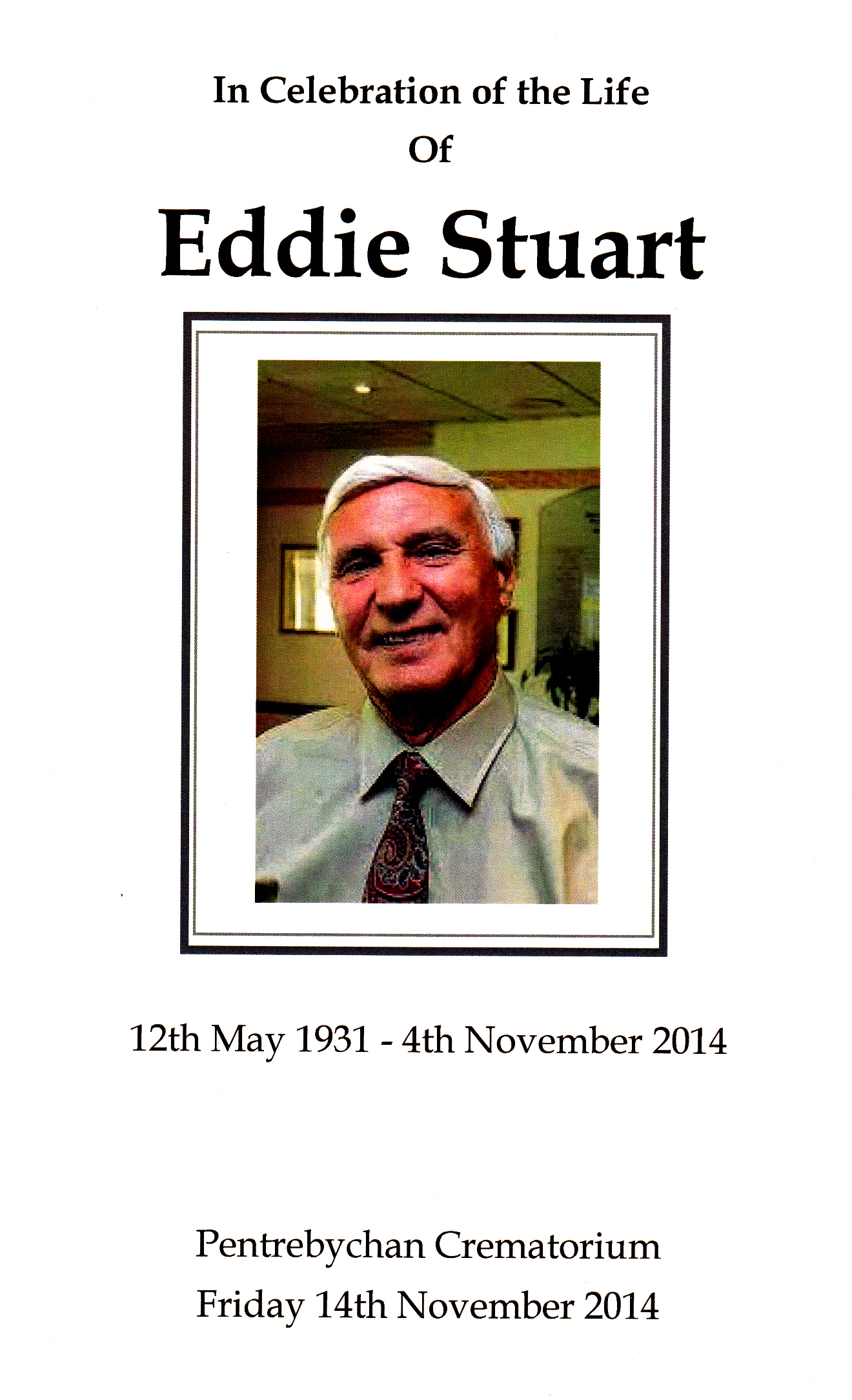 Eddie Stuart wasn’t alone in landing on these shores from South Africa and arriving at Molineux in pursuit of his football dreams.

What sets him apart from the likes of Des Horne, Cliff Durandt and the lesser seen Tommy McMullan, though, was that his was a story of enduring success and contentment.

He stayed at Wolves for more than a decade, became one of their most decorated players by assisting in the winning of three League Championships and one FA Cup and made this country his home for life.

“Edward Albert Stuart was a quite remarkable man,” his daughter Philippa told the 80-plus mourners at his funeral service at Wrexham Crematorium this morning.

“He was born in Middelburg in the Eastern Cape, the oldest of four children, but left home at 19. He had a dream and didn’t think twice. He just followed that dream.”

Foreign players would these days receive help from their clubs with housing, opening bank accounts and getting any children into good schools. Initially, Eddie simply had some digs in Burland Avenue – the same road in Claregate in which none other than Billy Wright had his meals put on the table by a friendly landlady.

The two jumped aboard the same bus to training and matches – the number 14 or 34 – but the South African soon had eyes for more than just a free ride in the company of what Sir Jack Hayward called ‘England’s finest player and gentleman.’

It was on this route that he first fixed his gaze on the pretty 16-year-old Wolverhampton Girls High School pupil who was to be married to him for 57 years.

In the lovely homes Cynthia and he built around Wolverhampton and, for the last nine years, just over the Welsh border in Wrexham, it might have been easy to forget the sacrifices he made. His mother, who lived well into her 90s before passing away some years ago, found the ordeal of waving him off to England after his return visits to the republic so emotional that he admitted it became more and more difficult to go and see her.

Philippa, who has a brother Michael and sister Belinda, spoke of him as a ‘very cheeky’ grandfather to seven children and poked further gentle fun at his love of beige clothes as she ended her address by putting on a peaked cap he had in that colour.

Wolves scarves and badges were worn by several members of the extended family, especially the younger ones, who are all familiar with his passion for a lovely garden. We referred in our obituary last week to the delightful outlook he, as head of the residents association, had helped create beneath the window of the apartment he and Cynthia lived in at Wightwick Court, not far from the Mount Hotel. “Wimbledon had nothing on his lawns,” Philippa added. “His stripes and edging were perfect.”

The family lived prior to that in Tyningham Avenue on the edge of Tettenhall and became firm friends with Father Paul Ward, so much so that he flew in from Dublin to take today’s service, having also attended the defender’s 70th birthday celebrations in a favourite retreat in the New Forest.

We hope we have done some justice to the playing side of Eddie’s life in our earlier article but might add the reminder here that he could have been picked for Scotland – the family surname gives a clue as to his parents’ nationality – had their selectors not at the time pursued a home-based-players-only policy that also left Malcolm Finlayson full of regrets.

What is abundantly clear – and underlined by the moving tributes from his grandkids in the order of service – is that Stuart was very much a family man.

He and Cynthia, who became head of year in her teaching career around Wolverhampton, moved in 2005  to be closer to her cousin in North Wales, where they became social members at Wrexham Golf Club, the venue for today’s after-service refreshments.

They appear to have been good at life, with him having entered what Philippa called ‘the Arfur Daley phase’ after his football career was over. This ‘true entrepreneur’ had hair salons across the patch and also a Newcastle-Under-Lyme dry cleaners at which Sir Stanley Matthews was a regular visitor.

Reflections on his time in the Potteries also bring to mind the realisation that, like Eddie Clamp, he faced Real Madrid (five-time European Cup winners around that time, remember) on three occasions without being on the losing side.

As well as being in Wolves teams who beat the Spanish maestros 3-2 at home and drew 2-2 in the Bernabeu, he was skipper of Stoke at the time of their 2-2 friendly draw with the same crack opponents at the Victoria Ground – a fixture for which Matthews actually led the side out and performed the pre-match niceties with Alfredo Di Stefano. 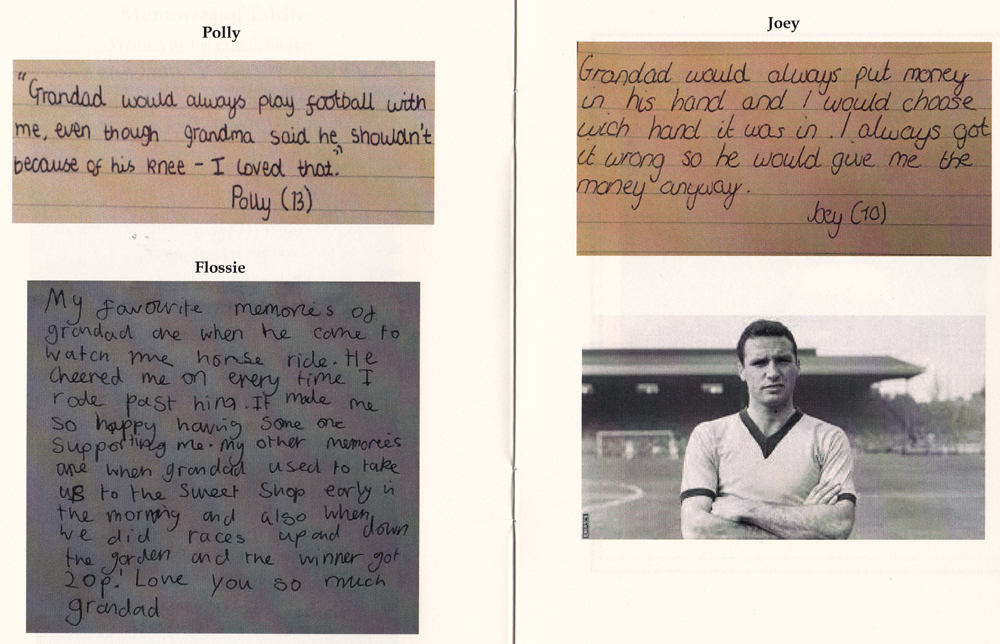 He was some player and some man.

* Ron Flowers, Jez Moxey, Wolves Former Players Association honorary secretary Peter Creed and businessman and charity worker Glyne Wetton were also present, along with Wolves Heroes, at today’s service. On the back row were two Stockport fans in the blue shirts worn when, with Eddie as vice-captain, the club won the Fourth Division in 1966-67. Freddie Goodwin was also in that side, who were skippered by Matt Woods – an FA Cup finalist when Wolves beat Blackburn at Wembley in 1960. Woods, another central defender, died last month.  More than a dozen members of Eddie’s family are due at Molineux for the November 22 clash with Nottingham Forest, at which a special tribute will take place.