Wolves: A Famous Name Up In Lights

Assisting With The Switch-On, Again And Again 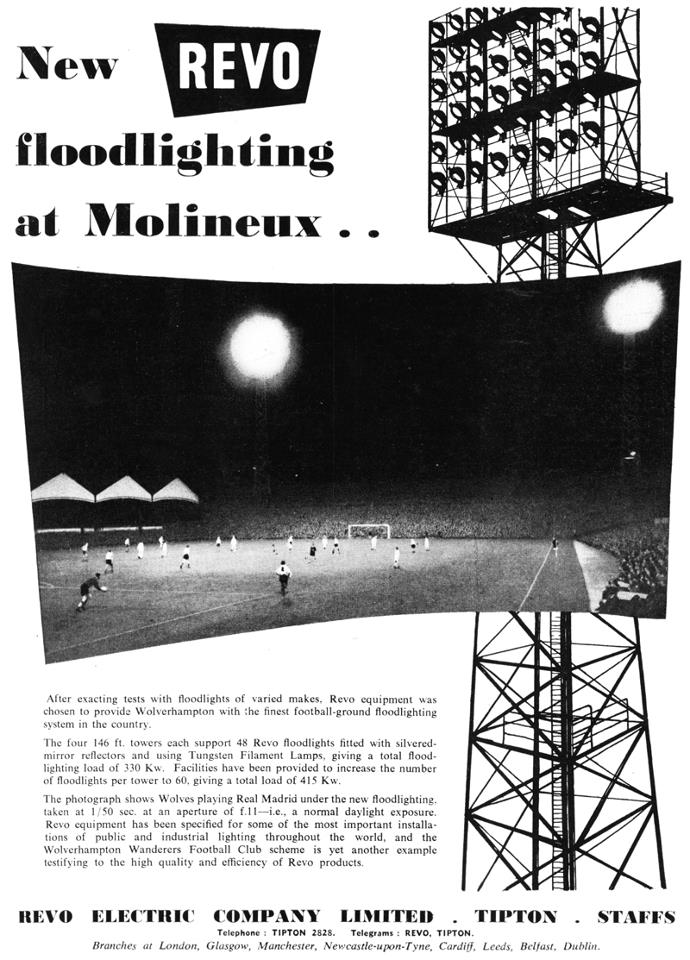 A memorable addition to the Wolverhampton skyline.

Alongside several of the away friendlies and testimonials listed in the Wolves record books are games marked ‘OL’.

The fact that five of these matches were in 1953 casts some light – if you will pardon the pun – on what the abbreviation stands for. That was the year the original famous Molineux floodlights were installed.

Football was being illuminated for the first time and Wolves, as one of the country’s top teams, were understandably a big draw among rival clubs seeking a glamourous fixture to mark their own big switch-on.

In the months before the South Africans came to these parts to perform the same duty, Wolves won 4-1 at Bristol City, 4-2 at Bilston and 4-2 at Hednesford (against Albion) and also lost 3-1 at Hull in ‘OL’ or ‘opening of floodlights’ games.

And their participation in matches staged to mark the introduction of this exciting new feature at football grounds continued as the 1950s turned into the 1960s.

We made further mention last month of the 2-0 Wolves win on the night they marked the opening of Celtic’s lights in 1959 but there were three further games the club played in relatively close succession some years later at a time when it might have been assumed most grounds had long been staging matches under dark skies.

The record books show they travelled to Hendon on September 25, 1962, to record a thumping 7-1 victory over the side who had won the FA Amateur Cup at Wembley in 1960 in the year Stan Cullis’s side beat Blackburn in the FA Cup final.

Despite the fixture falling in between successive 3-2 Saturday victories over Ipswich and Liverpool in the League, Wolves took their strongest available side to North London and opened the scoring through Ron Flowers in the 12th minute. It was the second half before Cliff Durandt doubled the lead, then Flowers hit a beauty from 30 yards before Alan Hinton celebrated his call-up the previous day for his first England cap with a brace. Terry Wharton and Jimmy Murray completed the scoring before Hendon, who had Dave Aubrey in goal instead of Britain’s Olympics keeper Mike Pinner,  pulled one back through Paul Bates.

Two weeks later, Wolves did a similar favour north of the border when they travelled to Morton and unveiled a newcomer by the name of Peter Knowles, who had scored at Albion on his Central League debut two days earlier.

The 17-year-old went on as a half-time substitute for Barry Stobart and was given his chance partly because of injuries to Flowers, Chris Crowe and Ted Farmer.

The Express & Star report described him as ‘an exciting prospect’, although it was a night for compliments. The capacity 12,000 crowd at Cappielow Park gave Wolves a standing ovation following their 5-2 victory, which was built on two first-half goals from Jimmy Murray, the second of them from 35 yards.

In between, the forward set up Peter McParland for the second and, although McLochlan quickly pulled two back for the Scottish Second Division side, McParland went on to complete his hat-trick as Wolves shone under the Greenock lights.

Wolves, who two days earlier had lost their unbeaten 1962-63 record when they lost 2-0 at home to Everton in their 12th League match, were captained by George Showell and named the following side: Davies, Showell, Thomson, Goodwin, Woodfield, Kirkham, Wharton, Stobart (Knowles, HT), McParland, Murray, Hinton.

There is one other Wolves game from that era which marked the opening of a host club’s floodlights but isn’t referred to in the record books as an ‘OL’ match. 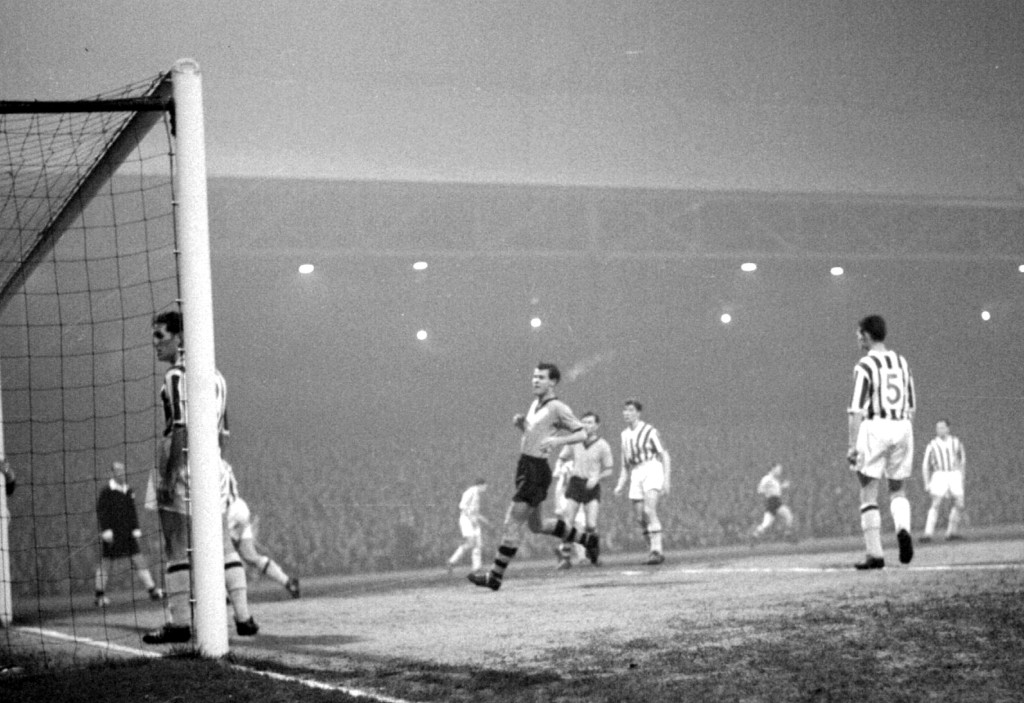 A momentous night for Second Division Huddersfield as they beat holders Wolves in the FA Cup in the first game under the Leeds Road floodlights. Photo courtesy of the Huddersfield Daily Examiner.

Huddersfield fans fondly refer to the new addition to their old Leeds Road ground in 1960-61 as ‘the Denis Law floodlights’ as it was the brilliant forward’s sale to Manchester City that financed their installation.

And, after the sides had drawn 1-1 at Molineux, the switch-on came at the FA Cup third-round replay against holders Wolves four days later on January 11, 1961.

The attendance at a club then in the lower half of the Second Division was a whopping 46,155 and the vast majority of them were in raptures as their side edged through 2-1, with one of their goals coming from future Wolves man Mike O’Grady. Murray netted for Wolves.

* Former Wolves manager Graham Turner, along with ex-striker Garry Thompson, is appearing at Old Hill Cricket Club this Friday (November 28).  Tickets for the evening, which starts at 7.30pm, cost only £5 and can be bought at www.ticketsource.co.uk/oldhillcc