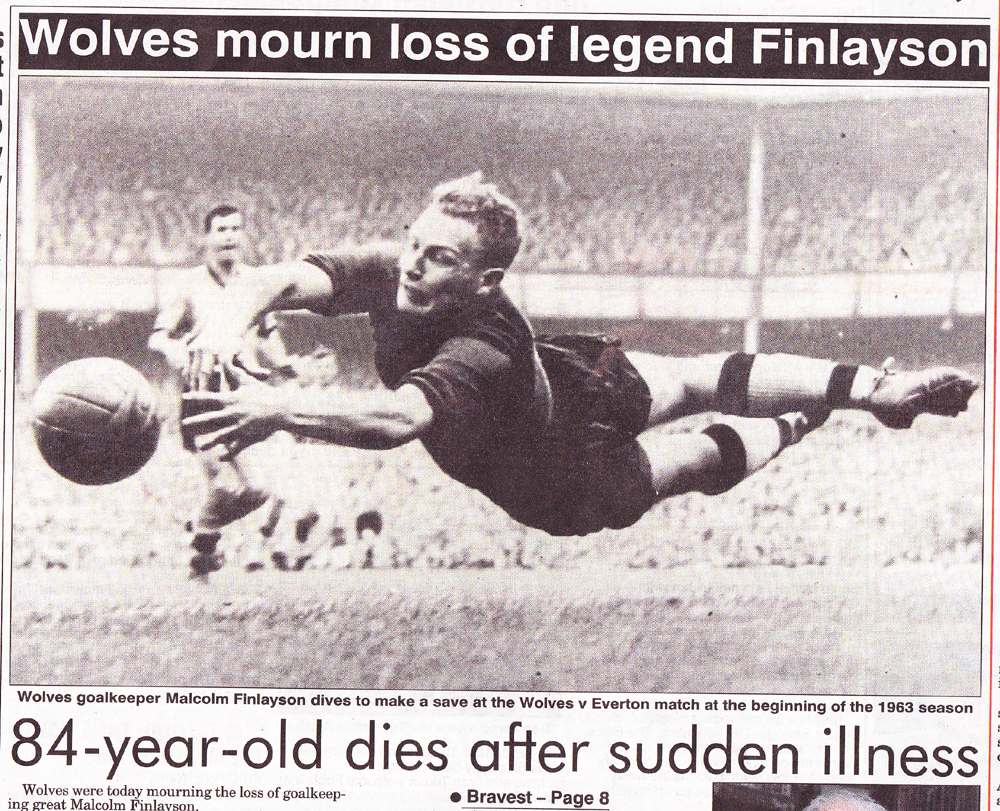 Finlayson in flying action at Goodison Park, as depicted by the Express & Star in the story announcing his death.

News of Malcolm Finlayson’s sad passing-away last week has prompted lifelong Wolves fan Jonathan Russell to contact us and share his treasured memories of watching the goalkeeping legend in the flesh.

Jonathan now lives at the age of 68 in London, where he worked for many years in the shipping industry, but grew up in the Merseyside area.

And that meant boyhood visits to see Wolves at Goodison Park and Anfield in games that stood out as big dates in the career of the man who died last Wednesday, aged 84.

“The finest photograph I have seen of Malcolm was one from the game at Everton my father took me to on the last day of the 1958-59 season,” he said. “It was the first time I saw Wolves play and I remember being in tears that morning when learning from the Daily Post that Billy Wright wouldn’t be playing.

“Wolves were already champions and won 1-0 with a goal by Jimmy Murray. Malcolm actually had little to do but I remember him sprinting along the byeline out of his goal and hurling himself to try to stop a back-pass, possibly from Eddie Stuart, going out for a corner.

“He didn’t succeed but I just marvelled at his athleticism and was thrilled when I saw this incident captured in a photo.

“I was even more pleased a month later when I wrote off for photos of Malcolm, Billy and Eddie that were being offered in the Charles Buchan Football Monthly magazine and received this very photo of Malcolm.

“In a way, we all wanted to be goalkeepers, although their job was even more dangerous then that it is now. He always seemed to have his sleeves rolled up and was so brave.

“It was as if he was announcing that he was ready for business and didn’t need any particular protection.”

After winning back-to-back League Championship medals, playing in a victorious FA Cup final team at Wembley, the Scot remained first-choice keeper virtually throughout another two seasons before being replaced by Fred Davies.

Curiously, his last two Wolves appearances were both at Anfield, where Jonathan recalls seeing him perform heroics despite the side’s 6-0 defeat in September, 1963, on the latter of those occasions. 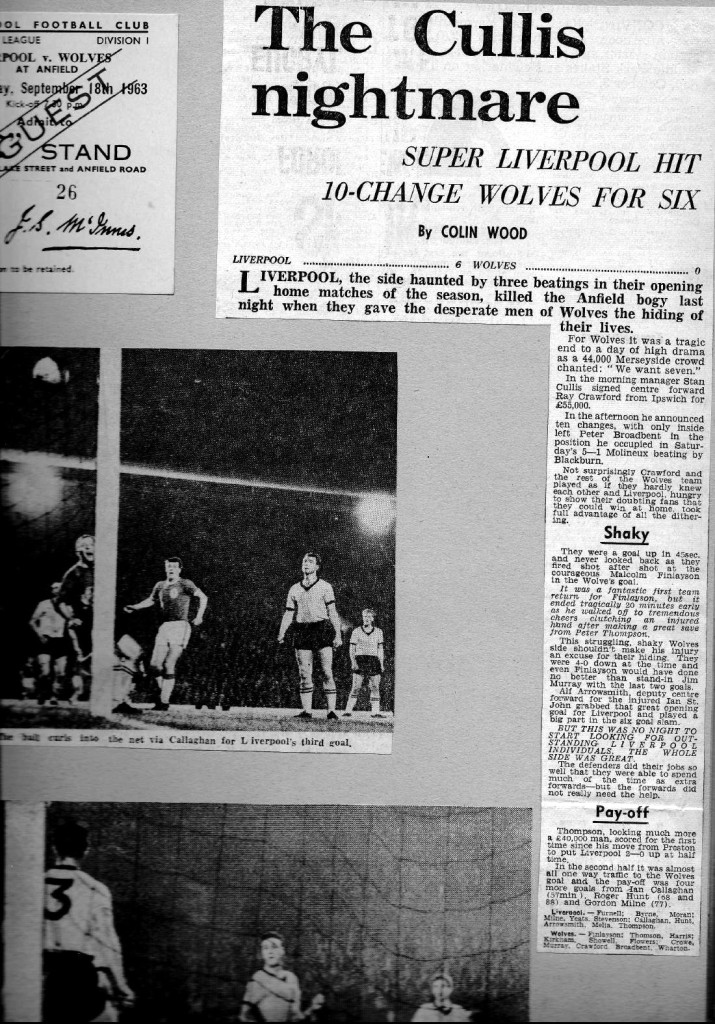 Evidence of a harrowing night for Wolves at Anfield…..and a mixed one for Malcolm Finlayson. Please try clicking on image to enlarge.

He adds: “The Daily Mail cutting I have in my scrapbook is of a match report written by Colin Wood and says: ‘Liverpool were a goal up in 45 seconds and never looked back as they fired shot after shot at the courageous Malcolm Finlayson in the Wolves goal. It was a fantastic first-team return for Finlayson but it ended tragically 20 minutes early as he walked off to tremendous cheers (it was a long heartfelt ovation from every spectator which lasted all the way from the goalmouth to the tunnel), clutching an injured hand after making a great save from Peter Thompson.’

“Malcolm was a magnificent role model both on and off the pitch and a real hero of mine. Not only was he a highly agile and capable keeper but one of the bravest. He was always prepared to dive fearlessly at the feet of forwards to win the ball. This is a very sad time.”