More Memories Of Game That Led To Launch Of European Cup

There were 37,509 present when Manchester City – hardly weary veterans on the Champions League stage – took on Roma early in the Group E programme which ended for them in success last night.

The club’s second winning of the Premier League title in three seasons remained fresh in the memory and September still had a few hours to run as they did battle with the Italians at the spacious Etihad Stadium. Not a great turn-out then, was it? 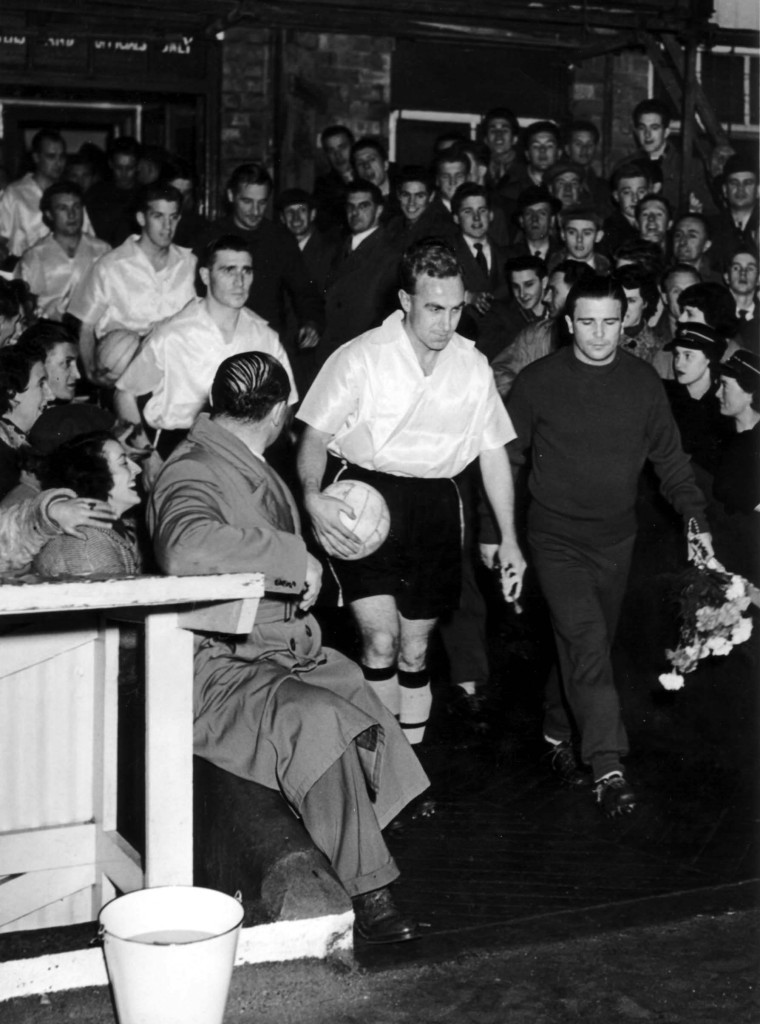 The big entrance….Honved in tracksuits, Wolves in the satin, fluorescent shirts they had developed for use in the winter gloom.

Sixty years ago this week, it was raining, misty and cold as Wolves prepared to face Honved. It wasn’t a competitive fixture as such, with either league placings, qualification for something bigger and better or any significant silverware at stake. It was what we would now call a friendly. The official attendance was 54,998, with many others disappointed. Now that’s what you call a crowd.

In 1990, I went to Bert Williams’ house to interview him at length and quoted him in Wolverhampton Wanderers Greats, the book I was writing, as saying: “There seemed to be as many people outside the ground as inside it.

“Thousands and thousands were locked out and had to make do with a commentary relayed to them. But there wasn’t a moment’s trouble as far as I can remember.

“Afterwards, there were hats, scarves and even crutches that people had dropped in the crush and been unable to pick up.  One lady even lost her shoes and our trainer Joe Gardiner had to lend her a pair of boots to go home in.”

It has been said before but it’s worth repeating because it’s a fact that made the reporter from top French sports paper L’Equipe blink when he heard it at the 60th anniversary ceremony in the Molineux Museum on Saturday: The official crowd was almost 11,000 higher than the one which had gathered to see Wolves beat Tottenham 2-0 on a spring afternoon eight months earlier and so lift the League Championship for the first time. Truly astonishing.

Virtually all the players on duty saw the Honved game as their greatest night or day in Wolves’ colours, match-winner Roy Swinbourne calling it ‘something else.’ Stan Cullis described it as the high spot of the club’s entire history.

Chairman James Baker had lit the touchpaper by announcing at the previous night’s banquet that the Hungarians were ‘the greatest team ever to come to the town.’

Bill Slater had seen the emerging stars close up in the 1952 Olympics and recalled decades later: “The Honved players walked on to the pitch in their smart tracksuits like a well-drilled military platoon, which was not surprising since they were a team of the Hungarian Armed Forces.

“The speed with which they turned defence into attack had to be admired. They were wonderful artists with the ball. But we were very much a team and that ethic allowed us to keep powering on.

“The night has become so legendary among supporters across the land. The reaction to the game was exceptional. One newspaper headline referred to Wolves as ‘Champions of the World.’ It was a matter of national pride and gave everyone a lift in the way only football can.”

Honved led from the tenth minute when a free-kick given for a borderline hand-ball offence by Ron Flowers resulted in Ferenc Puskas crossing for Sandor Kocsis – renowned as the finest header in the global game and the 11-goal leading marksman at the 1954 World Cup finals – to nod home.

With the home fans still catching their breath and starting to fear a defeat of England v Hungary proportions, Kocsis escaped on the break and fed Ferenc Machos, who raced clear to ping a right-foot shot past Bert Williams.

The heaving South Bank was the place to be for seeing the best of the action at closeish quarters that memorable night. The comeback started four minutes after half-time when another disputed decision gave Johnny Hancocks the opportunity he took to pull one back from the penalty spot.

Not for nothing were Wolves regarded as the fittest 11 in world football and Phil Morgan wrote in the Express & Star of a second-half onslaught to rival the one that had seen them do all the scoring after the break when they ran out 4-0 winners over Spartak nearly a month earlier. 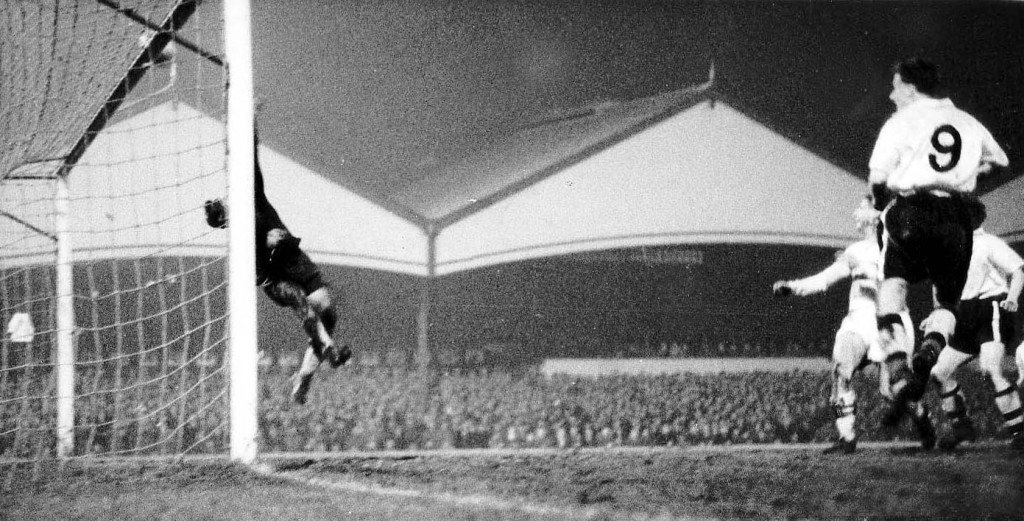 Thrills at the North Bank end, too…….

The saves Williams had made from Kocsis and Machos at 2-0 came to be seen as even more important when Dennis Wilshaw’s lob was headed home by Roy Swinbourne for the equaliser.

Barely 60 seconds later, Bill Shorthouse and Leslie Smith combined for Wilshaw to release Swinbourne to drive past the outstanding Farago. Wolves, two down in the first 14 minutes, had netted twice in the last 14 to sensationally turn the game on its head.

Bert ‘got’ it, even 50 years later, when the subject of the game’s importance cropped up. He had been watching from the sidelines when the magnificent Magyars trounced England at Wembley and said he had felt so much for Billy Wright, one of the players the visitors had on toast that afternoon.

Cullis drummed into his team the fact that they were playing for national pride, which might explain why hats, scarves and match programmes were thrown in the air to celebrate Wolves’ equaliser.

“Surely, in all sporting history,” the Express & Star sports editor ventured, “there has never been such a volume of sound to equal the three roars that heralded Wolves’ goals.” And, by way of putting the splendour of the comeback triumph in context, he added: “Is there any side in England, nay the world, who can give Honved two goals start and then whip them?”

The nation had been able to follow events from afar through what was then commonly referred to as ‘the wireless’ and fans from Newcastle to Plymouth were enthralled at whether Williams could keep out the visitors’ attempts to snatch a last-gasp equaliser.

Imagine the exasperation when, with The Cat waiting to pounce on a loose ball in the dying seconds, the plug was pulled on the BBC feed from Molineux and, at the flick of a switch, listeners were instead treated to The Show Band with 365 Kisses after the announcer butted in by saying: “It is already half a minute past nine. I will give the final result later.”

The Birmingham switchboard was jammed with complaints and, when that was hurriedly closed, callers targeted London to vent their anger. Half an hour later, The Show Band were taken off and an embarrassed announcement was made: “This is a very repentant Adrian Waller saying I realise I made a mistake fading out that great match. This is the kind of mistake we make only once.”

Gabriel Hanot had no such problems. As editor of L’Equipe, he was in the Molineux press box and saw the potential for organised competition between Europe’s best.

He saw Wolverhampton as being submerged in an ‘atmosphere of rain and smoke’ but went away with a clear vision and wrote: “A championship of the world, or at least of Europe, for clubs, deserves to be promoted. We’re going to give it a try.”

The journalist is seen as the founder of the European Cup, which followed less than a year later. Wolves, as runners-up just behind Chelsea, missed out and such was the haughty attitude of football administrators in this country that the Londoners were discouraged from going in anyway. 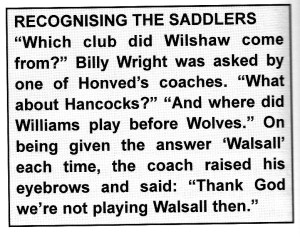 Eventually, the resistance was overcome and Wolves competed (briefly) in the 1958-59 staging of the tournament and then in three rounds a year later.

They haven’t made it back since but can bask in the reflected glory of knowing a fixture they staged 60 years ago this Saturday was a catalyst for continental combat of a purer form than the mega-millions event Manchester City and others now know.