Converted To Full-Back, Then Misfortune Struck

Charles Bamforth catches up with another fondly remembered figure from his youth – a Molineux defender he recalls seeing when, in his infancy, he travelled from his Lancashire home to watch a Wolves Central League game at Bolton. 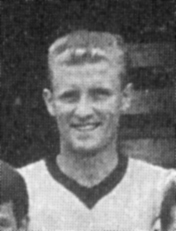 John Harris doesn’t remember the player’s name but an unsuccessful trialist from ‘somewhere up north’ changed his career.

It didn’t lead to as major a first-team impact at Molineux as he would have liked – but perhaps it was the difference between making the grade and falling by the wayside in an era when Wolves had such immense stocks of talent.

“I went to Wolves as an inside-left,” he says. “Of course there were some great forwards at Molineux, not least the likes of Peter Broadbent and Colin Booth.

“This trialist came to play for the Worcestershire Combination team (Wolves’ fourth side) at Castlecroft. They thought he was a full-back but he was an inside-forward.

“Jack Screen asked me to play at full-back because they wanted to know what this lad could do. So I did – and I stayed there.”

Harris, who has always been known as John despite being David John Harris, had been at the Wanderers for three years already – testimony to the challenges that youngsters had to face in making their way through the deep ranks at what was then one of the top clubs in Europe.

He was spotted while playing for Dormston Secondary Modern School and for the Pick of the League side in the Tipton, Coseley and Sedgley district.

“While I was a youngster at the club, I was also serving my apprenticeship as a builder and stopped that only when I signed as a full professional,” he added.

Harris’s career was interrupted by National Service. He served in the RAF, first at Bridgnorth, then at Cosford in catering. Then it was to Bomber Command for a few months. He was given time off to play for Wolves.

In 1958-59, when the club won everything at every level except the FA Cup, he was captain of the Birmingham League side (the third team). It took several years for him to graduate to the Central League side and a full six before he finally got to make his first-team debut – on August 26, 1961, in a 3-2 home victory over West Ham.

“I felt a bit embarrassed, to be honest, to be on the same pitch as the likes of Bobby Moore,” he admits.

The next game came in the midweek, against Aston Villa. Personal disaster befell the blond defender, when he broke his leg in a clash with Vic Crowe. He is quick to stress there were no grudges.

“We went on to be good friends when I was at Walsall and he was at Peterborough in the old Third Division,” he added.

“I was out for 12 months. When I got back, there was no real problem with the training but, when you get in a game, 11 on 11, it is very different and I was struggling.

“Stan Cullis had me in his office, telling me this and that. I remember saying: ‘Well, if that’s how it is, I can always go back to my trade’.  But he told me he would put me in the Worcestershire Combination side on the Wednesday at Castlecroft and he would be there to watch. He played me at centre-half and you are always on the move in that position. Everything went well and I went on from there.

“In 1962-63, I was chosen to play at Manchester City and David Wagstaffe ran me ragged for 90 minutes. It ended 3-3. I never played for the first team again but I can look back and say that every time I pulled on the old gold shirt for the first team, we won or drew!” 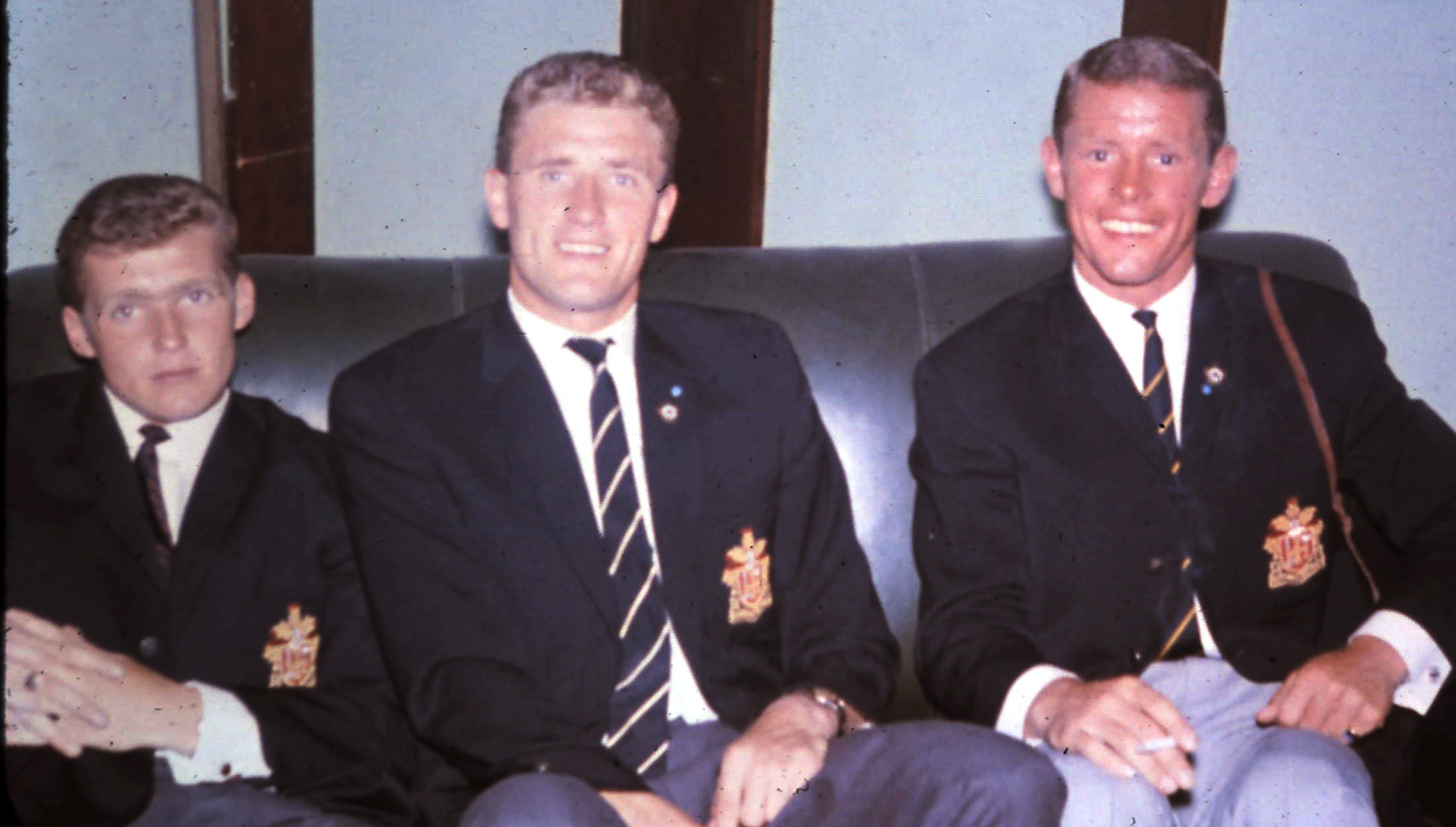 John Harris (centre) with Terry Wharton and Barry Stobart on tour in the States in 1963.

Perhaps Harris, who also went on the long tour of America and Canada in 1963 and played twice on the squad’s travels, would have had more opportunities in the preceding months had so many games not been lost to the terrible winter weather. As it is, long-standing supporters will look back fondly to the regular full-back pairing in the second team of ‘Harris J, Harris G’ over two seasons as neither John nor Gerry (no relation) could shift George Showell and Bobby Thomson from the senior slots.

“My best pal was Ted Farmer, who I am still in close touch with,” he says. “Going to training, he was already on the bus to Wolverhampton from Dudley and I got on at the Green Dragon in Upper Gornal at ten past nine. Can you imagine today’s players doing that?”

Another close friend was Fred Davies, which is just as well because perhaps it was only somewhat later that they would see the amusing side of a traumatic visit as young reserves to the FA Cup Final of 1960, when Stan Cullis’s side triumphed 3-0 over Blackburn.

“Most of the extra players went on a bus but Fred and me decided to go in my car on the Friday with our girlfriends. We broke down in Luton. The police came along and we explained who we were.

“The officer said his mate could sort it out for us and he would find us lodgings. We went to a woman’s house and she put the girls up but had no room for us. So Fred and I spent the night in one of the cells.

“The car repairs cost us about £40, which was a fortune in those days. It now had a re-conditioned engine and we went to Wembley and then back home at no more than 40mph!”

After a lot more second-team football at Molineux, it was off to Walsall, where Harris was handed the captaincy after Trevor Smith was injured.

“A knee problem finished me and I never played for anyone after that,” he added. “For 18 months, I coached the youth team but the club were not adventurous and were quite happy to stay Third Division with their modest crowds.

“It was back to the building trade for me, working for several firms including spending more than 20 years with Lewis Brothers in Wednesfield.

“Football-wise, the highlight for me at Molineux was sharing the field with Billy Wright. I was playing in the Colours v Whites pre-season game in 1959 on the day Billy retired. 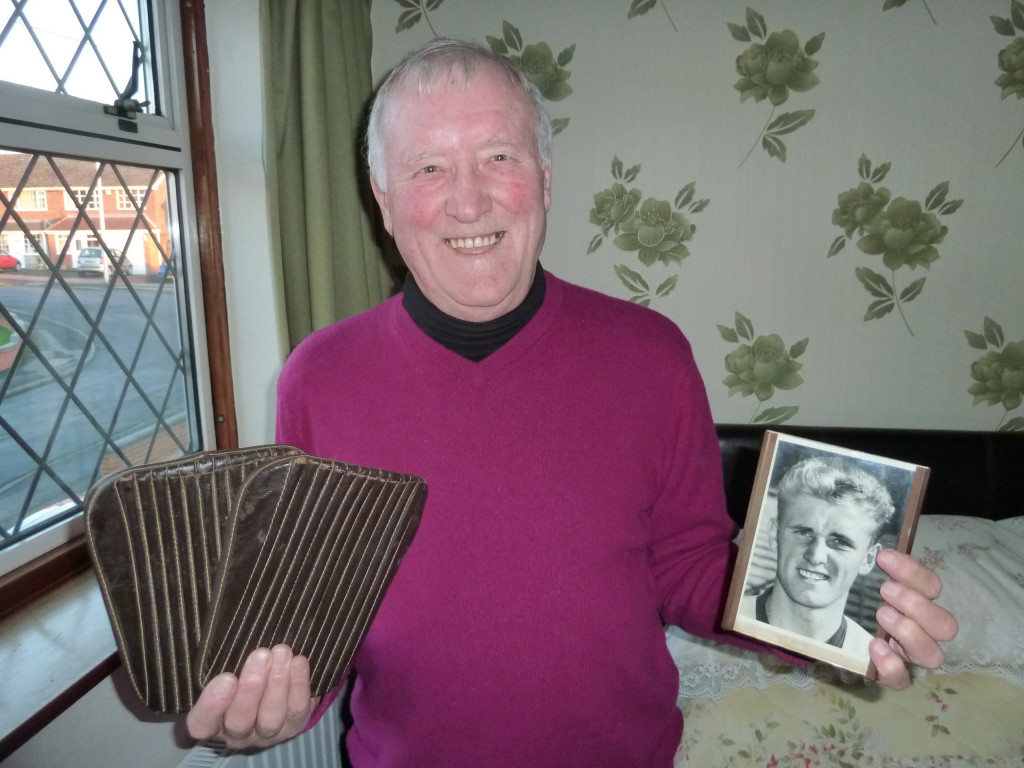 John Harris….with a reminder of how he used to be – and with the shin pads Billy Wright handed to him after the famous 1959 Colours v Whites practice match.

“Stan Cullis was a very good manager; a nice guy when calm and a great tactician, but when he’d got it on him…..

“Joe Gardiner and Jack Dowen were first-class men. They never swore – so different to today.”

Quite. Throwing millions of dollars at prima donnas does not make for characters and loyal club men like this Black Country stalwart; one born in Upper Gornal and now resident in retirement in Gornal Wood.