Witty, Worldly And Wonderful – A Life Of Giving

David Instone knew Sir Jack Hayward better than any other journalist and in 1993 became the first football correspondent from this country to go and spend time and interview him in the Bahamas. On request, we have given Wolves permission to use this tribute on their own official website as well as in the programme for Saturday’s visit of Blackpool. 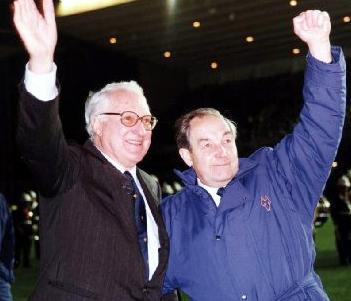 Sir Jack Hayward and his good friend Jack Harris on the night in 1993 when the opening of the stand bearing the latter’s name was marked by a nostalgic friendly against Honved.

Where do you start to pay due deference to a life like Sir Jack Hayward’s? The adjectives come gushing to mind…..colourful, patriotic, magnetic, eccentric, generous beyond comprehension and, happily, Wolves-daft.

From the moment he entered the lives of the Molineux family in the spring of 1990, we realised we had been blessed with the presence of a very special man.

He was different. In a tough, often ruthless game, he stood out as affable, enormously entertaining, even prepared on occasions to portray himself as bumbling.

During a long losing run in 1991, he watched one night match from the vast crumbling South Bank terrace to hear what the fans were saying – ‘because they know more than I do.’ He seemed surprised to be spotted and photographed in that well-worn brown raincoat and quickly found himself fielding complaints about the quality of the Bovril. The man who made it on to the list of the world’s 200 richest people revealed that he had paid to get in, although it was via the OAP gate, so he could avoid paying full price. Well, what else would you expect of someone who had confessed to having crawled under the turnstiles in his early years for a glimpse of pre-war legends like Westcott, Galley and Dorsett?

Sir Jack was closely linked with buying Wolves in 1982 and 1986 and, already club president, was a breath of fresh air when his £2.1m purchase from the Gallagher family was completed a few weeks before Steve Bull went off to Italia 90.

Following the media formalities at Molineux, he threw a party for the whole club with a lunch at Patshull Park. Pure class. His welcome, containing a line about Andy Mutch, referees and dummies, was the first of many speeches that captivated Wolverhampton audiences.

Adamant that Wolves must remain in their famous home – embarrassing and lop-sided though it had become – he set about rebuilding it rather than developing an alternative site near the M54, as many thought inevitable. The pitch was moved towards the giant but financially ruinous John Ireland Stand, in which the red seats were replaced by gold ones, and, in turn, the North Bank, main stand and South Bank were demolished to be replaced by gleaming new structures. Up they sprung, all spick and span and bearing the names of three of his heroes – Stan Cullis, Billy Wright and Jack Harris; yes, the long-time director, who was his first chairman here, was a major player in his eyes, too.

For too long, the team lagged behind the splendour of their surroundings. Barnsley, to the pain of everyone here in 1996-97, made it to the Premier League before Wolves did. So, in front of our very eyes in 1998-99, did Bradford.

Sir Jack, whose long-stated dying wish had been to see a Wolverhampton-born lad lift the FA Cup in its gold and black ribbons at Wembley, found it in himself to congratulate those less fancied clubs on ‘discovering a key to promotion that we haven’t yet managed.’ Such class. 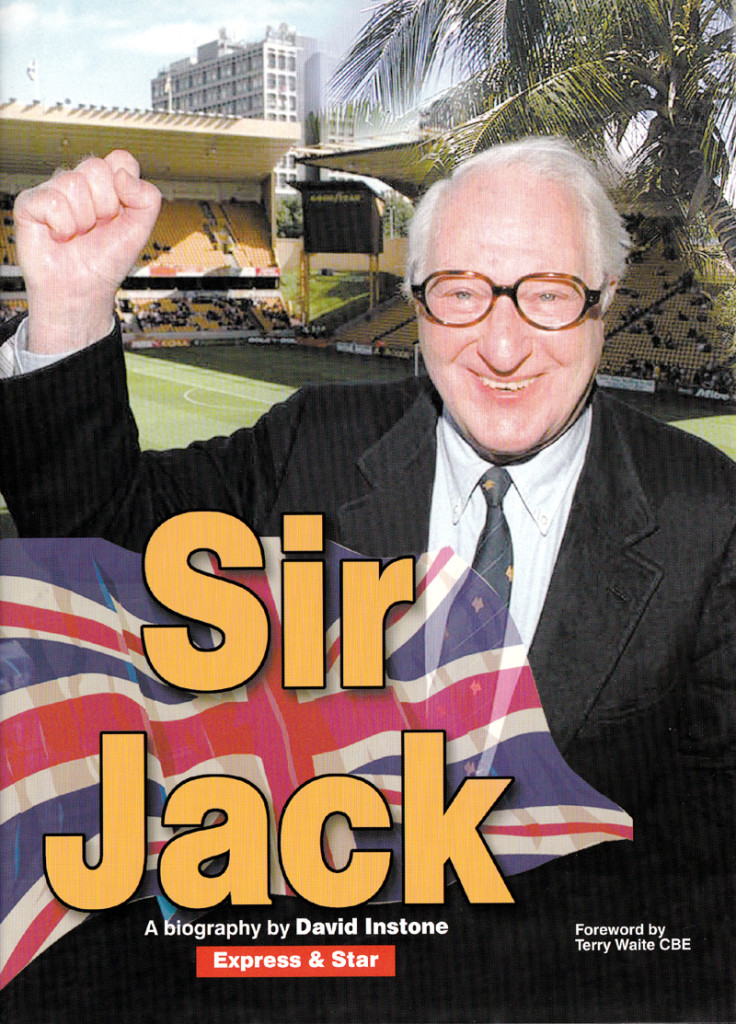 I had by this time seen quite enough of him; enough, that is, to convince me that this wonderful life of giving should be properly celebrated in print. “Never kept a diary and too many skeletons in the cupboard, old boy,” was his dismissive response to the idea of a book. The brush-off caused only a temporary delay.

Thanks partly to the information gleaned from two self-funded research trips to the Bahamas – okay, they started off as self-funded but he became a wonderful, benevolent chaperon on the first one – we rattled on with the story anyway and brought him in on it during the last year or so, thus making it an approved biography. Judging by the copies he bought in the club shop as give-aways for new friends met on cruises, he considered the exercise to have been worthwhile.

We all knew him as a Wolves fanatic, owner and later chairman, spending sprees, ‘golden tit’ outburst and all. But there was a very full life beyond WV1 to portray as well.

Brought up less than a mile from the ground in Whitmore Reans, he was born into a certain wealth. His father Sir Charles, who himself lived to 90, made a fortune of his own that Sir Jack multiplied many times over. The only son didn’t play golf and couldn’t stand the thought of retirement, so he just kept working – and giving.

We can only scrape the surface here in listing the causes the family name is attached to locally, nationally and internationally but ‘Union Jack’ loved great patriotic deeds sufficiently to buy Lundy Island and so keep it out of American hands, to bring home the decaying SS Great Britain after 37 years of wallowing in the South Atlantic, to sponsor the England women’s cricket team (something that cemented a friendship with the Heyhoe-Flint family that is now decades old), to back Chay Blyth on his victorious Whitbread Round The World Yacht Race adventure and to rebuild a hospital in the Falklands that was destroyed during the Argentine invasion.

The publicity surrounding the recent death of Jeremy Thorpe also reminded us how Sir Jack had been shamefully treated by the former Liberal leader in return for giving him financial assistance; a donation not necessarily made out of any political alliance but because he loved championing the efforts of an underdog, especially a party he thought attracted votes only from ‘little old ladies in Budleigh Salterton and Cheltenham Spa.’ Was anyone ever more quotable to the Express & Star?

Closer to home, there was ‘the gambling nun’ story, namely the tale of how headmistress Sister Helen Watson stood on stage in front of 400 pupils and parents at St Dominic’s Girls’ School in Brewood and met the challenge of successfully reciting the Wembley line-up Sir Jack had seen in the flesh when Wolves surprisingly lost the 1939 FA Cup final to Portsmouth. With a double-or-quits subsidiary question mischievously thrown in by her and a supposedly startled response from the philanthropist about gambling dens, another cheque was cheerfully written, this time for £62,000.

Not surprisingly, a 1986 knighthood followed the awarding of an OBE but the proudest day of his life, other than when he gained his ‘wings’ in the RAF, came with the victory over Sheffield United at the Millennium Stadium in 2003. Generally so tortured by doubt that he confessed to never being able to enjoy matches unless Wolves were four up with two minutes to go, he decided the 3-0 lead was sufficient this time as he produced a double thumbs-up and a beaming smile for the TV cameras in the game’s final stages.

Who knows how many tens of millions he threw at trying to get the club to and established in the top flight? Enough to have him firmly installed as what the highly respected Daily Telegraph correspondent Henry Winter  referred to in his match report from Molineux on Tuesday night as ‘one of the game’s greatest owner-benefactors and one who never asked for anything in return.’

Despite those stories of best china and afternoon tea always being taken at 4pm, he was, contrastingly, forever one for putting himself on the line. As a Stowe School pupil, he cycled 17 miles to Oxford to the nearest recruitment office on the day war broke out and lied about his age in an attempt to be conscripted to do his bit for King and Country. His sense of daring all but cost him his life in a ‘death dive’ while on active duty in India at the age of 21 and a piece of high jinks (or should that be low jinks?) once saw him flying a Tiger Moth at an altitude of five feet through a hangar.

He talked, when political correctness wasn’t such an issue, of loving to see more and more pink (British Empire) bits on the world map. His banning of foreign cars on the estate of his Sussex mansion is legendary and he preferred his footballers to have names like Cullis, Slater and Wright rather than ‘all these Vieiras, Viallis and Viagras’.

Visitors to Grand Bahama Island were consequently greeted by the sight of red pillar boxes and telephone kiosks and, in one particularly remote corner, a row of London buses.

Sir Jack had longed to see Wolves rubbing shoulders again with the elite and, once they were there, realised it needed a younger, even wealthier individual to take the reins from him. His legacy, beyond a magnificent training ground, a stadium to be proud of and a status of enduring respectability, was to vet the candidates, rebuff at least one interested party and select the right man.

He was all for handing the club over for nothing to anyone who could convince him they could inject £30m into the squad – then he characteristically decided it would be a shame not to have something to frame and hang on the wall as a souvenir, so he made great play of saying he had actually asked a tenner for it. Pure class. 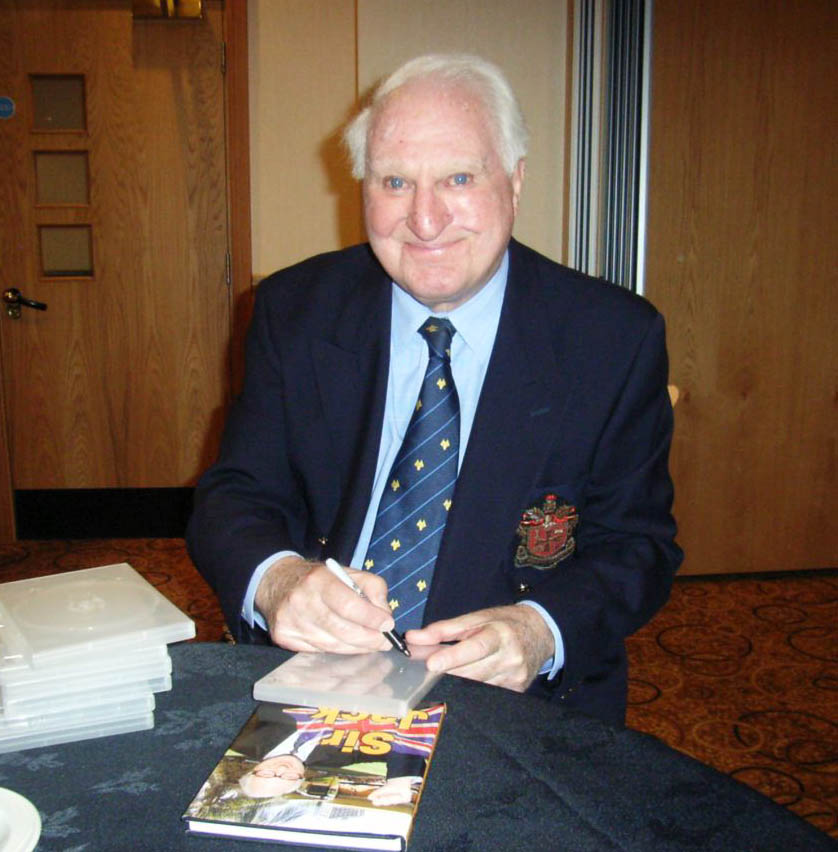 A warm smile we shall never forget…..

No interviewee in my near 30-year attachment at Molineux has been more charismatic or more fun to talk to or listen to. No-one from Wolverhampton Wanderers in the last half a century has made press conferences so worth attending or lit up so many rooms just by walking into them. Royalty or regular fan, he could judge the mood of an occasion to a tee. Hosting The Queen for lunch at his shore-side home in the sun and at Molineux, or chatting with anxious supporters, he pitched it just right. He had a rare gift.

Sir Jack Hayward built statues to two of his icons and gave one of them, the man he called ‘England’s finest footballer and gentleman,’ a wonderful last lease of life in the shape of four years on his first Molineux board.

We have been told this week how he himself wrote ‘Glad to have been able to help’ in the visitors’ book at the wonderful Molineux Museum. At other times, he has said he would like his epitaph to read: ‘Jack Hayward; took his first few breaths in Wolverhampton and did his best to repay his debt to the town.’ Utter class.