A Sad Day – But Also One Of Celebration

Toasting A Life Of Giving And Sharing

Molineux did Sir Jack Hayward proud before, during and after yesterday’s Championship victory over Blackpool as the Wolverhampton Wanderers family came together to celebrate a life lived with great vigour and panache right to the end.

Rather than repeat the sort of text that has been written elsewhere in the last 24 hours, we thought we would list ten of the features that made Saturday, January 17 a memorable day – and ten more of the ‘Sir Jackisms’ that perhaps haven’t had much exposure since his passing-away on Tuesday.

Reasons why we won’t forget yesterday in a hurry: 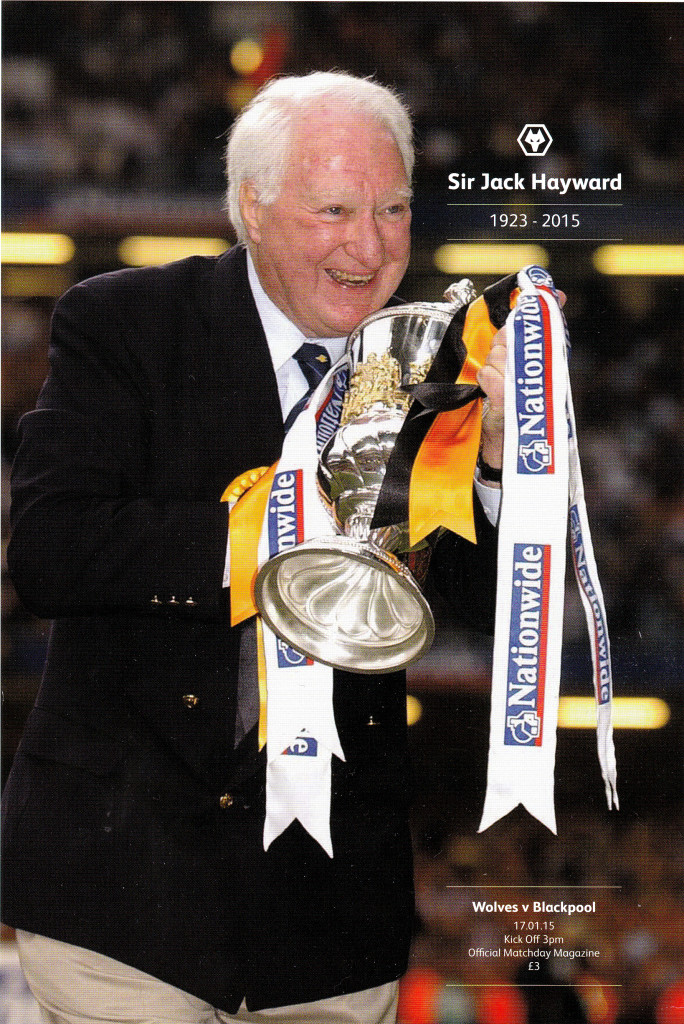 2. Another visit back by Jonathan Hayward and Sir Jack’s long-time companion Patti Bloom and members of her family.

3. Hearing that a terrific programme had sold out, with plans for a possible re-print immediately announced.

4. The releasing of those 2,000 gold and black balloons just before kick-off.

5. And the holding-up of cards in the Steve Bull Stand, so the name ‘Sir Jack’ was spelled either side of a wolf’s head. Quality!

6. The frequent rendition of old chants like ‘Jack Hayward’s Barmy Army’ and ‘There’s Only One Jack Hayward’.

9. The two goals in the final few minutes that turned a likely 0-0 draw into a 2-0 Wolves victory.

10. The PA announcer shouting at the final whistle: ‘That win was for you, Sir Jack’.

And some of the quirky reasons why we will NEVER forget Sir Jack:

1. For saying he would come back and haunt the club if Molineux was ever renamed after him.

2. For standing outside the ladies’ toilets ‘like a voyeur in a raincoat’ when concerned by reports of the queues pre-match and at half-time.

3. For bringing Billy Wright back into the fold during the twilight of his life.

4. For doing as much as he did to support Wolves’ Former Players Association by financing dinners etc.

5. For always making such a fuss of young players at the club and daring to dream that more Billys would be produced in future.

6. For insisting that the rebuilding of Molineux in the early 1990s be carried out entirely by a local workforce and with locally sourced materials. He didn’t even like Michelin tyres being on the team coach!

7. For inviting a group of Wolves fans into his office for a drink and a chat when they sailed from Florida to turn up, unannounced, at the Grand Bahama Port Authority to see where he worked. 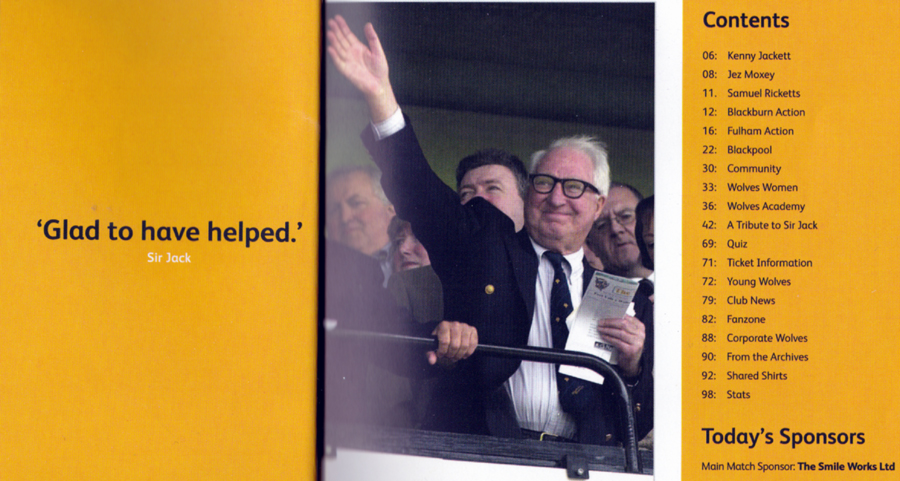 Pages four and five of the match-day magazine, with the contents revealing almost 30 other pages of tribute.

8. For welcoming train stewardess Teresa Woodward and her husband into the directors’ box after hearing on a journey up from Euston that she had been unable to get tickets for a League Cup game at home to Nottingham Forest.

9. For struggling to the FA Cup semi-final against Arsenal at Villa Park in 1998, only 18 days after undergoing triple heart by-pass surgery in Los Angeles, where he knew the consultant and ‘could therefore get a discount’. And for insisting he be at Molineux first to wave all the supporters’ coaches off.

10. For portraying everything good about Wolves and Wolverhampton for many, many decades.