An Adventure In The Backwaters That Might Have Turned Difficult 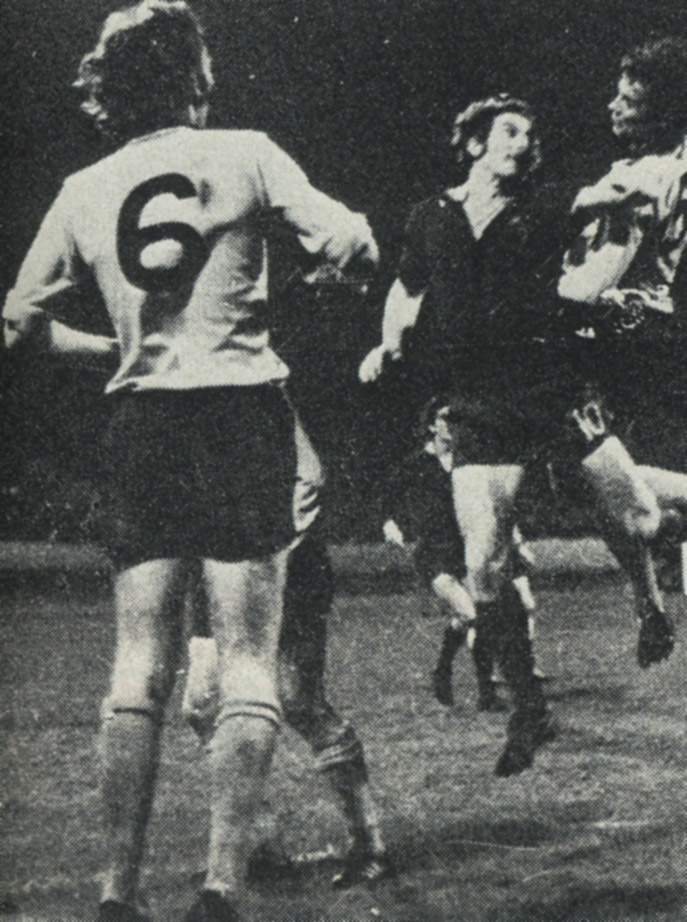 John McAlle and a leaping Frank Munro are stretched by the underdogs’ threat on Wolves’ League Cup visit to Halifax more than 40 years ago.

What ended in glory at Wembley almost five months later started for Wolves in early October of 1974 at another stadium with a race track round it.

Halifax’s humble home, The Shay, was one of those earthy venues high on curiosity value for followers of such long-time occupants of the top flight. After all, Wolves had played there only once previously – in a Third Division North fixture in 1923-24.

And, at the start of the club’s historic 1973-74 League Cup run, an autumn evening in these bowl-like surroundings fell into the ‘potential banana skin’ category.

Wolves, narrowly beaten by Tottenham in the League Cup semi-finals the previous season, were not in great form when handed a trip to West Yorkshire as their opening assignment in the competition.

A seven-match run of League games without a victory was fresh in their minds, albeit one ended with a 2-1 home win over a relegation-bound Manchester United two days before the Monday night meeting with Halifax.

“We thought we might just be able to give them a scare,” said the former Molineux youngster Fred Kemp, by now the Shaymen’s driving force at wing-half as well as their record signing from when he moved for £13,500 from Blackpool in 1971.

“We knew what a talented line-up they had but we just hoped we could catch them on one of those nights when everything might go right for us.

“Going to Halifax was a bit of an experience for some of the bigger players. It wasn’t the best of grounds and our gates were poor – well down on what the speedway team attracted for their fixtures in the same stadium.

“More than once, we played in front of about 3,000 on the Saturday afternoon and plenty more would go through the turnstiles a couple of hours later for a race meeting.”

When Wolves went there, Halifax’s 2-0 Division Three home victory over Chesterfield on the previous Saturday had brought in fewer than 3,000. A League Cup gate of 8,222 was therefore very good news for the coffers of a club who had beaten Manchester United in the Watney Cup two and a bit years earlier.

Great sadness though there is that Phil Parkes played in every round of the victorious League Cup run except the final, it is accurate to record that he lined up at The Shay only because Gary Pierce, who was the man in possession of the jersey having played the previous six matches, was suffering from flu.

Derek Parkin (leg) and Kenny Hibbitt (back) were ruled out by injury, so Geoff Palmer went in for only the second of his colossal haul of 496 Wanderers appearances and Alan Sunderland had a recall in the county of his birth.

Victory ultimately came comfortably enough to Bill McGarry’s men but there was frustration, relief even, along the way.

Sunderland opening the scoring in the 37th minute with a lob from Parkes’s long kick but there was the potential for a completely different chain of events in Wolves’ mid-1970s history when Gerry Taylor was adjudged to have fouled Alan Jones in the area six minutes after half-time. Kemp, of all people, took the kick but dragged his shot against the outside of the post.

The tie began to look safe when Derek Dougan rifled in the second and John Richards, having been denied several times by the heroics of keeper Alex Smith, wrapped up a straightforward-looking 3-0 success eight minutes from the end with his first goal in England since the FA Cup third-place triumph at Arsenal in mid-August.

The striker, destined to etch his name in the club’s history by netting at Wembley later that season, had been among the marksmen in the UEFA Cup victory away to Belenenses in the meantime – a night on which a show of retaliation earned him the first sending-off of his career. But he had gone ten League games without a goal.

The day after the Halifax game, with the drought over, the co-owner of this website was named by Sir Alf Ramsey in the England under-23 squad to face Poland at Plymouth.

“We were well beaten by Wolves in the end,” added Italian-born Kemp, who had made four senior appearances for his first club, all in their 1964-65 relegation season.

How the Halifax Courier portrayed the penalty miss – but isn’t the referee a bit too close?

“It might have been different if I had scored from the penalty, who knows? I went off to Hereford the following summer and then on to South Africa, so I don’t recall being around to get much stick from the Wolves lads.

“Lofty had been at Molineux as a lad when I had my run in the first team and I played a couple of League games with Dave Wagstaffe. I certainly think they were kind in going quite easy on me!”

* Kemp made 124 appearances for Halifax and scored 11 goals.