Farewell To A Hero

Thousands Turn Out In Tribute 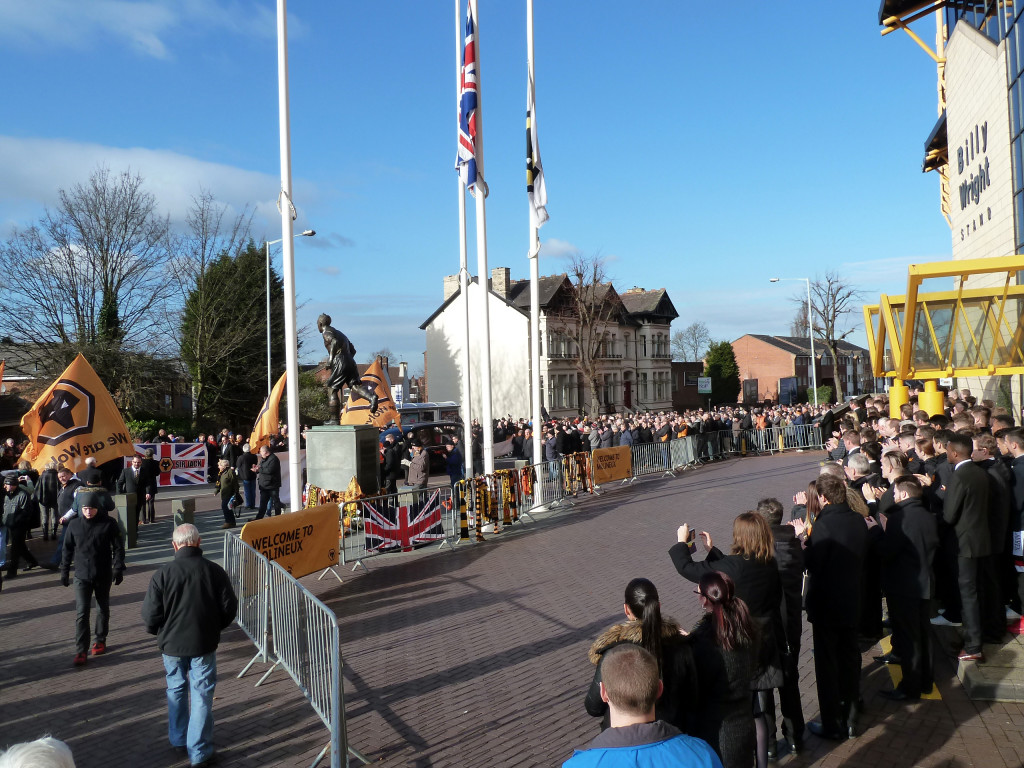 A picture of respect and pride as the cortege heads for the city centre.

It was 90 minutes. It had to be. The man who gave his beloved club a spectacular Molineux, a first taste of the Premier League, long-term stability and respectability and a million memories had a send-off that lasted – in church time at least – as long as one of the matches he nervously sat through.

Wolverhampton Wanderers have become accustomed to ‘doing’ events like this rather well and, as much as they have been praised for their sensitive response to the news we fear of any nonagenarian, were under a certain pressure to get this one right.

When Sir Jack Hayward’s great football hero Billy Wright died in 1994, he held up the cortege on the way to St Peter’s to thank each and every one of the drivers. Even in observing all the correct protocol, there was room for the human touch.

Following the passing-away of Princess Diana three years later, he avidly watched the funeral coverage on one channel and recorded that on the other so he could watch it later. Not only was he an arch-royalist and patriot, he was a slave to detail and style – and was delighted to report that the TV companies handled the occasion beautifully.

Sir Jack, we were informed in the Baroness Heyhoe Flint’s outstanding eulogy today, has never opened a lap-top or owned a mobile phone. But this whole afternoon was a ‘selfie’ of sorts.

In case we hadn’t already guessed – and legacy has always been a very important concept to him, after all – he planned his own memorable send-off, the back page of the order of service revealing that it had been ‘composed with great thought and detail’ by him. 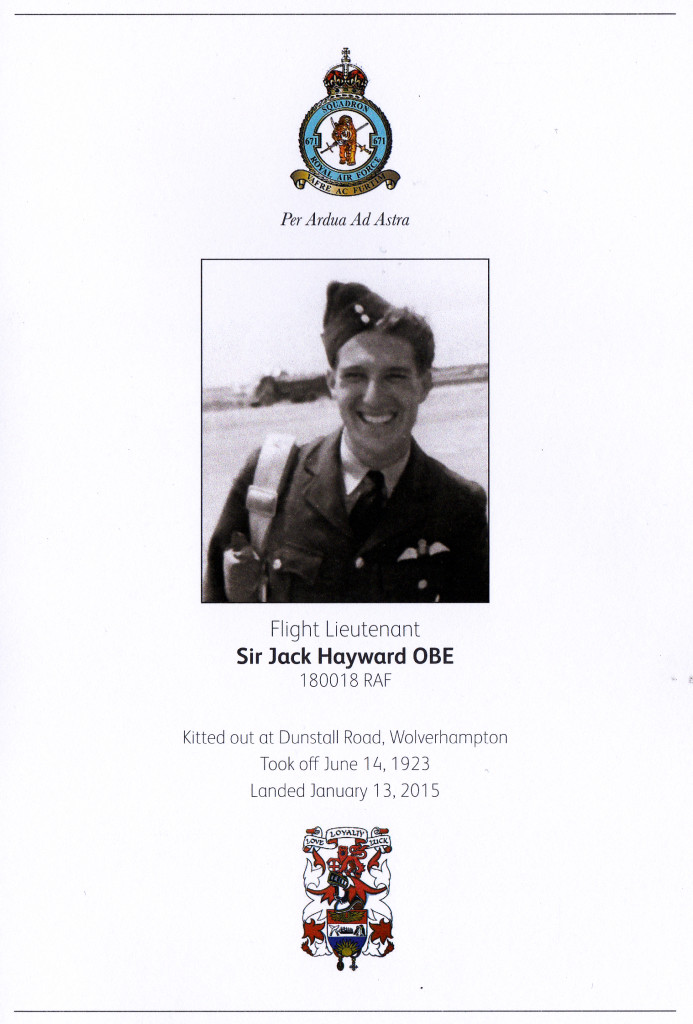 ‘Took off June 14, 1923. Landed January 13, 2015.’ A characteristic touch for the front cover of the order of service. Please try clicking on image to enlarge it.

There were tell-tale signs within of his life and loves; a lunchtime helicopter fly-past and then six sets of sturdy RAF shoulders to carry a coffin draped in the Union Jack.

Elgar’s well-known love of Wolves made ‘Nimrod’ a safe bet as the exit music, ‘Jerusalem’ was always likely to be chosen and sung with gusto and, from a large choir whose members each wore a gold and black rosette bearing the words ‘Thumbs Up For Sir Jack’, Mary Harrow was plucked for a delightful rendition of ‘The White Cliffs Of Dover’ as a nod to forces’ sweetheart Dame Vera Lynn, one of the star turns at Hayward’s 70th birthday party celebrations in a London hotel.

America, where he carried out his flight training and with whom he did so much business, were recognised with the singing of ‘The Battle Hymn Of The Republic’…..in fact, the whole service, conducted by Wolves chaplain, the Reverend David Wright, had his fingerprints on it.

“I have known him for 45 years and he would not want us to be miserable,” said the Baroness Heyhoe Flint OBE. “Parting is hell but life goes on, so sing as well.

“He reminds me of a naughty schoolboy, a daredevil. What’s the point of being like that and not being noticed? He wanted to be caught!

“He was not academically-minded but he did all right, didn’t he?”

We were reminded of Sir Jack’s desire to keep everything ‘bright, British and beautiful’ by tales of how, while looking out across Molineux early one morning when he was in his white dressing gown, he was horrified to see a banner advert for foreign cars. “I have never seen the stadium manager move so fast,” Rachael said. Another time, Hayward was furious to hear Beethoven playing while he waited to be put through on a call and ordered that the tape be ripped out immediately and replaced by something from Elgar. He even had someone check the country of origin of the tyres on the Queen’s car during her 1994 visit to open the redeveloped Molineux.

They hung on every word as Jez Moxey and brothers Rick and Jonathan Hayward took their turn with readings either side of some personal recollections from Robert Plant, who spoke of a man of impressive spirit who ‘had kindness and humour’ and was ‘candid and dauntless.’ And of his love for ‘Jack’s Castle on Waterloo Road.’ Reverend Wright’s predecessor, Reverend Prebendary John Hall-Matthews, gave an enlightening eulogy of his own which underlined the close relationship between the club and this magnificent building. 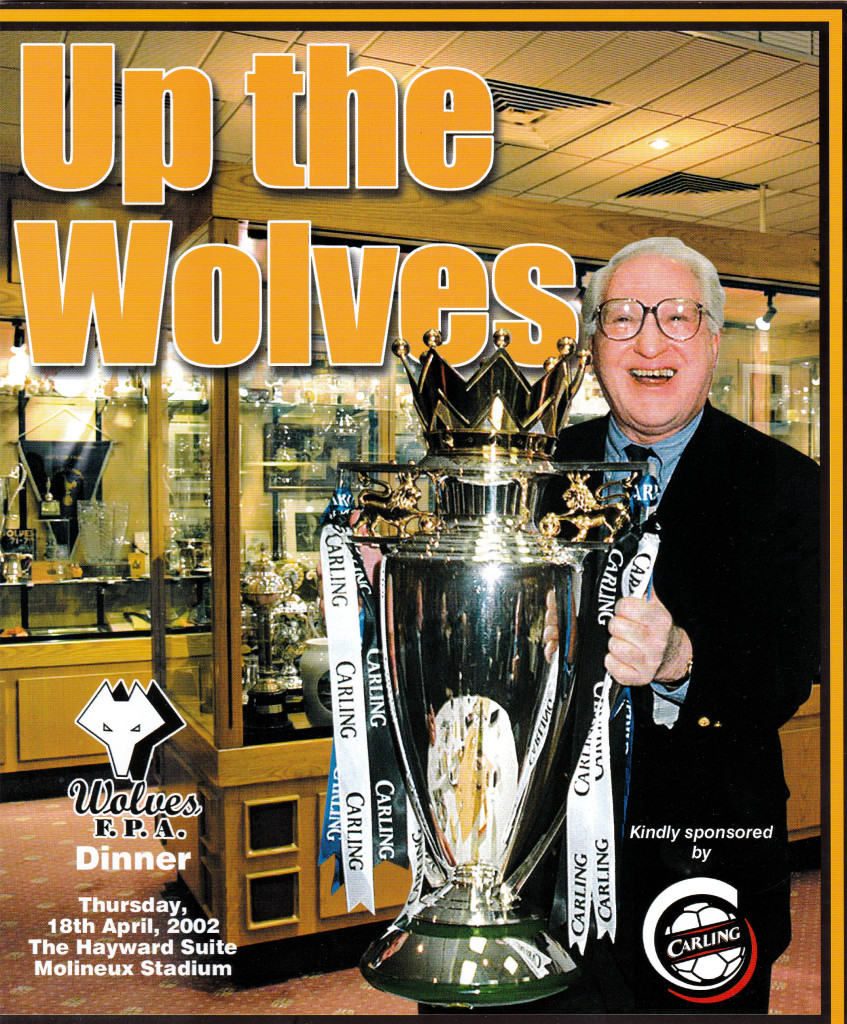 How we will remember him for his beaming smile and support.

Much though we dread these occasions coming along, it was one not to be missed, whether watched close up in a packed St Peter’s, among a crowd of thousands in front of the big screen in Queen Square or acknowledged by polite applause inside or outside the stadium as the cortege advanced respectfully on this, the last of his countless journeys.

It was all done with great style. It had to be. Anything less would have been a gross dereliction of the collective duty to bestow upon Sir Jack Hayward some of the enormous consideration he extended to others.

And, when it was over, we took tea at 4pm in the Hayward Suite. He obviously insisted on that as well.