Oops……The One That Got Through! 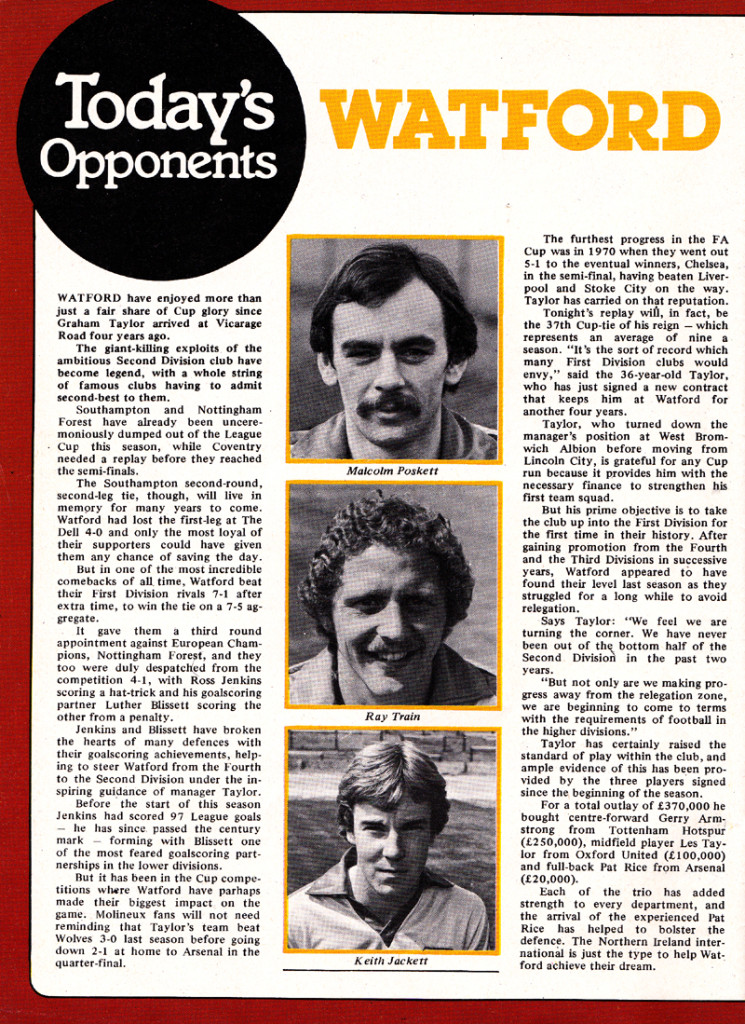 Kenny Jackett’s feat in leading Wolves to a record-busting League One triumph last season and to a position of challenging for a place in the play-offs this term has cemented his standing in Molineux history.

But, as this photograph on the right shows, he clearly was not always a household name around Wolverhampton.

The image is taken from the programme for an FA Cup fourth-round replay in January, 1981, when the then teenage Jackett was an up-and-coming midfielder with that night’s visitors to Molineux, Watford.

Maybe it was his fledgling status in Graham Taylor’s squad that resulted in what would, if made now, be a highly embarrassing error.

If you haven’t already spotted it, he is referred to as ‘Keith Jackett’ in the caption beneath his photo on the visitors’ pages.

John Barnwell’s side were doughty fighters at the time, especially in knock-out football, and beat the Hertfordshire upstarts 2-1 after a 1-1 draw at Vicarage Road three days earlier – a game in which we have already shown a photo of Jackett in the Hornets ranks.

They went on to reach the semi-final before losing to Tottenham, having the previous season won the League Cup by defeating Nottingham Forest against all the odds at Wembley at the end of a marathon 11-game journey.

Maybe, though, the match-day programme, mistake and all, was a sign of the financial difficulties Wolves were starting to experience because it was a huge backward step on the one that had come into being more than a decade earlier soon after the club’s return to the top flight.

The publication cost 30p for the Watford replay, which was won by goals from John Richards and Derek Parkin, and contained some safe short cuts as well as some managerial insight.

It had the rather ‘easy’ front cover of a large picture of the FA Cup – something that would hardly have fans reaching into their pockets these days – while Barnwell was talking inside of being relaxed about a replay being needed against the Second Division side.

He pointed out that the win over Stoke in the third round had also come at the second attempt and had kickstarted an upturn also containing a 3-0 home win over Middlesbrough and a 0-0 draw at Crystal Palace.

“We don’t mind this at all,” he wrote. “Our last replay was the signal for us to start our revival and I have been exceptionally pleased with our displays ever since. Everybody at Molineux enjoys playing in the sudden-death atmosphere of the competition.”

In welcoming Watford, he added: “Graham Taylor is an old friend. He is not just building a team at Vicarage Road. He is helping to build a club.”

Turn on a little and there is more evidence that it wasn’t the matchday magazine’s finest hour. It had a 24-page Programme Plus section that contained no Molineux content whatever and that left only 16 pages of Wolves material. You could get the whole season’s programmes on subscription for £11. 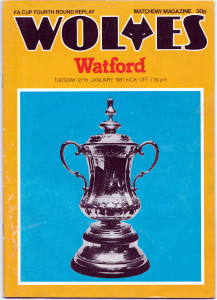 The front cover from 34 years ago.

While Watford went away narrowly beaten on a ground at which they had won 3-0 in the fifth round of the competition the previous season, Barnwell’s men were to progress through another two rounds.

They overcame Wrexham 3-1 at home at the last-16 stage and then needed yet another replay before knocking out Middlesbrough, the 3-1 win bringing Molineux its last 40,000-plus attendance.

The semi against Tottenham also brought two games, with the controversial 2-2 draw at Hillsborough being followed by a 3-0 Spurs win just down the road from their North London home at Highbury.