How the Sporting Star portrayed the tribute to Sir Winston.

Monday, February 2: Have enjoyed reading the write-ups marking Saturday’s 50th anniversary of Sir Winston Churchill’s burial – and recalling that the first State funeral accorded to a non-Royal for over half a century was held on a Wolves home match day. As a kid, I have vivid memories of seeing that night’s Sporting Star, complete with a photo of Wolves and Rotherham players lining up in black armbands for a minute’s silence prior to their FA Cup clash at Molineux. No thoughts of commemorating such an occasion in those days with a round of applause!

Tuesday, February 3: Wolverhampton had another major funeral of its own with the quite wonderful tribute today to Sir Jack Hayward. Send-offs like this inevitably cause sadness but great pride also – and I was flattered to be asked to make a short appearance at the microphone with Paul Franks, who was presenting his BBC WM teatime show from the Molineux press room. A few minutes later, I also watched at Fiona and Jonathan Hayward’s side a floor lower as Central and Midlands Today each served up excellent programmes centred on his life, times and final journey.

Tuesday, February 10: Have been having some email conversation, in advance of a possible Skype chat, with the brother of one of Wolves’ earliest foreign imports. News of the recent death of Tommy McMullan in his native South Africa at the age of 74 was kindly relayed to us by his brother Brian, who has consequently been spending time in Durban, although he lives in America. We gave a mention to Tommy in this piece about Alan Ball’s brief Molineux involvement  https://www.wolvesheroes.com/2011/09/23/costly-discarding-of-world-cup-winner/

Friday, February 13: Another link from yesteryear…..we have been receiving some emails about a Reginald John Kirkham from Plymouth fan and website man Andrew Chapman, who was keen to know whether we could add anything about the former Argyle player from his time at Molineux between August, 1937, and October, 1938. Hopefully, we have filled in one or two gaps for him.

Saturday, February 14: It’s always interesting to look through the line-ups of clubs in non-Wolves games and spot Molineux connections. I am indebted to Coventry historian Jim Brown for pointing out that the Arsenal side for the first leg of their FA Youth Cup final victory over the Sky Blues in May, 2000, contained three players who were destined to play for Wolves, with another sidelined through injury. The Gunners were represented by: GRAHAM STACK, Israel da Silva, Nicolo Galli, Liam Chilvers, John Halls, Steve Sidwell, ROHAN RICKETTS, David Noble, Jerome Thomas, JAY BOTHROYD, Graham Barrett. Most significant of their absentees was JERMAINE PENNANT.

Tuesday, February 24: Had the company of a rare log-jam of former Wolves players at tonight’s home victory against Fulham. As well as the usual suspects in the press box, such as Andy Thompson and Paul Jones, we welcomed back Robbie Dennison on commentary duty alongside Bill Hatton in what was described as a ‘one-off return’. And, in the seats nearby, were Keith Downing and Everton scout Jim Barron, who had a half-time chat with one another. 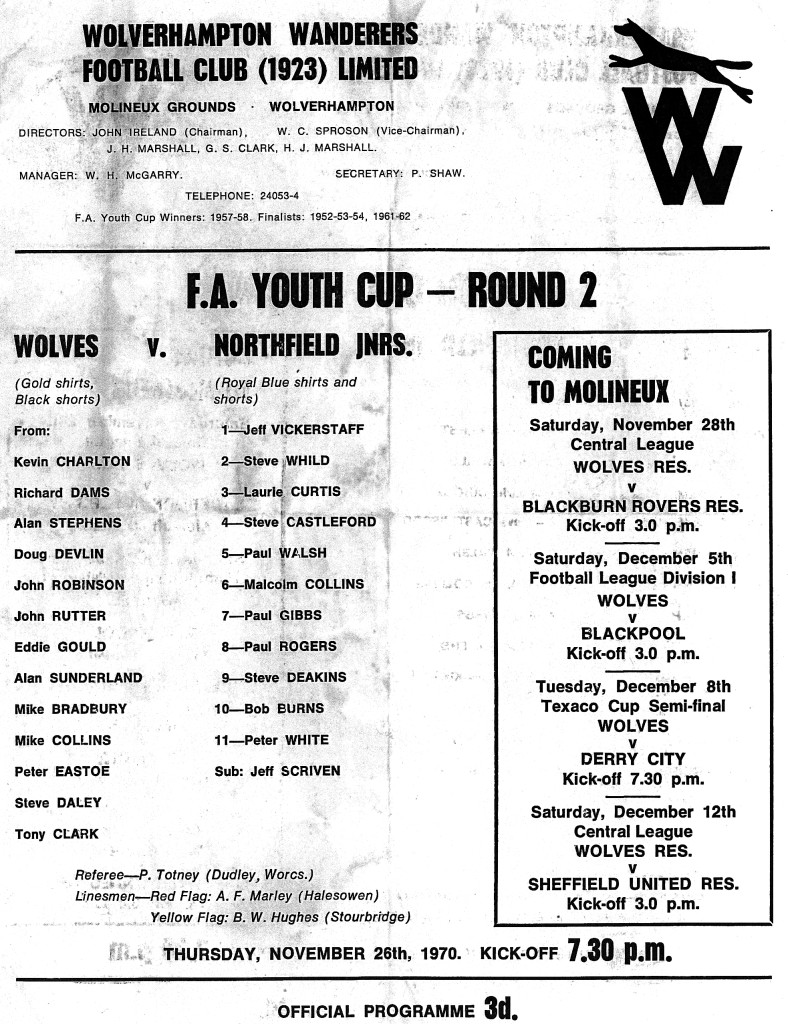 Thursday, February 26: Back on a Youth Cup theme, we were sent a request out of the blue from a member of the Northfield Juniors team who were well beaten in a second-round tie at Molineux on November 26, 1970. Paul Gibbs wore no 7 for the visitors that night in a 7-0 defeat and said in an email he signed off ‘yours in hope’: “Wolves had three players who went on to have great first-team careers, Alan Sunderland, Steve Daley and Peter Eastoe. Also playing was a young lad called John Rutter. Here comes the long shot……..I used to have the programme and wondered whether your archives might cover anything like that as I lost it when moving house.” Well, Paul is in luck. Thanks to Molineux programme editor John Hendley, we have photo-copied what was the single-sheet official publication (price 3d) and have it ready to send him.

Saturday, February 28: Ten minutes in the company of former Wolves chief scout Dave Merrington is always enlightening and he was in good form today at The Hawthorns, where he was summarising, as usual, on Southampton’s game for Radio Solent. Merrington enjoyed flicking through the Burnley nostalgia book I had for him to sign and also put his autograph on a weighty Saints publication, having had a spell as manager at The Dell before Dave Jones, Glenn Hoddle and Stuart Gray.