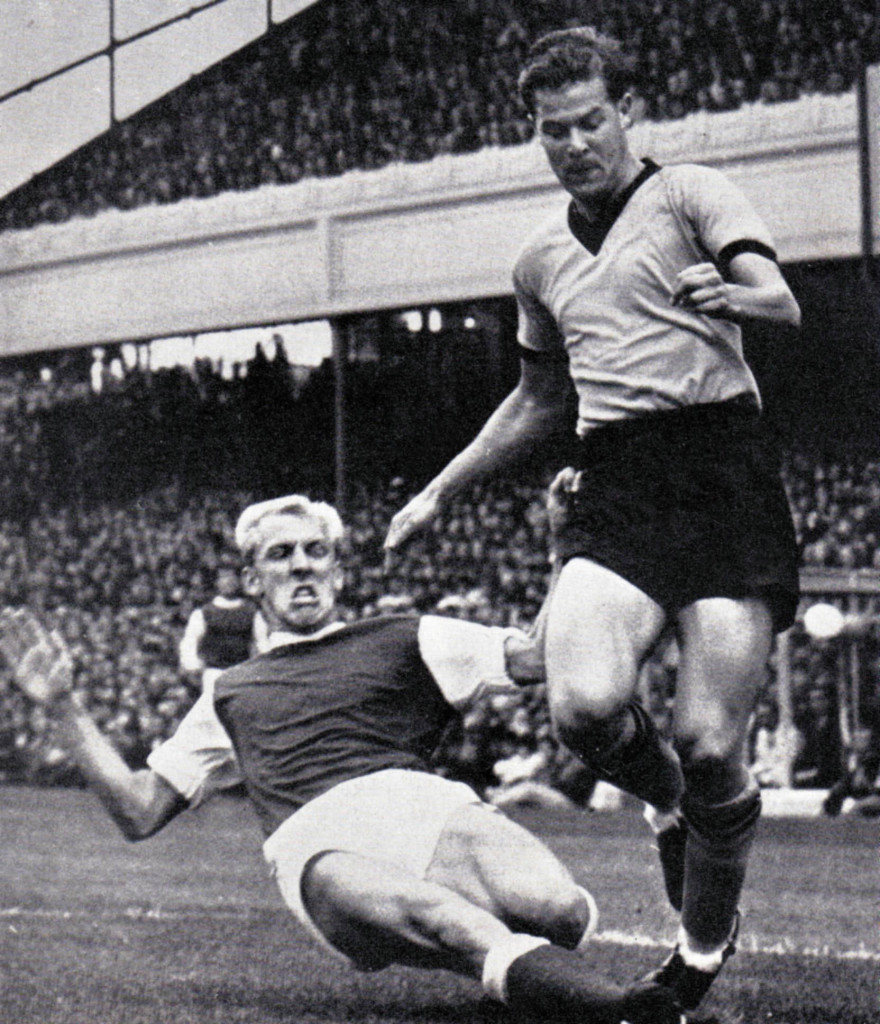 Ted Farmer is tackled by Ian Ure during his appearance against Billy Wright’s Arsenal on the opening day of 1963-64.

Wolves Heroes are booked in for a visit to see Ted Farmer at his Bridgnorth home on Thursday. We will also be present in the previous few hours at a players’ charity golf day at nearby Astbury Hall.

Ted tells us that his local rugby club recently secured a return trip to Twickenham and regrets the fact that he doesn’t see one of his long-time friends Gerry Harris, who is not far away in Claverley, out and about much any more. Clearly, he shows a keen interest in what is going on around him in a town to which he moved from Wombourne almost three years ago.

Steve Bull is one of those down to play in the Breakthrough Breast Cancer event in three days’ time. I have more than once referred to Farmer as a yesteryear Bully and the ravenous hunger they shared for scoring as Wolves no 9s goes some way to justifying the tag.

It is fanciful to wonder, given that one ended with 44 goals for the club and the other with 306, how much closer their final totals might have been had fate not played a part. But older supporters probably wonder nonetheless.

Farmer’s tally came in only 62 games at the rate of one every 1.40 games. Bully’s were spread out across 561 appearances at an average of one per every 1.83 matches.

Ted’s all came in the top flight – he didn’t score in the FA Cup or European ties he played – and his arrival at first-team level must have been quite an explosion.

He scored twice in a win at Manchester United on his debut in September, 1960. He netted two against Cardiff in his second home game and did the same against Nottingham Forest, Burnley and Fulham before November was out.

A writer in the Molineux match-day programme, having noted what occured at Craven Cottage, said it was time the young Farmer converted one of his braces into hat-tricks. A week after Fulham, at home to an Arsenal side containing future Wolves managers Tommy Docherty and John Barnwell, he did just that.

He had 15 goals to his credit from 11 games and would go one better when slamming four past Birmingham in March. At the age of 20 and fresh to the team, he was a sensation with his 28 goals from 27 appearances that season.

Now we shouldn’t forget that, on two occasions, Bully netted more than twice as many goals in a season as the number of years he had spent on this planet (52 in 1987-88 when he was 22, turning 23) and 50 the following season when he was 23, turning 24). That’s not a boast too many strikers can make.

Nor should we overlook the fact that Farmer would have needed 11 years of the sort of seasonal tally he managed in 1960-61 to eclipse the famous, never-to-be-beaten, unbelievable haul of 306 Wolves goals amassed by one of his successors in the shirt.

But it is quite feasible, surely, to assume Ted might have been the club’s record marksman at some point had he not been so cruelly chopped down by injury.

At the time, Billy Hartill was leading the way with 170 and remained out in front until Wolves Heroes co-owner John Richards went past him.

But how many might Farmer have managed with a cleaner bill of health, especially if he had spent those two mid-1960s seasons in the Second Division where marking was more lax and openings more plentiful?

Fifty years ago, the four-goal hero of the infamous 1958 FA Youth Cup final comeback against Chelsea was including Bridgnorth on the 12-mile cycling circuit he was sent on from Patshull Rehabilitation Centre following major knee surgery at Wolverhampton’s Queen Victoria Hospital.

He knew it was improbable that he would make a full recovery but, boy, he gave it every chance. He made it back as far as the pre-season photograph in 1965 and, a few weeks later, into a Birmingham League match against Bromsgrove at Castlecroft alongside an emerging Bob Hatton.

There were lighter moments, too, such as when he made a routine visit to see the club’s trusted consultant Mr Freeman in Waterloo Road. Ernie Hunt was there at the same time, ready for his medical as he signed from Swindon, and fell off his chair as he fainted, white-faced, at the sight of yet another needle going into Ted’s left knee.

Farmer played a second comeback match, this time for the third team against Walsall Reserves at Castlecroft. All was well until an injury to young Wolves wing-half Terry Thompson increased his workload with costly consequences.

Ted’s  1987 autobiography The Heartbreak Game tells the sad story of how his joint filled again with fluid and Mr Freeman soon recommended the inevitable; that the fight be written off as lost. 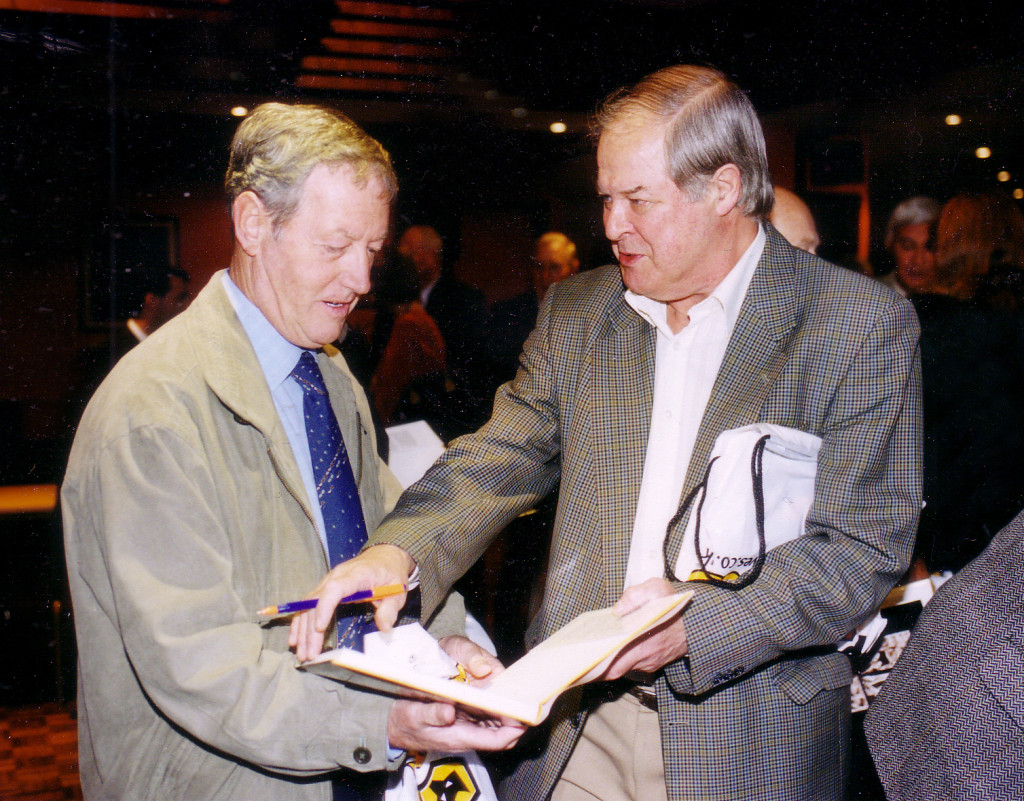 Farmer was a day short of his birthday when, in January, 1966, he gave a press conference explaining his decision to quit. He was 25.

He even had to re-apply for his amateur status when he played an odd game in the Dudley and Cradley Heath League for The Lamp Tavern, the pub he subsequently took on. Wolves, knowing he had years left of what would be regarded as a normal career span and thinking there might be some medical breakthrough, retained his registration for some time.

There was no magical salvation. That, indeed, was journey’s end. We will enjoy watching Bully swishing his way round Astbury Hall on Thursday – while also sparing a thought for the man down the road who was less fortunate.