To The Manor Born

The Lure Of The City Of Spires

This time last year, we posted a piece detailing several lesser-known playing links between Leicester and Wolves. Now, as a belated follow-up, we look at the high number of players who headed south from Molineux to Oxford more than half a century ago and etched their names into football history there.

Who better to talk us through the characters and personalities involved than Ron Atkinson, whose company we enjoyed at the annual Midlands Soccer Writers’ lunch yesterday and whose memory and knowledge remain as sharp as ever? 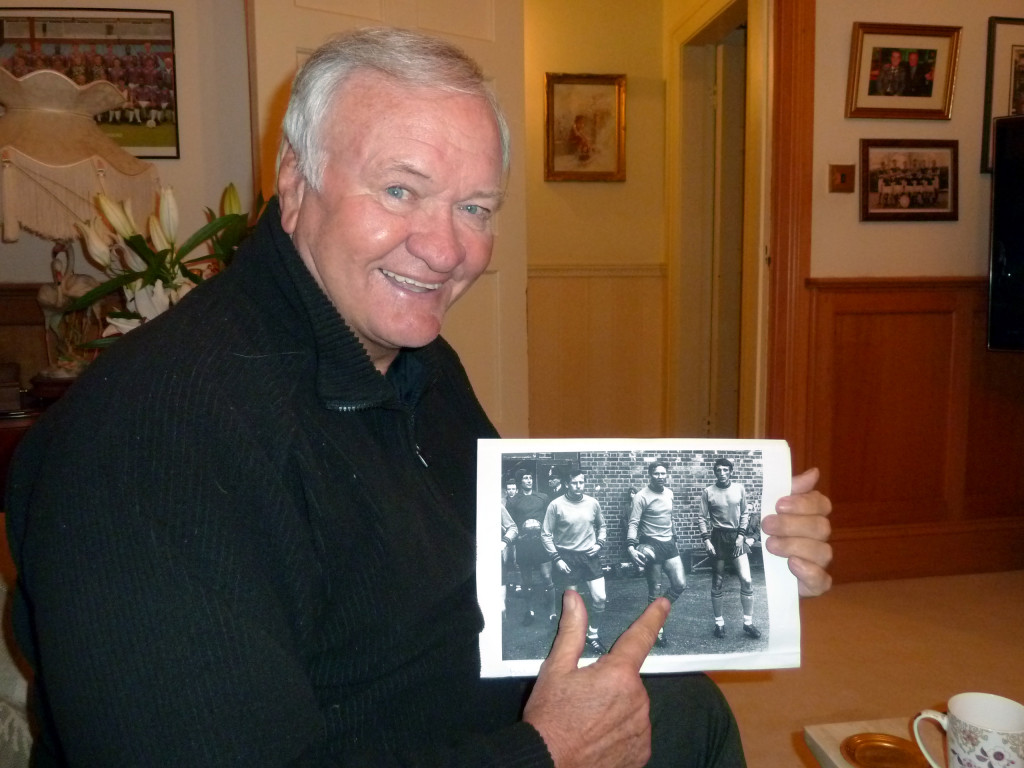 Ron Atkinson, photographed by Wolves Heroes as he points himself out on an Oxford photo also showing Colin Harrington (right), Cyril Beavon, keeper Jim Barron and the late Maurice Kyle.

Atkinson, a former Wolves groundstaff boy, remains the record appearance maker in Oxford’s history with his 560 games for them and is not one to abandon or forget about old friends.

We asked him, as their skipper in many cases, to talk through the background as to why so many players who fell short amid the log-jam of top talent at Molineux then headed to the club known until 1960 as Headington United. Here is his player-by-player breakdown, starting with the man who was Wolves’ last line of defence in their famous FA Youth Cup final triumph in 1958.

Johnny Cullen would have had top keepers like Bert Williams, Malcolm Finlayson, Geoff Sidebottom, Nigel Sims and Noel ‘Paddy’ Dwyer ahead of him at Wolves, so he didn’t break through there. He went to Oxford as back-up to Owen Medlock and played some first-team games. There was also another lad called Mick Richards, who I bumped into in Tenerife a couple of years ago, who was a good keeper. I would be interested to know whether he was at Molineux as well at some point as he was from the Telford area.

Colin Tether, a chunky left-back from the Black Country, did briefly make Stan Cullis’s first team and was, I think, head groundstaff boy at one point. I was one of several lads who got ten bob from Bic pens once for pretending to get Billy Wright’s autograph in one of their adverts. I think Colin was part of it as well and on the same photo. There were high hopes for him when he went to Oxford in 1960 and he did okay for us in our Southern League days without setting the place alight.

Cyril Beavon, from Barnsley, had come through the  Wath Wanderers nursery and became a legend at Oxford by making about 460 League appearances. I was a right-half and he was the full-back behind me. He had two very good feet and was a lovely striker of the ball. In one big game at the end of a promotion season in the mid-1960s, he kept his cool to put away a vital penalty – I think against Tranmere or Brighton. His son Stuart had a terrific career as well with Reading and now his grandson, also a Stuart, is doing well at Burton.  Cyril may have reached Wolves’ reserves.

Colin Harrington is the one who surprises me. He is from the Oxfordshire area and I didn’t realise he had been at Wolves……my guess, in that case, is that it would have been as an amateur rather than a pro. He must have played approaching 300 games for Oxford and is one of the fastest players I ever played with. He was a flying left-winger and could run the length of the field at top speed, not just in 20-yard bursts. The old groundsman at Oxford, a super chap, reckoned he had two gates put in behind the goals, so Colin could just keep running. Not long after the 1966 World Cup, we played Fulham and he ‘murdered’ George Cohen.  A bit later, we were at Blackpool and he did the same to Jimmy Armfield, who was George’s back-up in the England squad. Around the same time, we played Watford and we thought he would take their player-manager Ken Furphy to bits as he was getting on a bit but Colin hardly had a kick! He was unstoppable, though, when he was on his game and could cut in on his right foot as well as using his left.

Maurice Kyle was a north-easterner who sadly died in his early 40s. I remember going to see him during my first stint at West Brom, not long before he passed away. He played 275 League games alone for us and was a bit before his time – a centre-half in the Alan Hansen mould who could play football and was not overly aggressive. I don’t think he got close to making it at Wolves. He had Peter Russell ahead of him and Peter played only a few matches in the first team. We shared digs and it took me a while to work out he was nicking the going-out shirts I used to take home to the Midlands at the weekend to get washed. He was a lovely lad and went on to coach Oxford in the Varsity football games.

So what was the link between Molineux and the Manor Ground? Why the major exodus?

Big Ron continues: “Arthur Turner was the manager for ten years or so at Oxford, either side of us getting into the Football League (when Accrington went bankrupt in 1962).

“He was from the Potteries and was a centre-half with Stoke and Birmingham, among others, before managing Blues for a few seasons in the mid-1950s. He had a good scouting network up here and signed reserves from one or two clubs, including myself from the Villa.

“His recruiting was an example I followed in my early days at Cambridge. I was very busy seeing what players other clubs had in their reserves who might soon be available.”

The trail doesn’t end there, although three other Wolves-Oxford connections either concern first-teamers or the transfer of someone who moved in the opposite direction. Atkinson played with all three.

“Jim Barron is one of my best football mates and went to Oxford via Chelsea after leaving Wolves in the mid-1960s,” he said. “We were having a laugh when we met the other week about how he once caught a cross against Preston on his six-yard line and was then promptly sent flying into his net by Alex Dawson! What he remembered was that I was the nearest team-mate to him and I just burst out laughing. Alex would have got life now for what he did! Reaction-wise, Jim showed in his two or three very good years with us that he was as good as anyone around but his kicking could be as bad as Mark Bosnich’s. I got a bad back from stooping to head his goal-kicks on. 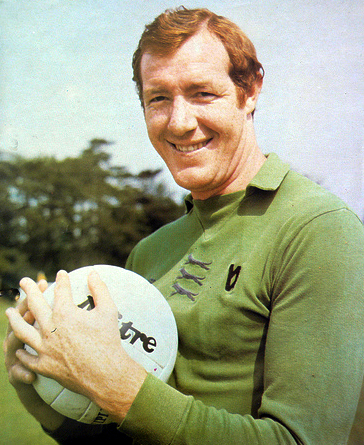 Mick Kearns in his time with Wolves.

“Mick Kearns came in one Easter and played two games – against Cardiff and Leicester – as a teenager. He played blinders in both. Soon after, we went to Villa after they had beaten Birmingham well and he had another phenomenal game in a 0-0 draw in front of about 40,000 when they were trying to stay up in the Second Division. Kearnsy was magnificent and hurt me many years later when he came to Albion with Wolves and saved a penalty from Peter Barnes in a 0-0 draw.

“Finally, the best player I ever lined up alongside was Colin Booth. He had won League titles with Wolves and played in some of their great European nights. He came to us after being leading scorer for Nottingham Forest in two successive seasons and hitting 30-odd a season for a couple of years at Doncaster. When he signed at Oxford, he bought this detached house for £4,000 and we thought he was so big time! But I learned such a lot from him. He was the best volleyer I ever saw and we used to chat in a cafe near the ground and then go out and practise little moves in training that he had come up with. He was a brilliant player, as good as I had seen, and it was such a shame when he did his cruciate ligaments and couldn’t play again.”