For A Change – A Take On The Present

Occasionally, on Wolves Heroes, we stray outside our normal mode of operation to present an article of a more contemporary feel. With the dust settled on an exciting 2014-15 Molineux season, we received this piece from a guest writer taking an early look at the campaign awaiting us in a few weeks.

Can Wolves return to the promise land of the Premier League?

Despite missing out agonisingly on the play-offs on goal difference, everyone connected with Wolves should be proud at the excellent season they enjoyed after returning to the Championship. Kenny Jackett has done a wonderful job of transforming the club’s fortunes and only defeats against Birmingham and Middlesbrough in the final few weeks of the season denied them a place in the play-offs and the chance of securing back-to-back promotions. There is certainly enough belief and quality at the club to suggest that Wolves could be among the strong contenders to secure the 2015-16 title. But, given the clubs coming down from the Premier League, the Championship could be even more competitive than it was this season, when matters at both end of the table went down to the wire. It will certainly suit Wolves to go in as dark horses to compete at the Championship summit, as it is in this role that the team seem to thrive the most – a quality that could see them end their three-year hiatus from the Premier League and return to the promised land. 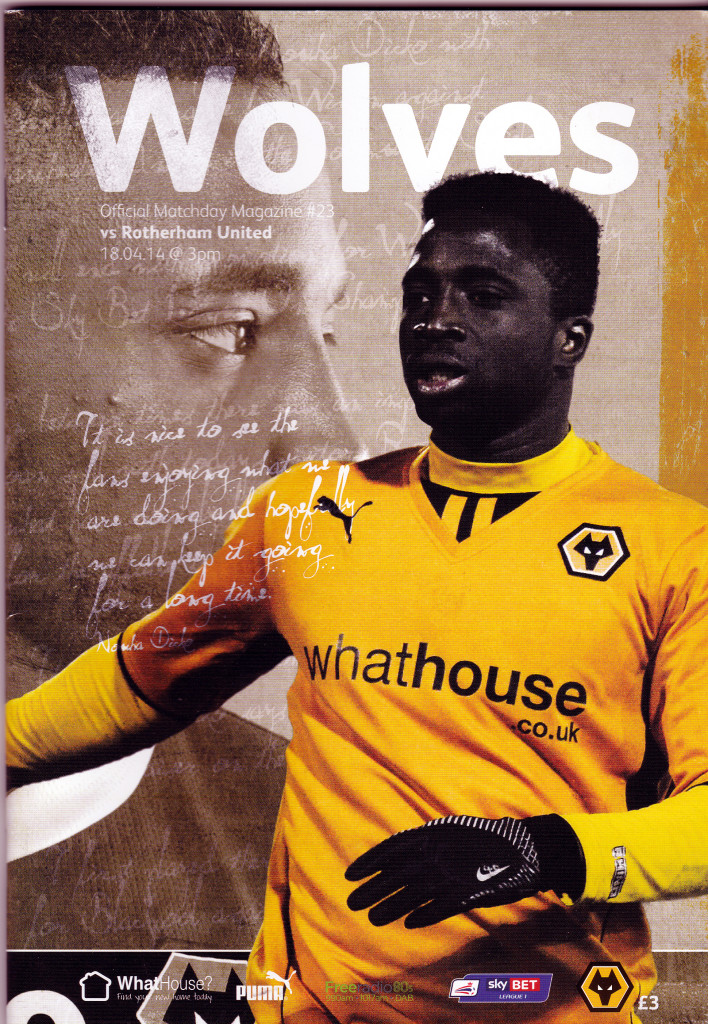 Nouha Dcko, as captured on the front page of Wolves’ award-winning programme.

Wolves were a joy to watch in their first season back in the Championship, with Jackett’s preference for fast, free-flowing football paying dividends as they swept teams aside. Bakary Sako and Nouha Dicko were at the forefront of everything good about Wolves while January transfer window signing Benik Afobe proved to be a revelation and became an instant hit with the fans, going on to score 13 goals in his first 21 appearances for the club. James Henry and Kevin McDonald also deserve a mention for the quality of service and protection they provide to the forwards. Although Wolves will have learned the lessons from games in which they came unstuck, it was their positivity and energetic attacking play that took them so close to reaching the play-offs. Jackett has already been active in the transfer market by securing a deal for highly-rated 19-year-old Jed Wallace from Portsmouth but he may have to be backed even further by Steve Morgan if the brilliant Bakary Sako decides to follow Kevin Doyle through the exit door.

Very few teams enjoy the prospect of travelling to Molineux and many go away from that corner of the West Midlands with nothing as Wolves have maintained a wonderful reputation for being formidable on home soil. Ensuring Molineux remains a fortress will be crucial if Wolves have aspirations of being serious Championship contenders next season, and although Jackett may address the team’s form away from home, winning the majority of home games has been proven to be the recipe for success in this division. Wolves often look to play expansive football in front of their home fans and, if Jackett can manage to replicate that away from Molineux, there is every chance the club could find themselves back in the Premier League.