Another Court Appearance For Bob

Bob Hatton photographed by us at home in recent times.

Wednesday, May 6: Took advantage of the annual Midland Soccer Writers lunch taking place at Knowle and Dorridge by paying a visit to Bob Hatton’s house nearby. There’s a family connection between Bob’s wife and Express & Star sports writer Tim Nash and a warm welcome is always guaranteed. Mind you, these things have to be planned…….Bob, still sprightly at 68, doesn’t spend all his time pottering in the garden and was just off for his regular game of tennis.

Tuesday, May 12: Called at Terry Wharton’s in Perton to drop off some copies of a photograph to which he had taken a fancy after being asked to sign it at the recent Wolves Former Players Association dinner at Molineux. It was a nice glossy one, sent down from a collector in Manchester, taken of him kicking in before a game at Albion. Also borrowed a good part of Terry’s considerable collection of scrapbooks on his career and have promised to re-stick the pieces in some kind of chronological order. The sticky tape had clearly lost its stickiness all these decades on.

Saturday, May 16: Saw three ex-Wolves men on a photograph, taken 20 years on, of the Blackburn squad and staff responsible for them winning the Premier League title in 1994-95. Two of them were goalkeepers, Bobby Mimms and Tim Flowers, the other Mark Atkins. We saw Tim, who had a hip replacement not long ago, at the Soccer Writers lunch last week and reconnected him, at his request, with the former Express & Star man Dave Harrison after he told us he dropped his phone in a pool and lost all his numbers.

Wednesday, May 20: Received an email from Julian Pugh, from Worcester City, informing us of the passing-away of a wartime Wolves player called Bill Jackman. We were glad to check our books and inform him that a player has been listed in Wolves literature as J Jackman – one who played 14 wartime matches for the club and scored one goal. Julian’s excellent tribute piece is at http://www.worcestercityfc.com/news/city-tribute-to-bill-jackman-1429869.html

Friday, May 22: Heard a piece on BBC Radio 5Live about the forthcoming anniversary of the D-Day Landings and was staggered to realise I was just passing Bill Shorthouse’s old house in Compton as I was listening to it. I well recall sitting in Bill’s dining room with him more than a decade ago and listening spell-bound as he told me how he took part in World War Two’s most famous operation and was hit by a bullet for his trouble. Utter respect.

Sunday, May 31: Hardly had a chance to chat with Helen and Wayne Clarke when they mingled with former friends and colleagues at the FPA dinner at Molineux in April, so called to see them for a bit of a catch-up during a Sunday of bobbing about the West Midlands on business. Was pleased and surprised to hear that their daughter Hollie is co-manager of Madam Clarke’s, the lovely coffee shop in King Street, Wolverhampton, where I interviewed players like Dave Woodfield, Frank Munro and Brian Roberts in the past. Made a note to pop back in there as soon as possible after their current refurbishment is complete. 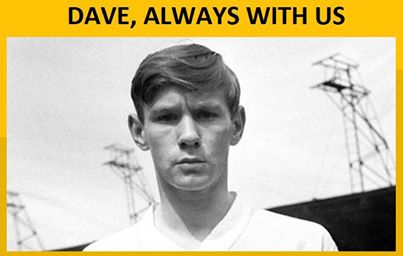 Waggy, as a lad with his home-city club.

Friday, June 5: Drove past the allotment that used to be tended with great care and attention by Dave Wagstaffe and had to pinch myself when realising it is nearly two years now since we lost him. What with his beloved flower and vegetable patch in Tettenhall and his caravan overlooking Morecambe Bay, he was hardly leading a rock ‘n’ roll lifestyle, was he? It was while pruning his roses, or something similar, that I remember meeting him five years ago this week to take a photo of him with the Bert Trautmann autobiography his legendary former Manchester City team-mate had sent him.