Countdown On To New Promotion Challenge

We can tell the fixtures for the coming season are out next week – we have received another article from a commercial partner looking towards the 2015-16 Sky Bet Championship!

Our latest guest writer sees the coming campaign as being another in which Richard Stearman, who we look forward to watching take further strides (along with David Edwards) up the Legends area of the site, will be vital.

We plan to be back tomorrow or on Saturday with the resumption of our more nostalgic output of stories but hand the stage over again now with an article guaranteed to appeal even more to those who love a flutter…. 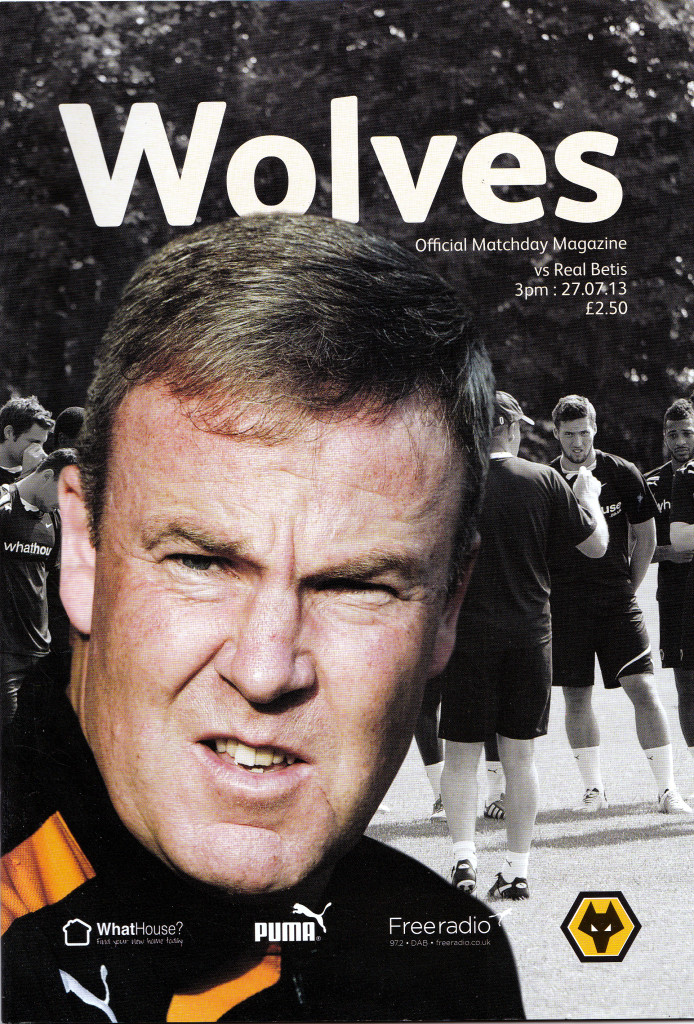 Jackett on the jacket…..Wolves’ head coach on the front cover of the programme for his first home game – the friendly with Real Betis 22 months ago.

Losing out on a major prize only on goal difference can be extremely painful and Wolves are the latest club to experience it after missing out on the play-offs.

For long periods of the campaign, they looked like getting back into the Premier League with a second successive promotion but a run of five straight defeats during November proved extremely costly.

They fell short of a top-six finish on goal difference. Ipswich finished sixth by virtue of having goal difference that was just four better. Wolves will be refreshed and going at it again next season, though, and Betfair places them 12/1 for title success in the latest Championship odds.

Head coach Kenny Jackett will have been extremely disappointed at going so close to consecutive promotions. Of course, qualifying for the play-offs is not a certainty for getting back into the Premier League but maybe Wolves would have had a better go at taking advantage of the play-off route than Ipswich, who were defeated 4-2 on aggregate by eventual Wembley winners Norwich.

Recent meetings between Norwich and Wolves have been extremely close and one sure way of overcoming any disappointment at Molineux is by preparing hard for next campaign as soon as possible.

Even if Jackett tries to overhaul the squad in the hope of going a step or two further, it is almost certain that defender Richard Stearman will stay at the club unless there is a big offer from the Premier League.

The 27-year-old has been at Molineux since 2008 but his future there looked bleak after a poor 2012-13. He managed only 15 appearances for the club in all competitions in that campaign before being loaned to Ipswich and this dip, coupled with Wolves being relegated to League One, made it difficult to see him emerging as a successful top-level player again.

The defender, though, has come back in the best possible manner and was crowned the Players’ Player of the Year at the club, crediting his rejuvenation to Jackett, who he regards as being one of the best in the business.

Jackett, 53, ironed out the niggling issues in Stearman’s game and has been able to make these the best years in his career. There have been rumours that Fulham would be interested in signing him but, especially if Wolves make a strong start to the coming season, it is difficult to see him leaving in the near future.

Stearman says man-management is one of Jackett’s biggest assets. The head coach also knows the Championship extremely well, with the fate of the club having been in his hands when he took over in 2013.

Wolves had suffered a second consecutive relegation and there was a danger of the slip down the divisions becoming a long-term problem. But, immediately after taking over, Jackett put together a title-winning team who came back up right away by setting a new record of 103 points in a League One campaign.

The dream of getting back to the Premier League has not gone away. Preparations for the new campaign began when the club signed Portsmouth midfielder Jed Wallace. The 21-year-old is thought to have cost £275,000, which was the release clause in his contract, and he could turn out to be a money-spinning signing if his talent is fully realised. A number of other Championship clubs like Ipswich, Charlton and Fulham were also interested in the highly-rated England under-19 player, who has signed a three-year contract and is expected to be part of the first-team squad in 2015-16.

Wolves will be facing several big challenges in the promotion stakes, with that of Hull expected to be one of the more serious.

Their much better financial position is likely to help them retain top players like Michael Dawson. The other relegated teams, QPR and Burnley, are not given the same sort of chance as the Humbersiders.

Betfair expects Hull to get back up on the first time of asking at odds of 9/1. Derby and Middlesbrough only narrowly missed out on promotion and they are backed at 9/1 and 10/1 respectively.

Aside from Stearman, goalscorer Benik Afobe, who finished a brilliant campaign with 32 goals, said he is already looking forward to the next promotion challenge.

After scoring his 13 Wolves goals in just 21 appearances, the 22-year-old might have been expected to be a sought-after property in the summer window. Yet his decision to remain loyal to Molineux is a sign that he has huge faith in Jackett. When players have confidence in the head coach, it often leads to good results. This could be the start of a great era for Wolves.