No Regrets For Colin Over Career That Promised So Much 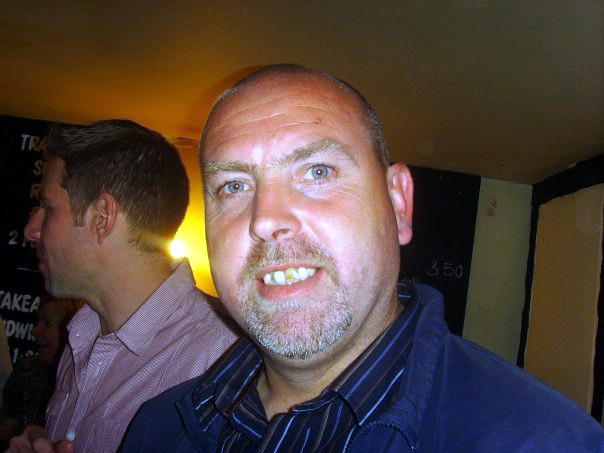 Difficult though it may be for younger Wolves supporters to now appreciate, not much came off the Molineux conveyor belt for well over ten years when the club really needed to unearth some gems.

In between the John Pender/Tim Flowers era in the first half of the 1980s and the arrival of Jamie Smith in the mid-1990s and more particularly of Carl Robinson and Robbie Keane a season or two later, it’s a struggle to come up with names of lads who made the grade.

Wolves did get almost 100 first-team games out of local boy Nicky Clarke during the famine and there were any number several years earlier who flickered, played a few matches and then moved on without any lasting impact.

Amid a dearth that was symptomatic of sharp Molineux decline, though, hopes were high that one home-grown youngster would develop into a genuine star.

Maybe it was a combination of the hairstyle, the strictly working class background and the shirt number he wore but there was something about Liverpudlian Colin Taylor that sparked dizzy thoughts and led to him frequently being likened to the crew-cut centre-forward already in situ at Wolves.

“He’ll be better than Bully,” one voice ventured. Ok, it was a fan in a bar but an off-the-record view around the same time from inside Molineux’s corridors of power bore out the potential Taylor undoubtedly had. “He’s better than Andy Cole,” uttered a member of Graham Turner’s trusted inner circle in a period when the two players were jousting for places in the England youth side. Praise indeed! Not that it seemed unduly fanciful.

On the very night Steve Bull effectively secured his trip to the 1990 World Cup finals in Italy by making huge waves with two spectacular goals against Czechoslovakia, Taylor was causing a few ripples of his own in the international pool.

In a game played immediately before the seniors’ fixture, he went on ten minutes from time for his England youth debut against the young Czechs and immediately enlivened a dreary clash with an explosive shot.

Ian Walker, David Tuttle, Scott Houghton, Steve Harkness, Andy Awford, Robert Ullathorne and Lee Clark were also involved, as well as Cole. Scott Minto should have been there but had to pull out and Steve McManaman, Jason Peake and Bradley Allen were others around the squad. So was it that outrageous to believe Taylor was on his way to the top?

“I played at Wembley twice in four weeks, against Czechoslovakia and Poland, and hit the woodwork with a volley,” he recalls. “I also played at Oxford against Denmark when we were annihilated 5-0 on a freezing night and I headed against the bar.

“Dave Burnside was the manager and I’m so glad I represented my country, although the preferred system was often one up front and that meant I couldn’t get in regularly.”

Taylor, born on Christmas Day in 1971, exploded into Wolves’ junior teams as a goal machine of Bully proportions, picked up as he was after playing for Kirkby Schools against Wolverhampton in the Gillette Trophy. A 2-2 draw at Wolverhampton Casuals and 2-0 home win on Merseyside were watched by the obligatory smattering of scouts, one of whom contacted him to express Molineux interest.

It meant we would subsequently see plenty in these parts of his dad Ernie – his actual name was Billy but the nickname was predictable enough given that he was a milkman.

“I signed in 1987 at the age of 15 and was lucky enough to have a good scoring record in the junior teams at Wolves,” Colin recalled. “I think I got something approaching 120 goals in my two years in the youths there.

“I scored 62 times in my first season and 40-odd in my second. We had a midweek youth league as well, so that meant there a lot of matches.

“We played at Spurs in the FA Youth Cup in a tie that should have taken place two weeks earlier but was called off just as we turned into White Hart Lane because they had a first-team match against Norwich on TV and they wanted to protect the pitch. When it was played, we had an inexperienced side and were beaten 4-1, although we took the lead when I slid in and their keeper Ian Walker took his hand away. I got up and hit it into the roof of the net.

“Andy Harnett was often my strike partner in the youth team. We played once in a cup-tie against Nottingham Forest that went to extra-time, then went back to Molineux and the two of us were told we were in the reserve squad for a game at Burnley that night.  The idea was that we would play part of the game each but Andy was held back and I stayed on and scored the winner in the 89th minute.

“I laugh now when players say they are tired after playing two games in three or four days. Having that experience and pushing yourself was fabulous. 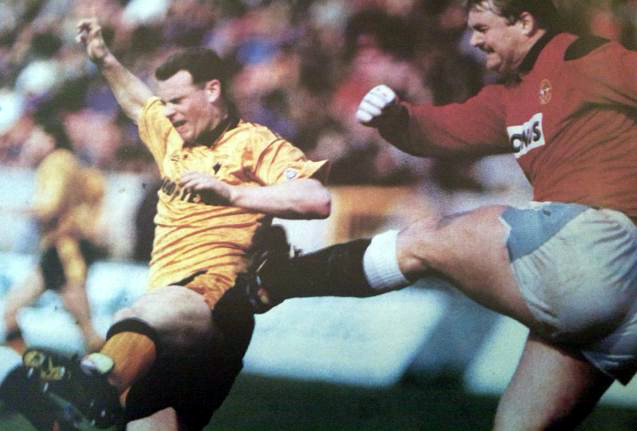 No shortage of commitment during one of his first-team opportunities at Molineux.

“My first time with the first team was a win in a pre-season game at Stoke, where I went on for Jackie Gallagher. I was cleaning his boots at the time. In another friendly, I won a basket of fruit for scoring a hat-trick in the first match of a pre-season tour to Sweden in the early 1990s.”

Taylor’s competitive Wolves first-team debut came in the Rumbelows League Cup tie at Hull in the autumn of 1990. With a long-term injury to Andy Mutch leaving the no 10 shirt free, he went on as substitute late on in a 0-0 draw highlighted by a Mike Stowell penalty save.

Unquestionably, his Molineux highlight came three months later when, in his fourth appearance in the League, he scored two late goals in a 4-1 victory at home to a Millwall side containing Alex Rae, Teddy Sheringham and Gary Waddock.

He played 19 senior games that season but didn’t score again and had to be content with on-going bits and pieces.

“I played in one of Wolves’ first TV games after matches regularly started being shown live,” he added. “It was at Leicester in the Zenith Data Systems Cup. I remember the kick-off being delayed because the adverts were apparently still showing. What I had forgotten was to ring my dad to tell him I was playing.

“In a home game when we were struggling to break through against Sunderland despite them being down to nine men, I pulled the crossed back for Paul Cook to score the winner. I’m glad that goal is on Youtube.

“I scored another goal, against Peterborough at Molineux, in one of my other seasons but it was so difficult getting in ahead of Bully and Mutchy. There have been some famous partnerships in football – and that was one of the best. No matter what I tried, it was only likely to be an injury that got me in.”

The youthful spark had then sadly diminished and Taylor’s time at Wolves ended with a free transfer in the summer of 1993, almost a year before a former England manager of the same surname considerably lifted the profile of an underachieving club.

The player went to Telford and was there for two years at the start of a thorough tour of the non-League circuit, also taking in Knowsley, Runcorn, Welsh club Bangor, Chorley, Caernarvon and Worcester. He pauses over whether he has omitted any stopping-off points but his reflections now contain few regrets and certainly no bitterness.

This interview began on FA Cup final day – I know because he told me his Wolverhampton-born daughter is an Aston Villa fan and had obtained a ticket for Wembley – and concluded today on the day he joined friends for a sponsored charity walk taking in five West Midlands football grounds and ending at Molineux.

The fact he arrived back from holiday in Spain only yesterday morning and then travelled overnight to be there for the start sums up his varied, busy life.

“Do I wish I could turn the clock back? No. I wouldn’t have my kids and a lovely wife, would I?” he smiles.

“In 1997, I was still living in Wolverhampton while playing for Worcester and went on holiday to Lloret de Mar with some lads, including Jason Guy, who does a lot of great work around Wolves. I first bumped into him in the club shop at Molineux when he was buying something for his sister and we hit it off straightaway.

“I met a lady on that holiday in Spain called Collette, who is from Suffolk but was living in Liverpool. We got together and are now married, working together and living in East Anglia in a place called Framlingham, 20 miles out from Ipswich into the countryside. It’s very much in the sticks. The singer, Ed Sheeran, is from here.

“I moved over there in 2001, having been living back in Liverpool in the meantime, and had had one daughter since 1993 – don’t ask me how she became a Villa supporter! I also have a lad who turned 16 this month and girls aged 13 and ten.

“I run a cleaning business with Collette. We concentrate on household mainly and have been in that for four years since I did security work and some gardening. Neither of us drives, so we get around by bus.

“Apart from Wolves, my best times in football were probably at Worcester, where I was joint top scorer one season. I was always looking to get back into the League and had trials at Shrewsbury. There were loads of letters as well but there comes a time when you have to accept it isn’t going to happen and move on.

“I don’t have any regrets other than just wishing I could have been at Wolves a bit longer to prove to people that what I had learned from Bully and Mutchy.

“People asked me whether I hated having them blocking my way but I didn’t. I learned so much from them. But it obviously makes it that much harder to break through when you have someone above you scoring so many goals in the first team. 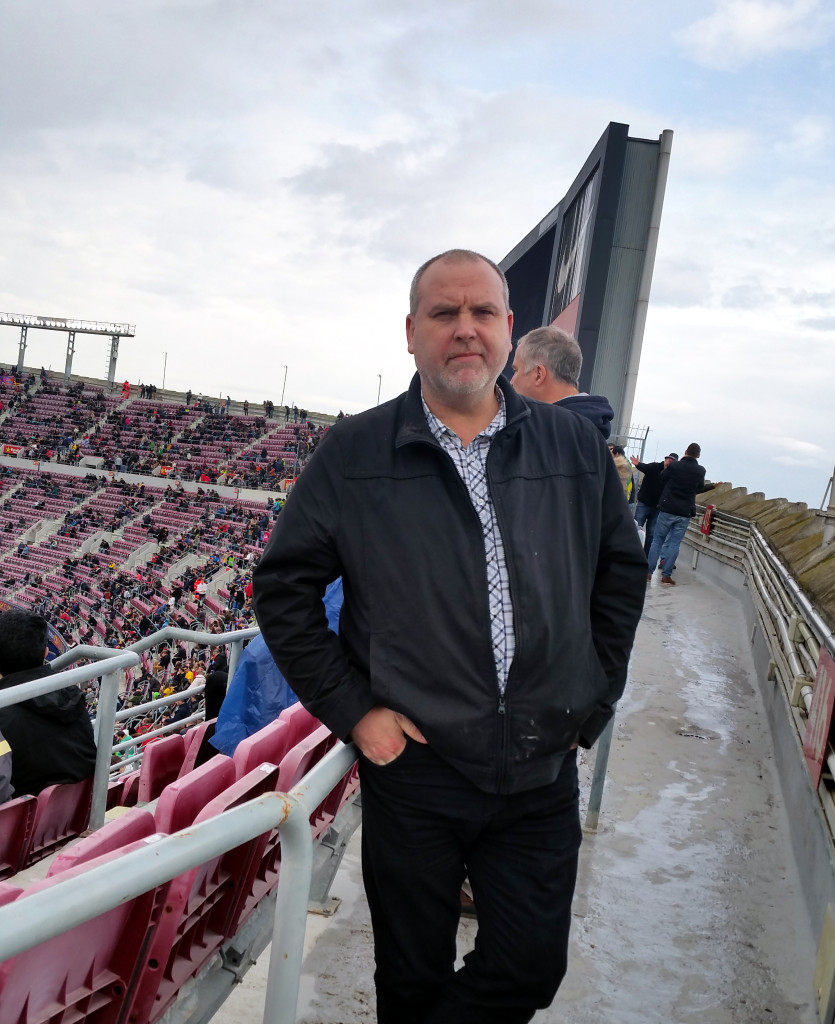 Taylor enjoying the high life at the Nou Camp.

“Bully said he thought I would follow him one day but their time together went on for seven or eight years. When I look back and see the goals they scored, there’s no way I can blame myself too much. They are both in the club’s Hall of Fame after all. And I did play 24 games for Wolves. I’m proud of that.

“What I am doing now with the Wolves All Stars is fantastic fun and that has given me the chance to get back in close touch with my great friend Jason Guy, who is like a brother to me, and Mel Eves.

“Having been out with Jason a few times after we first met, we lost contact but got in touch again through Twitter and charity projects. Now, raising money for some wonderful causes is a good incentive to keep playing and to team up with the likes of Jody Craddock, Mark Clyde and two lads I was at Wolves with, Darren Simkin and the midfielder Paul Jones.”