A Unique Place In Molineux History 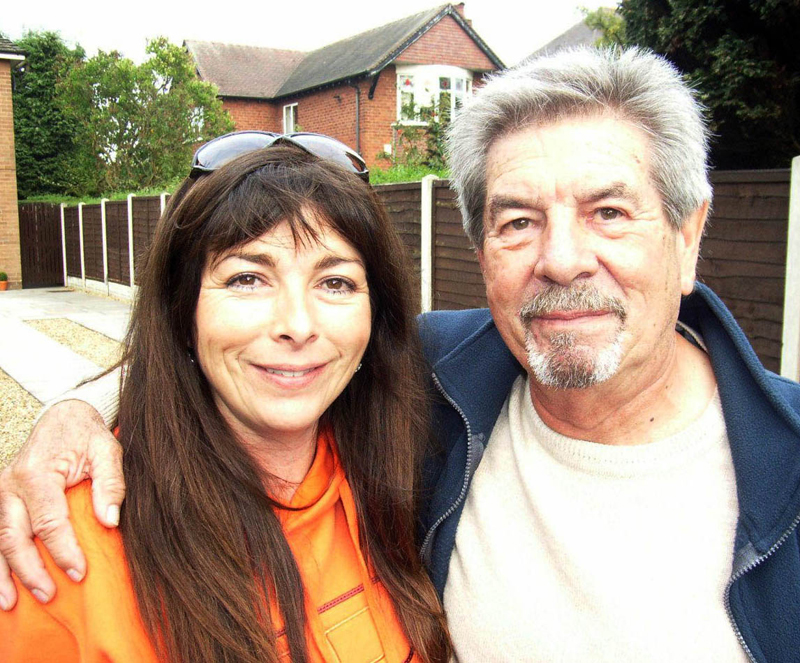 It’s at times like this when you are thankful for the opportunities; thankful, in our case, that we were able to meet Des Horne at some length during what proved to be his final visit to England.

We had been in cyberspace for little over a year when the kindness of his eldest daughter Nicky and her good friend Maureen Stobart in acting as go-betweens ensured we had an exclusive audience with Wolves’ 1960 FA Cup winner while he was heading back to Wolverhampton from a seaside trip.

It was all a bit off the cuff. We parked our cars end to end, just off the M6 at Stafford, then chatted for half an hour and took some happy photos. We also arranged to meet in more civilised surroundings for coffee in Beatties a couple of lunchtimes later and were glad our good friend John Lalley – a vital part of the Express & Star sports desk on such matters of nostalgia – could accept our invitation to attend as well.

Des’s trip back to his first football home was an early 70th birthday present and an emotional one. He and Nicky, who was the only child from his marriage to his Tettenhall-born first wife, Jan, hadn’t met for over a decade and had once gone almost 25 years without seeing each other, resident as they were in different hemispheres.

He had headed back to his native South Africa in 1966 after following 52 first-team appearances for Wolves across five years by playing more than 130 times for Blackpool. Jan and Nicky couldn’t settle in the republic, returned to blighty when the little girl was four and found reacquaintances hard to set up in the decades that followed.

In what is as much a family story as a football one, our main duty is perhaps to underline Horne’s feat in becoming the only man ever to win both the FA Youth Cup and FA Cup with Wolves.

Having landed on these shores as a shy 16-year-old who tipped the scales at less than 9st and measured only 5ft 5in, the Durban-born hopeful had some big boots to fill.

“He was groomed as a replacement for Jimmy Mullen,” Ted Farmer tells us. “Cliff Durandt arrived around the same time from South Africa and was much more outgoing and bubbly.

“Des was quiet but a nice guy who I liked a lot. He was 18 when he played in the second leg of the FA Youth Cup final against Chelsea in 1958 and only 20 when he faced Blackburn at Wembley two years later.

“I can’t think of anyone, anywhere, who might have winners’ medals from the two competitions at a younger age.”

Farmer’s description of a direct player with great pace, although not necessarily blessed with Mullen’s ability to deliver high-quality crosses on the run, led us to wonder whether we might be talking of someone perhaps akin in style to Steve Froggatt.

Horne’s 6,000-mile journey to the West Midlands came at a time when Charlton, Portsmouth and Blackpool were also interested in signing him and he made his senior debut in the first League game following the historic Youth Cup final comeback – a 5-1 home win against Nottingham Forest on kick-off day in 1958-59, when his left-wing partner, Bobby Mason, scored a hat-trick.

He kept his place in a follow-up defeat at West Ham before Mullen was recalled but scored in his third game, a victory at Blackburn in mid-September.

All told, he played ten first-team matches that season, including the Charity Shield defeat at Bolton on what now sounds the highly unusual date of October 6. He also scored against Nottingham Forest and Portsmouth in the space of a week over Christmas but found himself sharing the no 11 duties with Mullen, Norman Deeley and, less commonly, Jackie Henderson as Wolves retained their crown as champions. 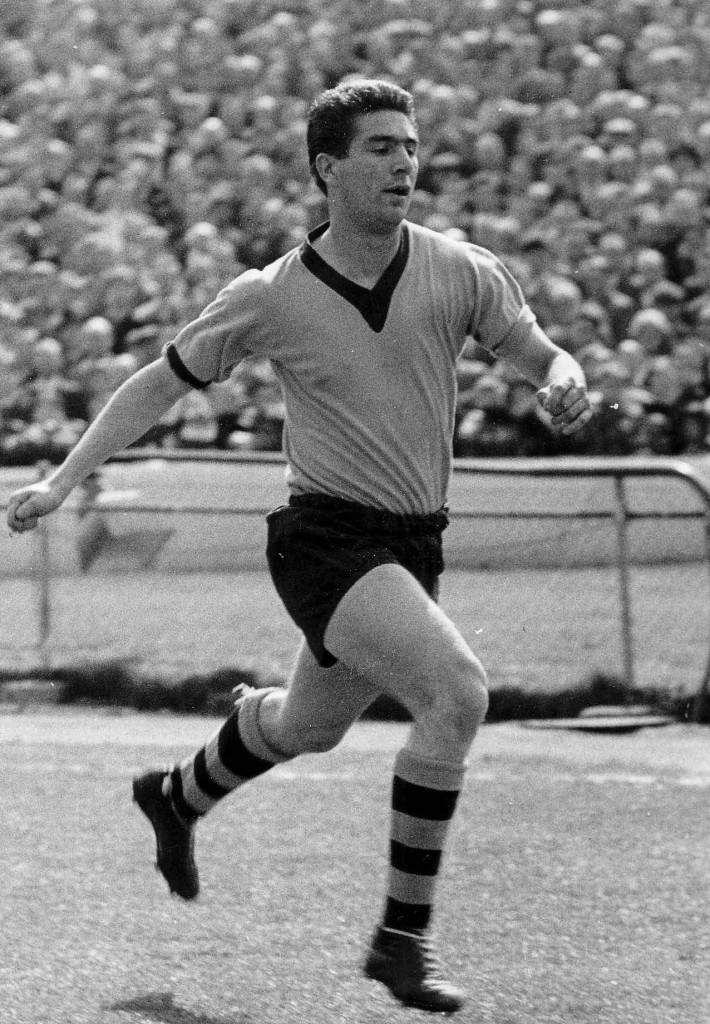 In full flight down the wing in the 1959-60 season in which Wolves almost won the double.

Deeley started 1959-60 in situ as well and did so with a terrific rush of ten goals in ten matches. Then he was switched to the right in the autumn, so Horne could be accommodated once more. The results were outstanding.

Des netted twice at Preston, twice more in a 5-1 romp at Chelsea on the final day of the League campaign and, in between, once each against Leeds, Arsenal, Luton, Burnley, West Ham, Newcastle and Charlton.

The ones against Newcastle and Charlton were in the FA Cup, in which he played in six of the seven matches in the triumphant run, the exception being when match-winner Deeley again took his role for the semi-final win over Aston Villa at The Hawthorns.

Eddie Stuart filled up even in his later years when describing how his potential pride at leading Wolves out at Wembley was taken away from him by Stan Cullis’s selection of George Showell at right-back instead. Imagine the emotion, then, of a fellow South African, eight years Stuart’s junior, walking into the Wembley cauldron and, in so doing, following in the footsteps of another player from their country. Blackpool winger Bill Perry played in the ‘Matthews final’ of 1953.

When we chatted over cappuchino, Horne spoke of his considerable nervousness beneath the twin towers. His aim was merely to get an early pass or an early cross away to good effect to settle him down.

YouTube confirms that he was successful and, in a game defined by the contribution of the two-goal Deeley on the opposite flank, he had the satisfaction of directly setting up the one that made it 2-0 at three-quarter time.

Horne, who also played home and away against Red Star and Barcelona in that season’s European Cup, resumed the other side of the summer break as though he was going to nail down the position for years.

He scored in three of the first four Division One games after missing the Charity Shield draw at League champions Burnley, one of those goals coming back at Stamford Bridge, but lost his place soon after the Farmer-inspired 3-1 victory at Manchester United in late September that brought him his 18th and last appearance on Wolves’ score sheet.

Durandt had a promising first-team fling of his own in the following months and a youngster by the name of Alan Hinton was emerging. In keeping with the Cullis way, there was always scope for promotion from within.

A game of tennis constituted the first date Des and Jan had after they met by chance at Claregate and they married and then had Nicky in St Anne’s after he had moved to Bloomfield Road in March, 1961.

The £15,000 transfer came about in the blink of an eye without him asking for a transfer, agreement quickly being reached in a hotel in Stoke. Among his new team-mates were Bill Perry – like him, recommended by a former Bolton winger called Billy Butler – and Brian Peterson, another South African with whom he had shared a flight to England in 1957.

In the town where his first wife has run a hotel for more than a decade, Horne was a hit. His 20 goals in 137 Tangerines appearances included a winner at Liverpool and two strikes against Wolves, the second in a 1-1 draw at Bloomfield Road in January, 1965 providing him with his final appearance among the marksmen in senior English football. He was given a free transfer on June 30, 1966 – exactly a month before England’s famous World Cup final victory.

As well as being friendly with Nicky through her past employment at the Express & Star, we at Wolves Heroes spoke today with her half brother Darryl in South Africa and filled in some of the gaps in the story that remained after we posted our first story about him in 2009 (https://www.wolvesheroes.com/2009/09/19/heart-warming-tale-of-returning-cup-winner/) and a second (https://www.wolvesheroes.com/2013/10/21/towards-the-cape-for-horne/) in 2013.

“I was born in Johannesburg in 1971 after Dad married his second wife, Joanne, the year before,” Darryl said. “I arrived too late to see much of his football over here, although he played for a few seasons as a professional for Southern Suburbs in Joburg.

“He also coached the side I played for at under-13, under-14 and under-16 level and had some tips to pass on to us when we were playing rugby at school, especially with the kicking!

“As a child, I suffered from asthma, so I leaned towards golf and was lucky enough to get down to scratch. It was a good decision because that became our ‘together’ time over the years and he was a decent player himself off a handicap of ten.

“Dad was one of seven or eight children and lost his own father, who had been a major in the Natal Command, when he was only 12. I recall him saying he had practised his football by kicking a tennis ball, bare-foot, in the back alley at home. He also sneaked off with his uncle to play in the parks and on the beach front near where he was born in Durban.”

Darryl and his great-grandfather were also given the unusual middle name of Tolton that Des had, the latter having fulfilled his wish a few years ago to retire back to the coast, some 30 miles north of Durban in Salt Rock.

Horne, who also played briefly for Powerlines and Durban Celtic, had lived for decades around Johannesburg, most recently in Deneysville an hour to the south, and worked for 25 years in the air conditioning industry, then specialising in work for abattoirs when starting his own engineering business. More recently, he ran, with his other daughter Natalie (four years younger than Darryl), a ‘bottle store’ (off licence).

Des, who leaves five grandchildren as well as his three kids, had been plagued at various times with knee problems, only for worries over a heart problem in latter years to dissuade doctors from recommending a replacement of the joint. 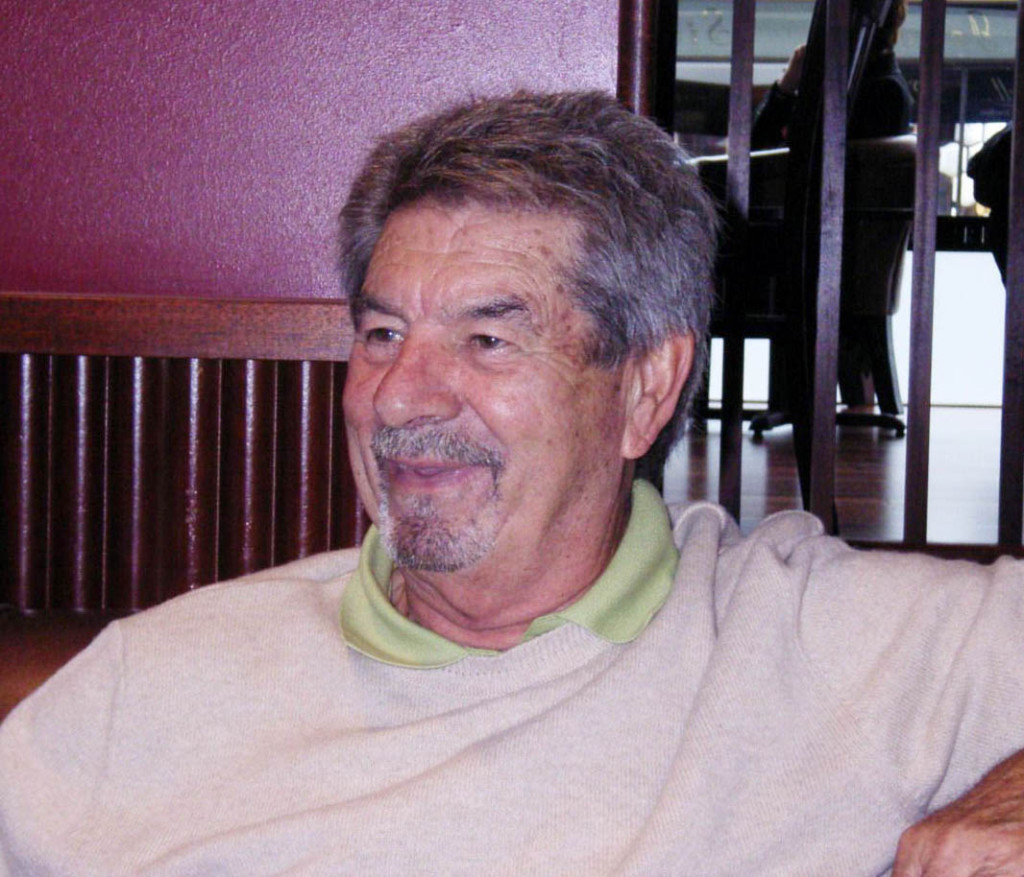 He had recently been diagnosed with flu and died at home on Monday night. Wolves are among those sending flowers to his funeral at the Church of the Good Shepherd in Durban North this Friday morning.

The club have now lost their entire forward line from the 1960 Cup Final, as well as Showell, keeper Malcolm Finlayson and wing-half Eddie Clamp.

Only Gerry Harris, Ron Flowers and skipper Bill Slater remain and they will no doubt be raising a glass to the springbok import who bravely stepped into a new world and made a sizeable mark – as well as a substantial number of friends.