Pride Of The Clans 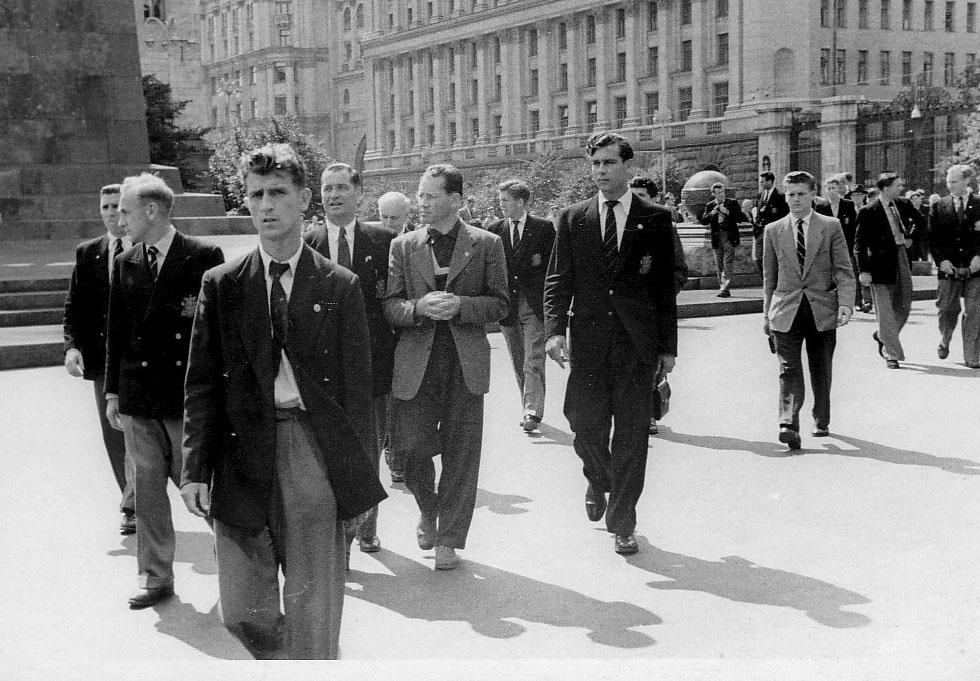 Tommy McDonald leads a star-studded cast on walkabouts in Moscow.

Nothing pleases us more than to be approached by long-lost relatives or friends of Wolves favourites, especially those who are seeking our help in re-connecting them.

We will be writing soon about just such an email that we have received out of the blue regarding a 1960s coach and we are happy in the meantime to share some memories of a football fan who got in touch with us to offer and seek information of a 1950s Molineux reserve from north of the border.

Tom Johnstone is the nephew of the late Tommy McDonald, a right-winger signed as back-up and as a possible successor to Johnny Hancocks in the very month that the club won the League Championship for the first time.

First things first – we are assured that the relevant place of birth here is not Glasgow, as has been stated in the past, but a place quite a lot further east called Hill of Beath, in Fife.

“It is only a wee village of 300-400 inhabitants, right next to Cowdenbeath, but it is also where Jim Baxter was from,” Tom told us.  “By a huge coincidence, another professional footballer named Jim Baxter came from there as well and went on to play for Preston. They were only related in as much as their fathers were cousins.”

The lives of Baxter and McDonald were loosely connected, so, too those of the genial late Rangers and Sunderland midfielder and the man who brought us these recollections.

“When I lived and worked in London, I went to watch Sunderland at Fulham once and was with a mate who didn’t believe I knew Jim,” Tom added.

“As the players got off the coach, Jim recognised me, greeted me with a remark that I had better not repeat here and said: ‘I suppose you will be wanting tickets?’ My pal was well impressed!

“Jim knew my Uncle Tommy, who was always a hero to me because of what he did in the game. He would have seen him around the village when he was growing up because he would go back to Scotland from Wolves, Leicester or whatever for breaks.

“And the two of them were booked together once in a Rangers v Dunfermline game for what he said was banter – and what the referee called misconduct.”

McDonald, born in 1930, played only six League or cup matches for Wolves but showed glimpses of promise by scoring twice in them – in a 5-2 FA Cup victory at Grimsby half-way through his first season at the club and in a First Division defeat at Newcastle the following October.

As a newcomer, he also went on the champions’ end-of-season to Scandinavia in 1954, playing in all three matches, and, more memorably, travelled as part of the squad who broke new ground by visiting the Soviet Union just over a year later.

He played in the closer second game, against Moscow Dynamo, being withdrawn in the intense heat and replaced by Jimmy Mullen.

Tom added: “He was probably unlucky because he was behind such great players at Wolves (after Hancocks, Harry Hooper was a big hit when introduced on Stan Cullis’s right wing in 1956-57) and had been in the shadows of what they called the Famous Five at Hibernian in the early 1950s – the fabulous forward line of Gordon Smith, Bobby Johnstone (no relation), Lawrie Reilly, Willie Ormond and Eddie Turnbull. They were the reason the club won the title in 1951 and 1952.

“In other circumstances, he might have had more of a chance at both clubs but he just found it hard to get in. That’s why he went to Leicester from Wolves in 1956 – he just wanted to play.”

McDonald was a success at Filbert Street, scoring 27 times in 113 games for them and helping them to promotion under Dave Halliday. So why didn’t he stay at a club who reached the FA Cup final twice in the early 1960s?

“His wife, Betty, wasn’t happy living there,” Tom said. “He did do well for them and might have played plenty alongside Hugh McIlmoyle.

“But, in 1960, Jock Stein took him to Dunfermline – the club I support – as his first signing. He also happened to mention that Willie Cunningham wanted to get back to Scotland as well, so the two of them moved together.

“Willie went on to manage Dunfermline but Uncle Tommy’s misfortune followed him there. He played in every round of the Scottish Cup run in 1960-61, including the semi-final, but then contracted appendicitis before the final against Celtic at Hampden Park and couldn’t play.

“By a big coincidence, the Celtic left-back, who I think was called Kennedy, was out because he had appendicitis as well. Dunfermline won but only the players on the pitch in the final received a medal in those days, so the club presented him with a gold watch instead.

“He had the consolation of scoring Dunfermline’s first ever goal in Europe – against St Patrick’s from Dublin in 1961-62. They also faced Everton in the competition.

“I didn’t see much of his career because I was often playing, albeit only at a junior level, but I recall watching him for Hibs one New Year and play against Newcastle for an Edinburgh Select XI at Tynecastle. Socially, I used to see him at my grandmother’s house. She was his mother and my dad’s sister.

“Even when I was in my 40s and he was telling me to address him just by his Christian name, I always called him Uncle Tommy because that’s the way I was brought up. And it’s no accident that I have the same first name as him…..names were passed down the family like that.”

McDonald wound down his playing career with Raith, Cowdenbeath and others but declined Stein’s offer of a coaching job at Dunfermline.

He managed a non-League side for a while but was content to work until his retirement in the mid-1990s in the toll booths on the Forth Road bridge.

Tom reminds us that his uncle passed away, through illness, in 2004 at the age of 74. 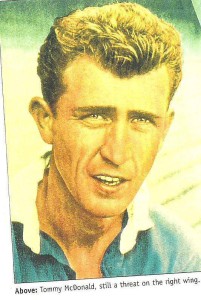 The younger man, who is himself now approaching 70, has lived in England for decades, having initially taken a post in London, then moved to the Passport Office in Peterborough and more recently headed further north again to his present residence in Lincoln.

He has an English wife and plans a trip to Molineux before long as it’s the only club his uncle played for which he hasn’t visited. The only Wolves game he is sure he has seen is one at Fulham in the late 1960s.

McDonald was the holder of a single Scotland B cap.