Action! How The Camera Rolled On 1967 Run-In

Resurfacing Of Obscure Away Days Film 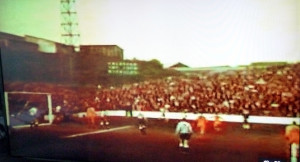 Wolves on the attack at Millwall on April Fool’s Day, 1967……as taken from old footage of the game.

An insight into the travelling habits of Wolves supporters almost half a century ago has come to light with the discovery of old footage buried away in the club’s store-rooms.

Our eye was caught among a mountain of stand-by Molineux Museum items by a film called ‘Wolves: The Road To Promotion 1967’.

We will be honest straightaway and say the product will never be good enough to market as a saleable souvenir but it nevertheless contains some interesting clips of the run-in to the season that saw Ronnie Allen’s side go up as runners-up to Coventry.

The film, presumably captured on a cine camera and without any sound, is of modest quality but contains what are almost certainly the only surviving moving pictures of five out of the last six away matches – possibly the only action footage there has ever been of those games.

The whole feature is no more than half an hour long and starts with the March 18 trip to Plymouth with some interesting stitched-on commentary by an unidentified local voice.

Over the sight of a fleet of 12 red coaches that we assume were being used to ferry some of the Wolves support present in an 18,381 crowd at Home Park, we are told that the M5 ran only as far as Gloucester in those days.

The narrator adds that The Beatles’ Yellow Submarine was popular at the time – ‘but a rendition from the back of the coach at two o’clock in the morning was not welcome.’

Whether that was the time they departed for Devon or returned from there is not clear but we see Derek Dougan and Ernie Hunt obliging autograph hunters as they make their way towards the players’ entrance. Managing a brisker stride to the dressing room area are Peter Knowles and Dave Woodfield while Bobby Thomson and Joe Gardiner are captioned on screen as they make their way in through a group of fans, albeit Gardiner looks much more like Jack Dowen!

The main detail from the day was that Knowles scored the only goal on what was The Doog’s debut. The goal is not captured on film. In fact the clips of the game are condensed into an inconsequential few seconds, which do little more than show that Wolves played in all gold and the ground is more open to the surrounding hillside than it is today.

On to the next trip…….Huddersfield on Easter Monday. “Up through the Peak District and over The Pennines,” we are informed by way of an intro. “There was no M62 at that time.” We told you this production lifted a lid on what it was like following the team in that era.

The camera operator clearly believes that shooting the teams running out is all part of the job, so we see them entering the Leeds Road arena, the home side unfamiliarly dressed in plain blue shirts rather than their famous stripes.

We can detect through the grainy footage a flurry of attacking by Wolves but the winning goal is again absent, even if the narration tells us that they beat the same opponents by the same score (1-0) at Molineux the next day.

The April 1 entry starts with a shot of Big Ben, then the Houses of Parliament and finally Downing Street. Obviously no M25!

On to The Den and we see Knowles, Allen, John Holsgrove and Mike Bailey walking from the coach to the players’ entrance, the skipper in a stylish-for-the-day sheepskin coat.

The action clips from the ‘hard-fought’ 1-1 draw with Millwall are brief but there is some panoramic panning around one of the lost grounds of English football before we are done.

Preston next a fortnight later. The camera is out once more on the car park and it’s easy to get the idea that the players were not molly-coddled in those days by having their coach pull up behind barriers as a safety measure.

Dave Wagstaffe, Doog, Knowles, Gerry Taylor and Phil Parkes thread their way through supporters before making their way inside, gold and black scarves being visible on some young fans nearest the entrance. We also see Thomson and Woodfield making the same walk, as well as director George Clark, who, helpfully, is given a caption on screen, before there’s a glimpse of Bailey looking out across the tarmac from an open doorway.

There was evidently more reel available for this game than any of the others, with the camera person again seated in the stand. He seems to capture Wolves’ goals, both scored by Hunt, although it is from a considerable distance. We can see raised hands on the terraces below – evidence of the fact that a smattering of Wolves followers were in an area generally occupied by home supporters and underlining how there was no segregation of rival fans in those days.

It is just possible to make out some Wolves players, especially Waggy on the left when he is on ‘our’ side and attacking the nearer goal. But the quality remains more miss than hit.

The Coventry game is not mentioned or covered. Presumably, a Highfield Road packed with more than 51,000 spectators was deemed no place for a fan with a cine camera, so on we skip to Crystal Palace on the final day.

We are told as some clips of an empty, sun-kissed Selhurst Park are taken that the title is already in the Sky Blues’ keeping. Not right. At the time Wolves’ entrance to the field is once more captured – the teams ran out separately back then, of course, rather than walk out side by side for hand-shakes and other ceremony – they could still have become champions had results worked out right.

Alas, Palace won 4-1 and the narrator summises as he refers to a ‘lack-lustre performance’ that Allen’s men might have had their minds instead on their forthcoming mission as Los Angeles Wolves.

Never mind going to America for a month and a half, the youngsters of St Church choir were just excited to be on a day out in London as they were filmed, in a long line, in their scarves, hats and, in some cases, rattles. 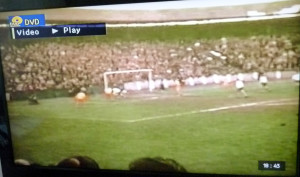 More grainy footage shows Wolves pushing on their way to victory at Preston.

It was a disappointing day but the season and run-in still gave Wolves fans plenty to sing about.

* Although this film was shot 48 years ago, the narration would appear to have been added many years later – certainly after the motorways were built or extended. And the fact that it has been copied on to a dvd that we borrowed suggests it has at least been handled in the 21st century. It is also advertised at the end as being a Cheshire Cat production.