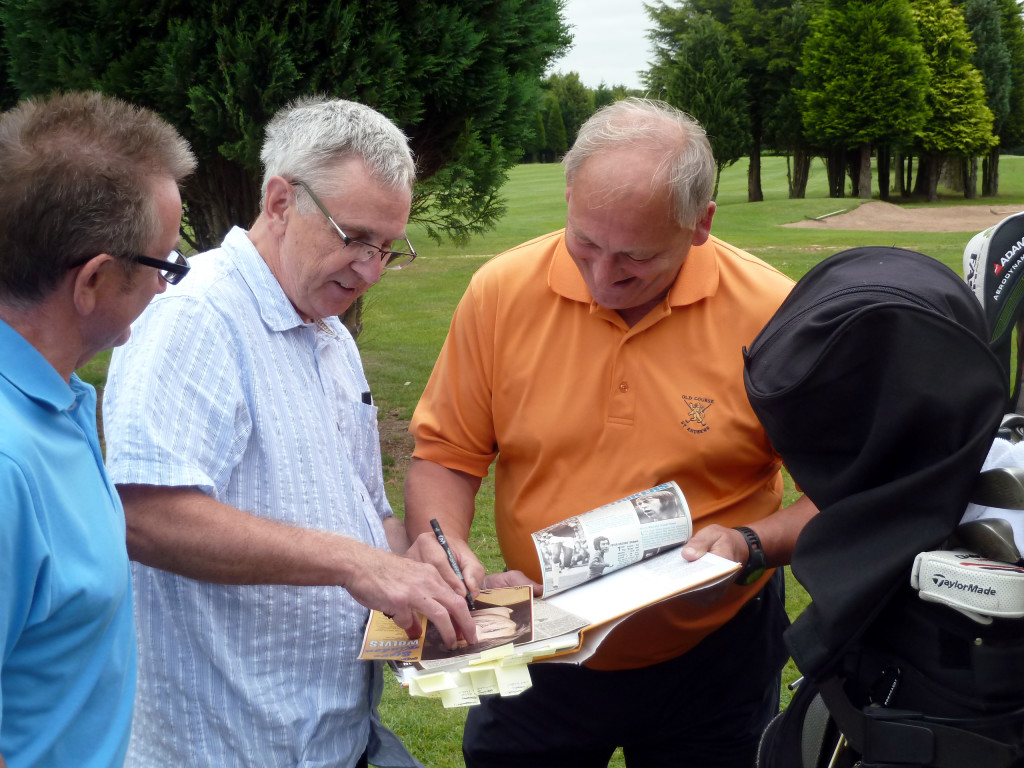 From as far afield as Blackpool, Leicestershire and rural Gloucestershire, they gathered once more yesterday – for some competition, some teamwork in the name of charity and, above all, some more fun in each others’ company.

The washing-out of the annual Wolves Former Players’ Golf Day a week earlier had a silver lining, even if it wasn’t immediately obvious to the supporter who drove from Torquay and was coming through Wednesbury when he received the ‘no play today’ call.

On the other side of the coin, Willie Carr was away on holiday then, playing some golf in Yorkshire as it happens, and was glad to have been able to take part after all.

There was some irony in the fact that one of the 1970s annuals carried by an autograph hunter contained a photo of he and Ernie Hunt in Coventry colours during a summer-tour fixture in Japan that was played in the sort of near-monsoon conditions that caused the postponement eight days ago.

The ginger-haired midfielder is one of many keen supporters of events like this and was able to give a little local knowledge, if any were needed, to Kenny Hibbitt. This was a first visit to the impressive Wergs venue, near Tettenhall, for Kenny – another member of the ‘engine room’ stoked up by John Barnwell and Richie Barker for the 1980 League Cup final.

Over bacon baps and coffee in the clubhouse, Steve Kindon was trying and failing to jog Hibby’s memory about a round they shared at the Parkstone championship course in Dorset when Wolves were down in the Bournemouth area 40 years or so ago.

No such confusion or unfamiliarity for Steve Daley, whose wife and co-organiser Lyn works in the offices at The Wergs. He was thrilled to have attracted Middlesbrough-supporting comedian/impressionist Kevin Connelly and ex-Liverpool and Wales full-back Joey Jones as after-dinner ‘turns’ as well as assembling a star-studded field.

Such was the abundance of recognisable Wolves faces that it was easy to overlook the presence of the former Manchester United and Scotland defender Martin Buchan, who was in opposition to Ronnie Allen’s Wanderers in the famous Los Angeles final of 1967. 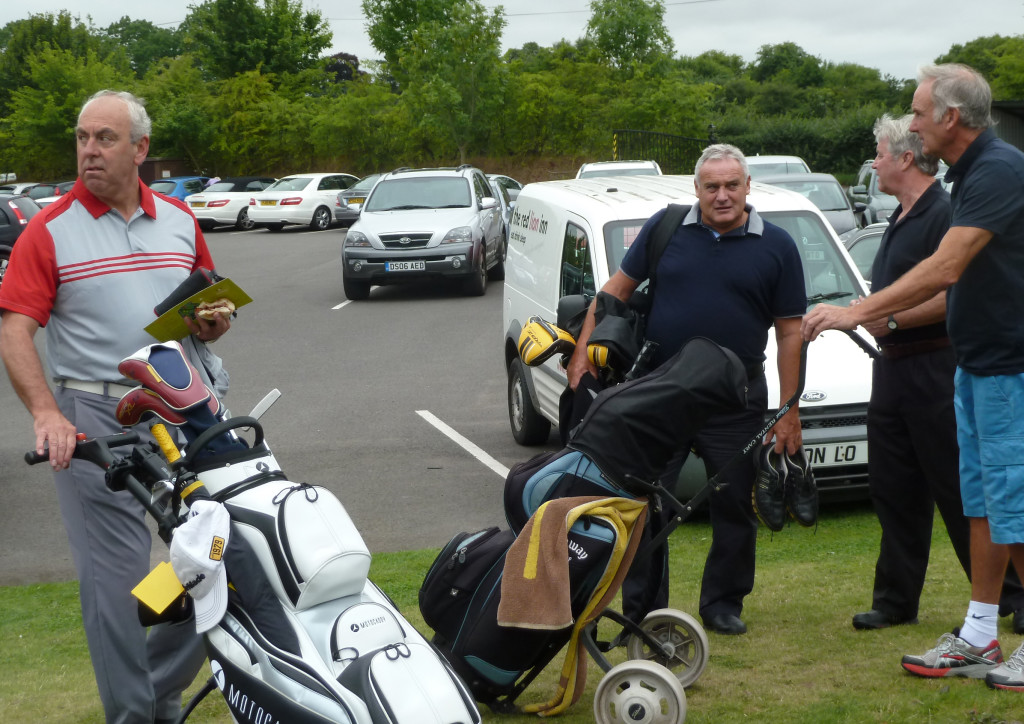 Dave Jones (centre), with Geoff Palmer on the left and Phil Nicholls to the right.

Dave Jones was there yesterday, too; a rare appearance, this, for him on the Former Players ‘circuit’, although he is now living in Bridgnorth and talking enthusiastically about the prospect of working abroad. Finland? Costa Rica even?

Colin Brazier laughed off suggestions that he was becoming a serious golfer by pointing out to those who remembered seeing him at Astbury Hall in April that this was only his second game of the year. And he reckoned his attendance at the recent Wolves v Newport game was only his third visit to Molineux as a spectator since leaving the club for Jacksonville Teamen in 1981.

The surprises didn’t end there. Welcome as well to Micky Holmes, the goal-scoring midfielder from the early Bully years. “I’m not involved in football now, except with staying in touch with lads like Jon Purdie and Jackie Gallagher,” he said. “I sell stair-lifts during the week and play golf on a Saturday. I’m happy with that.”

Gerry O’Hara, from just up the road in Codsall, added his own cheerful presence and, among the former Wolves youngsters in attendance were Phil Nicholls and Archie Richards. From the other end of the Molineux appearance scale came Geoff Palmer, albeit something of a last-minute lunchtime arrival, having spent the morning working. 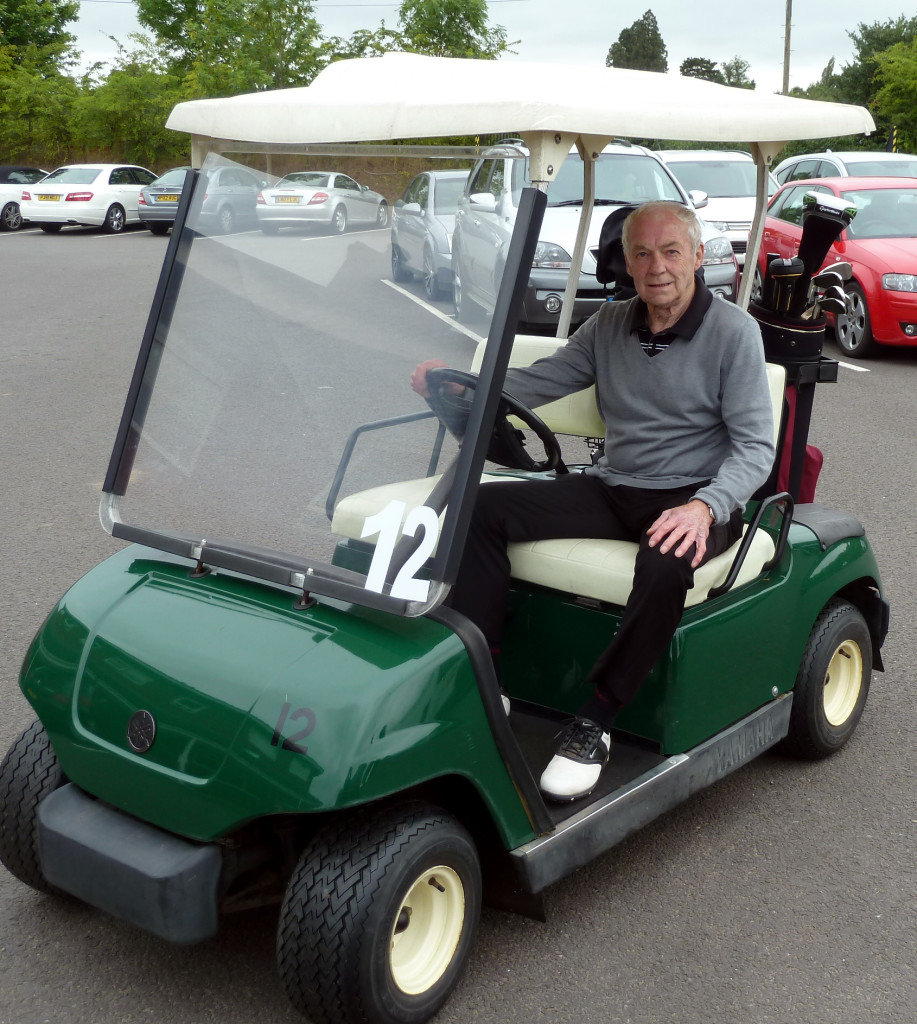 Terry Wharton, greeted as usual as ‘Dad’ when first seen by Phil Parkes, doesn’t have such problems these days and had a friendly warning for Mel Eves as they set off together in a buggy. Terry, a long-time former taxi driver, inevitably took the wheel and said: “Evesy, I don’t mind your phone going off while we’re in the car park but if it goes off on the course, I’m tipping you out!”

Oh, remember that line from a couple of weeks ago about how Danny Hegan stories always circulate when his former colleagues meet up?

Lofty and Mel were among around 150 guests at Danny’s funeral in South Birmingham on Thursday and the keeper’s flair as a raconteur didn’t let him down yesterday…..

We heard the one about how he went out for some pop in mid-winter in his vest, shorts and flip-flops and didn’t return for four days; the one about how he was set about by his wife with a wooden shoe after he jumped into Lofty’s bed following a night out; and the one about how the other players braced themselves for not seeing him in training the next day whenever he opened a conversation with the remark: ‘Lads, I’ve not had a drink for a fortnight….’

* We trust our readers understand why we have posted a day later than usual at the end of this week in order to give a report of yesterday’s proceedings.