‘Tis The Season For Golf As Well 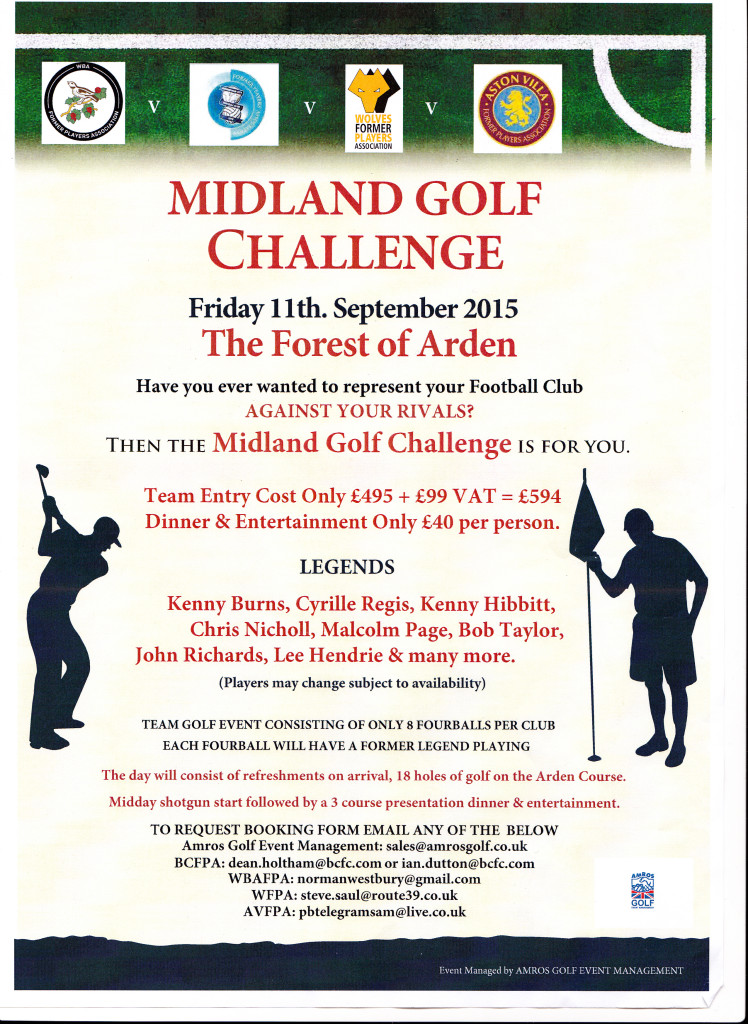 On course for an all-star day.

Monday, August 3: Two more golf dates have, hopefully, made it into our diary. Former Wolves players have their annual visit to the Wrottesley Park par-three course at Perton on Sunday, September 13, and a representation from the club are due to tee off alongside their counterparts from Albion, Villa and Blues in the Midland Golf Challenge at the impressive Forest of Arden on Friday, September 11. Teams of four for the Arden course cost £594, including 18 holes of golf, three-course dinner and entertainment, with more information available from Steve Saul at steve.saul@route39.co.uk

Monday, August 10: We can always rely on Steve Gordos for a quirky take on names – it must have been all those years of writing headlines on the back page of the Express & Star. He wrote in an email to us today: “It may have crossed your mind after Sheyi Ojo played for Wolves on Saturday that he joins a select band of Wolves players with only three letters in their surname. Alex Rae was the last, I believe, and before him were Havard Flo, Bob Coy, Roger Eli and Jesse Pye. I looked up the list in Tony Matthews’ book and also found Vic Fox, Albert Kay, George Lax and Tansey Lea from the 1920s era, plus a George May from 1908-10. That’s a whole team, alas no goalkeeper! There should be more three-letter players – think of the saving on shirt letters.”

Friday, August 14: Has there ever been a start like this to a Wolves season? As if the friendly against Villa and the visits of Hull and QPR hadn’t already given us a lively first couple of weeks, Tuesday’s Capital One Cup victory over Newport has now been followed by another home pairing, this time against Barnet. A difficult time for the compilers and publishers of the Wolves programme – hence my summons on proof-reading duties for a few hours yesterday.

Wednesday, August 19: How many former Wolves players can you squeeze into one press box? Among us for the visit of QPR to Molineux tonight were Matt Murray, Mel Eves, Andy Thompson, midfielder Paul Jones, Steve Froggatt and Steve Claridge.

Friday, August 21: Spoke by phone at the request of an autograph hunter at today’s annual ex-players golf day to Fred Kemp and asked to pass on my best wishes to his son-in-law John Marshall – the former Fulham stalwart who has recently joined Wolves’ staff.

Monday, August 24: Received an email from Lyn and Steve Daley saying that another good four-figure sum is on the way in as a result of Friday’s Former Wolves Players golf day at The Wergs. Final numbers are still not clear but a healthy donation will soon be on the way to the Maureen Parkes Breast Care Fund, Compton Hospice, Little Hearts Matter and Breakthrough Breast Cancer.

Thursday, August 27: Was surprised and delighted during a day’s working in Wolves’ media office to hear that Keith Downing is now coaching England under-20s. I had just interviewed Dominic Iorfa and chatted with him about his role in the side last season under Ady Boothroyd, who now appears to have moved down to the country’s under-19s.

Saturday, August 29: Was gutted to miss seeing Jackie Gallagher on his visit to Molineux today. The late 1980s forward rang me last night to say he was coming to the Wolves v Charlton game and doing some corporate work but our paths refused to cross. 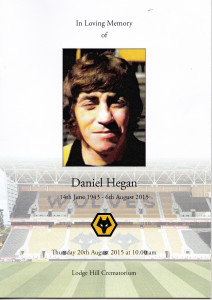 Sunday, August 30: Gleaned a bit more news about Danny Hegan following his funeral earlier this month and read an order of service which Mel Eves has kindly lent us. It transpires that Danny was one of nine children.